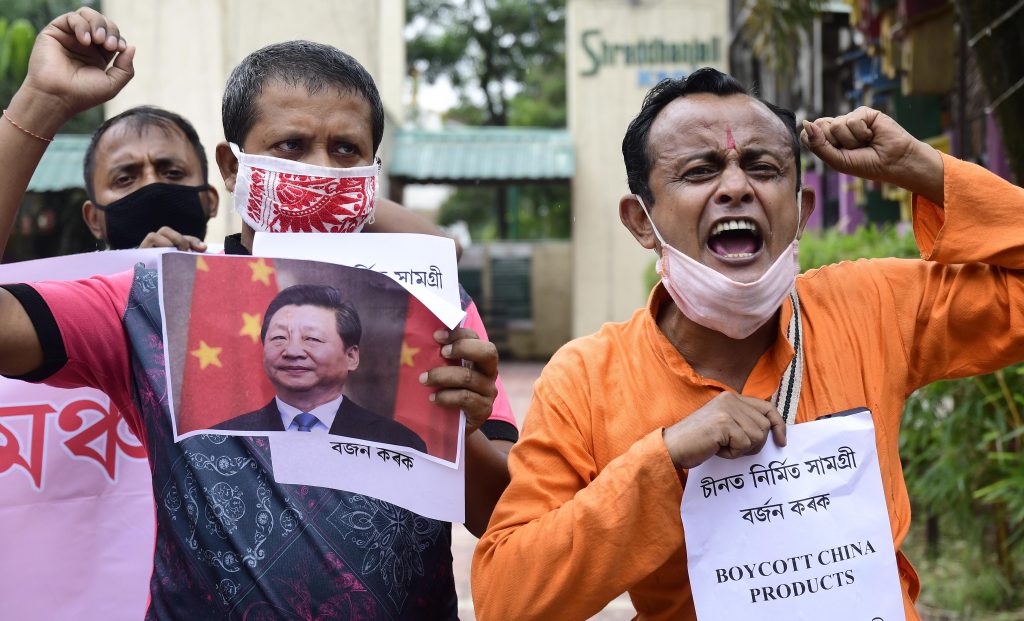 India said Thursday it was using diplomatic channels with China to de-escalate a military standoff in a remote Himalayan border region where at least 20 Indian soldiers were killed this week.

“Making exaggerated and untenable claims is contrary to this understanding,” he said in a statement.

Monday’s clash that killed 20 Indian troops was the deadliest between the sides in 45 years. China has not said whether it suffered any casualties. India also denied reports that any of its troops were in Chinese custody.

Both sides accused each other of instigating the clash in the valley, part of the disputed Ladakh region along the Himalayan frontier.

In the thin air at 14,000 feet above sea level, soldiers brawled with clubs, rocks and their fists, but no shots were fired, Indian officials said. Neither side’s patrolling soldiers can use firearms under a previous agreement in the dispute.

Defense analyst Ajai Shukla tweeted a photo of rods studded with nails that were purportedly used by Chinese troops.

China maintained that Indian troops had deliberately provoked the clash, though it also signaled it wanted talks, noting the importance of their broader bilateral relationship.

“After the incident, China and India communicated and coordinated through military and diplomatic channels,” he said at a daily briefing. “The two sides agreed to deal fairly with the serious events caused by the conflict in the Galwan Valley, and … cool down the situation as soon as possible.”

But emotions were high in the south Indian city of Hyderabad, where thousands watched the funeral procession of Indian Col. Santosh Babu. He was among the 20 Indian soldiers who officials said died of injuries and exposure after the clash in the area’s subfreezing temperatures.

In McLeod Ganj, a city in the Himalayan state of Himachal Pradesh with a large community of Tibetan refugees, demonstrators shouted anti-China slogans and burned the Chinese flag.

An Indian confederation of small and midsize companies called for a boycott of 500 Chinese goods, including toys and textiles, to express “strong criticism” of China’s alleged aggression in Ladakh.

The call for a boycott followed protests Wednesday in New Delhi where demonstrators destroyed items they said were made in China while chanting, “China get out.”

The Himalayan clash has fanned growing anti-Chinese sentiments due to the coronavirus. India counts more than 366,000 virus cases and 12,200 deaths.

But a broader boycott could backfire for India if China chose to retaliate by banning exports of the raw materials used by India’s pharmaceutical industry.

India’s External Affairs Minister, Subrahmanyam Jaishankar, said all Indian troops at Galwan were carrying arms on Monday. But under 1996 and 2005 agreements between the two countries, they are not supposed to use firearms during confrontations, he said on Twitter.

He was apparently responding to criticism by opposition Congress party leader Rahul Gandhi who wanted to know “Why were our soldiers sent unarmed to martyrdom?”

The clash escalated a standoff in the disputed region that began in early May, when Indian officials said Chinese soldiers crossed the boundary at three different points, erecting tents and guard posts and ignoring warnings to leave. That triggered shouting matches, stone-throwing and fistfights, much of it replayed on news channels and social media.

Wang, China’s foreign minister, warned New Delhi not to underestimate Beijing’s determination to safeguard what it considers its sovereign territory. His comments came in a phone call Wednesday with Jaishankar.

Jaishankar, in turn, accused China of erecting a structure in the Galwan Valley, which he called a “premeditated and planned action that was directly responsible for the resulting violence and casualties,” according to a statement.

He added that the incident would have “serious repercussions” on India’s relationship with China, but that both sides were committed to further disengaging in the remote Himalayan plateau.

While experts said the two nations were unlikely to head to war, they also believe easing tensions quickly will be difficult.

India unilaterally declared Ladakh a federal territory while separating it from disputed Kashmir in August 2019. China was among the handful of countries to condemn the move, raising it at international forums, including the U.N. Security Council.

India on Thursday was elected to a seat on the Council.

Thousands of soldiers on both sides have faced off over a month along a remote stretch of the 2,100-mile Line of Actual Control, the border established following a war between India and China in 1962 that resulted in an uneasy truce.