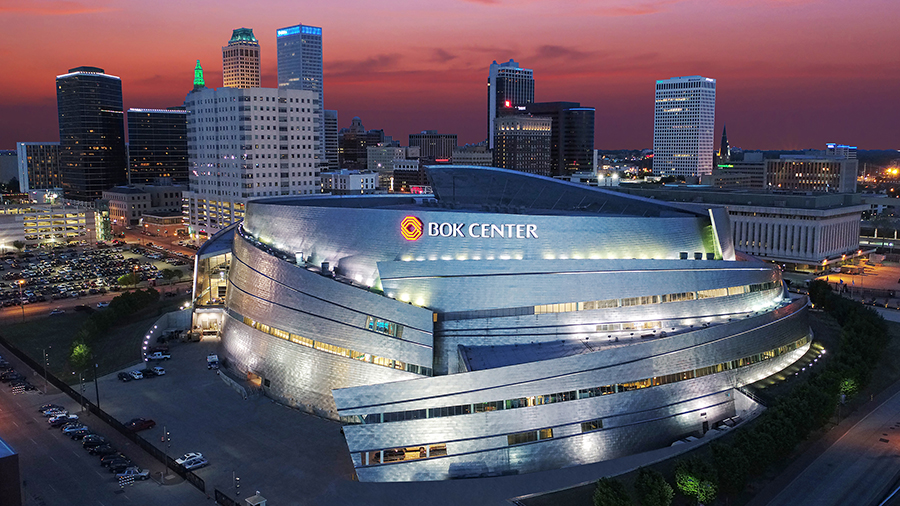 The managers of the arena in Oklahoma where President Donald Trump plans to hold a controversial campaign rally requested on Thursday that the Trump campaign provide a detailed written plan outlining “health and safety” measures ahead of the event to prevent the spread of the coronavirus, according to a statement from the venue.

The rally is planned for Saturday evening at the BOK Center, a 19,000-seat venue in downtown Tulsa. According to the arena management’s statement, the campaign has already said it will offer masks, hand sanitizer and temperature checks to everyone who attends. The statement added that facility staffers will be tested for the coronavirus and that the venue will be “cleaned and disinfected repeatedly throughout the event, with special emphasis on high-touch areas.”

A number of Tulsa residents and business owners, alarmed by the prospect of a large-scale outbreak of coronavirus if the rally proceeds, have sued the venue manager attempting to block the event unless it is held in accordance with social distancing guidelines from the Centers for Disease Control and Prevention. A Tulsa County judge on Tuesday denied the request for a temporary injunction, but the decision was appealed to the Oklahoma Supreme Court.

An officer for the state Supreme Court on Thursday afternoon heard arguments in a conference call with opposing sides and said the court would decide the issue Friday.

During the hearing, Paul DeMuro, one of the attorneys for the plaintiffs, said that “an indoor mass gathering such as this, without adherence to the CDC guidelines, creates grave, imminent and certain public risk to the community.”

Joseph Farris, an attorney for ASM Global, a Los Angeles-based company that manages the city-owned BOK Center, conceded that there were risks inherent in hosting such an event during a pandemic.

“We certainly agree that the CDC and other relevant medical experts believe that this type of event is ill advised,” Farris said. “No question about it. And we don’t argue that the CDC . . . classifies events like this as presenting the highest possible risk.”

“We’re certainly not hiding our head in the sand on this,” he said.

But he added that the June 10 license agreement with the Trump campaign to use the BOK Center for its rally establishes that attendees will have their temperatures checked and be provided masks, and that there will be signage posted indicating “people suffering from covid symptoms should not go inside.”

“So there’s not much more we can do other than ask the licensee adhere to these rules and regulations,” he added. “We can’t prevent someone who’s otherwise qualified to sign contracts and adhere to those contractual obligations, like this event, regardless of the nature of the event.”

Farris added that the public interest in the “right to peaceable assembly under the First Amendment is at least equivalent” to the “legitimate concerns about the potential health effects of this gathering.”

In a rebuttal, DeMuro called it a “pretty shocking admission to say we know this event is going to be dangerous.”

“What they can do about it is shut it down,” he said.

He added: “Nineteen thousand people, chanting and screaming and yelling in a big box in the middle of the worst pandemic we may have ever faced as a country – it’s madness to let this event go forward.”

Trump campaign spokesman Tim Murtaugh said in an emailed statement: “We’ve received a letter from arena management and we’re reviewing it. We take safety seriously, which is why we’re doing temperature checks for everyone attending, and providing masks and hand sanitizer. This will be a Trump rally, which means a big, boisterous, excited crowd. We don’t recall the media shaming demonstrators about social distancing – in fact the media were cheering them on.”

If the lawsuit prevails, it could require the venue manager to postpone the event or dramatically reduce the number of people allowed inside, to keep people some distance apart. But the specifics remain unclear.

The CDC has not issued firm guidelines about political rallies. Last week, the CDC issued “considerations” for events and gatherings. Jay Butler, the deputy director for infectious diseases at the CDC, said the “most important things” involve social distancing, hand hygiene and encouraging face coverings. Asked about indoor rallies or political conventions, Butler said: “The guidelines I think speak for themselves. And they are not regulations. They are not commands. But they are recommendations or even suggestions.”

Tulsa Health Department Executive Director Bruce Dart said at a Wednesday news conference that he had recommended the rally be postponed until it was safer. “I know so many people are over covid,” Dart said. “But covid is not over.”

Cases in Tulsa have spiked in recent days. As of Thursday, there were 1,945 confirmed coronavirus cases in Tulsa County and 65 deaths.

Eric Feigl-Ding, an epidemiologist at Harvard University’s Chan School of Public Health, said that Oklahoma has the second-fastest-growing per-capita rate of new coronavirus infections in the country, based on a seven-day average. As of Thursday, infections were up 140 percent in the state, according to estimates by the Federation of American Scientists, a nonpartisan policy institute where Feigl-Ding is a senior fellow.

Trump and others have said that about 1 million people have requested tickets to the event.

Oklahoma Gov. Kevin Stitt, a Republican, during a roundtable at the White House on Thursday for an event on small businesses reopening, said that “it’s just going to be amazing.”

“Oklahoma is ready for your visit,” Stitt said. “It’s going to be safe, and we’re really, really excited.”

Trump said during his remarks that the rally will have a “crowd like I guess nobody’s seen before.”

“We have tremendous, tremendous requests for tickets like I think probably has never happened politically before,” Trump said. “And one of the reasons we chose your state, as you know, Kevin, was that you’ve done so, so well with the covid, you’ve handled it incredibly well.”