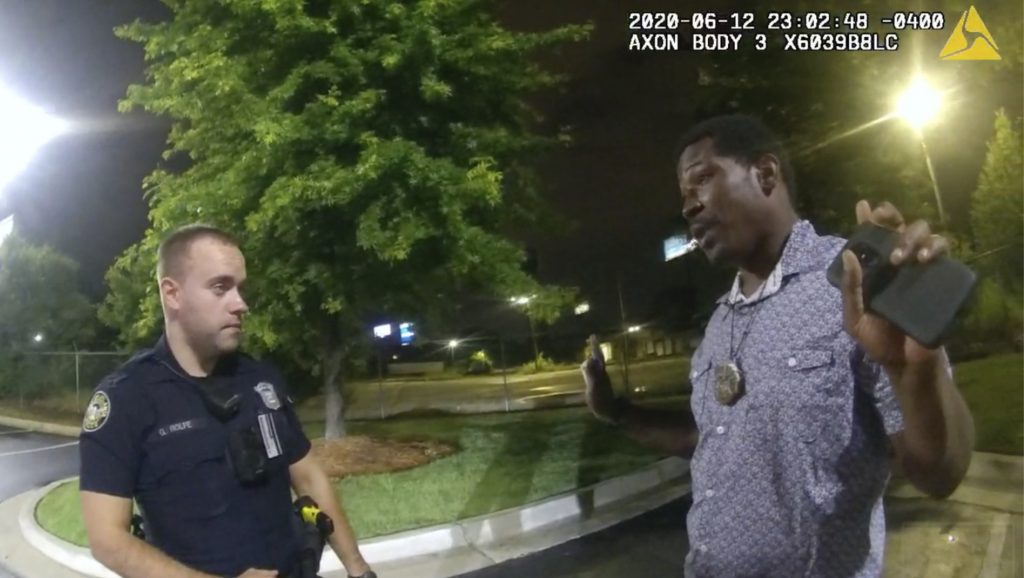 Prosecutors brought murder charges Wednesday against the white Atlanta police officer who shot Rayshard Brooks in the back, saying that the black man posed no threat when he was gunned down and that the officer kicked him and offered o medical treatment as he lay dying on the ground.

Brooks was holding a stun gun he had snatched from officers but was 18 feet, 3 inches away when he was shot by Garrett Rolfe and was running away at the time, District Attorney Paul Howard said in announcing the charges five days after the killing outside a Wendy’s restaurant rocked the city.

The felony murder charge against Rolfe carries life in prison without parole or the death penalty. He was also charged with 10 other offenses punishable by decades behind bars.

“Mr. Brooks never presented himself as a threat,” Howard said.

A second officer with Rolfe, Devin Brosnan, stood on a wounded Brooks’ shoulder as he struggled for his life, according to Howard. Brosnan was charged with aggravated assault and other offenses but is cooperating with prosecutors and will testify, according to the district attorney, who said it was the first time in 40 such cases in which an officer has come forward to do this.

Rolfe was fired after shooting, while Brosnan was placed on leave.

The district attorney said Brosnan is cooperating with prosecutors and will testify, saying it was the first time in 40 such cases in which an officer had come forward to do so. But an attorney for Brosnan emphatically denied he had agreed to be a prosecution witness and said he was not pleading guilty to anything.

Ahead of the district attorney’s announcement, Rolfe’s lawyers issued a statement saying the officer feared for his safety and that of others around him and was justified in shooting Brooks. Rolfe opened fire after hearing a sound “like a gunshot and saw a flash in front of him,” apparently from the stun gun.

“Mr. Brooks violently attacked two officers and disarmed one of them. When Mr. Brooks turned and pointed an object at Officer Rolfe, any officer would have reasonably believed that he intended to disarm, disable or seriously injure him,” the lawyers said.

But the district attorney said the stun gun that Brooks held had already been fired twice and was thus empty and no longer a threat.

Brosnan’s lawyer, Amanda Clark Palmer, said the charges against the officer were baseless. She said Brosnan stood on the wounded man’s hand, not his shoulder, for a short period of time — seconds — to make sure Brooks did not have a weapon.