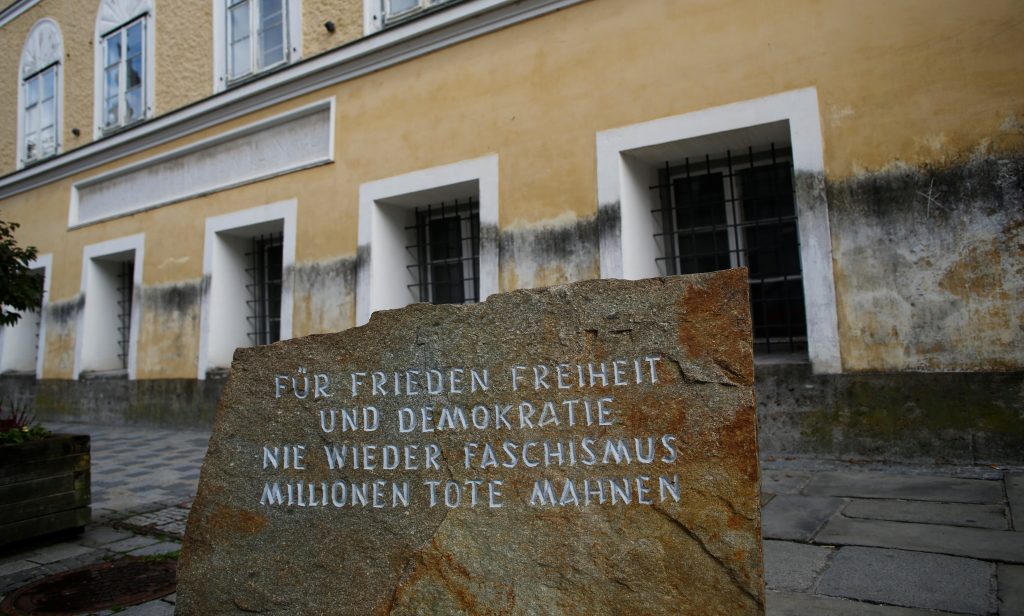 As anti-racism protesters topple statues of slave traders and colonizers worldwide, some nations are pondering how to mark their dark past. In Austria, debate over confronting one link to Adolf Hitler has taken decades, and it’s not over yet.

Austria recently unveiled plans to convert the house where the Nazi leader was born, in the town of Braunau am Inn on the German border, into a police station.

It also suggested moving a rock that stands on the sidewalk outside, which is inscribed with an anti-fascist message, to a Vienna museum.

While many agree that the house should not be allowed to become a pilgrimage site for neo-Nazis, the idea of removing the rock has upset some Jewish and survivors’ groups who have said that Austria must confront its role in the Holocaust.

More consultations on the rock will now be held.

“Clearly (the government) wants to let the world forget that the worst mass murderer in history was born in Braunau,” said Willi Mernyi, head of the Mauthausen Committee, Austria’s main Holocaust survivors’ group.

“This approach is wrong … One must recognise what happened.”

The rock, which carries the inscriptions “fascism never again” and “millions of dead” but does not mention Hitler, was installed by the town in 1989.

At that point, Austria was moving away from its position of denying responsibility for the Holocaust, a post-war stance during which it described itself as the first victim of the Nazis.

Partly because of that, some say that Austria has done less to confront its Nazi past than neighboring Germany.

“Sometimes it feels like something that is done as a chore rather than a commitment made out of deep conviction,” said Gerhard Baumgartner, a historian and scientific director at the Documentation Centre of Austrian Resistance.

While progress has been made in terms of education on the Holocaust and erecting memorials since the 1980s, Jewish and survivors’ groups say more remains to be done, especially in explaining how widespread and systemic the Nazis’ crimes were.

“That is very important – that people really know there was something everywhere,” said Charlotte Herman, head of the group officially representing the Jewish community in the province of Upper Austria, which includes Braunau.

She and Mernyi mentioned the “Stolpersteine”, or “stumbling blocks”, project as one way to raise awareness.

Originally a German initiative, it involves laying small brass plaques to Holocaust victims in the pavement at relevant places, like where they lived.

Those plaques cover a fraction of Holocaust victims, but are a relatively common sight in Vienna, where a notoriously repressive and anti-Semitic system was put in place with local support after Hitler’s Germany annexed Austria in 1938.

“In all of Austria, in every corner, in front of almost everyone’s door, something happened, whether it’s death marches, people walking past and dying in the street,” said Herman.

Hitler’s role in history is well known, so there is no need to spell it out in great detail at the house, she added. But attention should be called to the building.

“Because this is where evil was in fact born.”