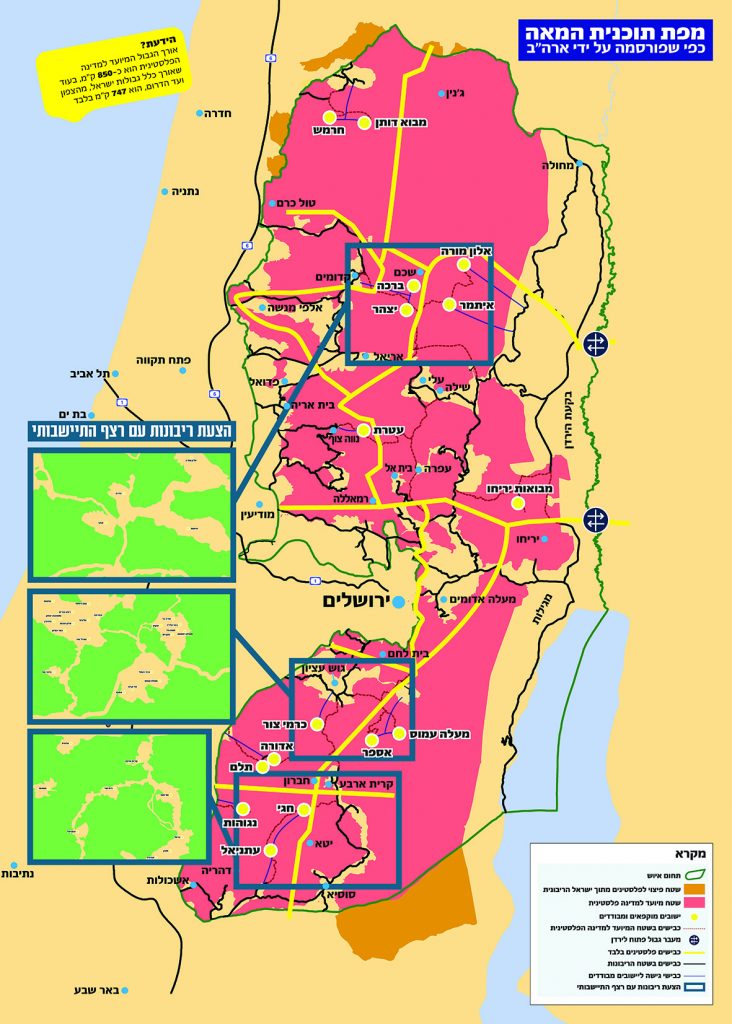 As July 1, the date of Israel’s expected annexation of communities in Yehudah and Shomron and the Jordan Valley, looms, heads of the Yesha Council are trying to curb, or at least amend, President Donald Trump’s peace plan.

On Wednesday, the Yesha Council released a map they say promotes Israel’s interests: Jewish territorial continuity will be preserved and construction freezes in territory and communities in Yehudah and Shomron will be avoided.

The issue has already led to clashes between Yesha leaders and Prime Minister Binyamin Netanyahu, who is a staunch supporter of the U.S. plan.

As part of their alternative plan, the heads of the Yesha Council hope to avoid leaving 19 communities as isolated enclaves within Palestinian territory. They want to connect the isolated communities to the larger blocs without exceeding the 30% of Yehudah and Shomron that the U.S. plan stipulates will be under Israeli rule.  As such, the alternative plan proposes to expand the enclaves so their borders connect with the larger communities, thus creating territorial contiguity.

For example, the territory of the Ma’ale Amos and Asfar communities in the southern Shomron would be expanded and connected to the Gush Etzion junction.

Similarly, the plan calls for the roads in the northern Shomron connecting Itamar, Har Bracha, Elon Moreh and Yitzhar to become part of the enclave itself and then expanded to Tapuach Junction when the areas around them are annexed. In exchange for these additional areas, the Yesha leaders are ready to postpone the annexation of other areas that under the Trump plan should be under Israeli sovereignty.

They argue that annexation can be delayed in some places, such as the area near Highway 443, west of Yerushalayim, where thousands of Palestinians live, so as to not exceed the 30%.

Many maps showing the alternative proposals have already been drawn up. The Yesha leaders have already submitted the map to the Americans and are preparing to widely distribute them in the coming days.

Yisrael Hayom reports that Prime Minister Binyamin Netanyahu is considering a two-stage plan to implement Israeli sovereignty. According to the report, the first stage would entail the application of sovereignty to communities located outside the large blocs in Yehudah and Shomron, about 10% of the territory, as opposed to the 30% the Trump plan allows for.

Once that step is complete, Israel will reach out to the Palestinian Authority and ask it to resume negotiations for a peace agreement. If the Palestinians refuse, Israel will proceed with the second stage and apply sovereignty to the rest of the communities in Yehudah and Shomron.

As per the report, there are several considerations that prompted the prime minister to consider a two-stage plan to implement sovereignty. First, he expects that the revised plan will send a signal to the international community and the region that Israel listens to their criticism and acts cautiously. Second, a two-stage implementation is also expected to suit the White House, which sees the Trump plan as a peace plan rather than a plan for annexation. The Trump administration wants the Palestinians to realize that time is not on their side, so calling on Palestinian Authority Chairman Mahmoud Abbas to come to the table between the first and second stages of the plan’s implementation serves that purpose.

Meanwhile, Israeli officials are lowering expectations, however, explaining that the White House has refused to make any alterations to maps it has drafted and will accept only “cosmetic changes.”