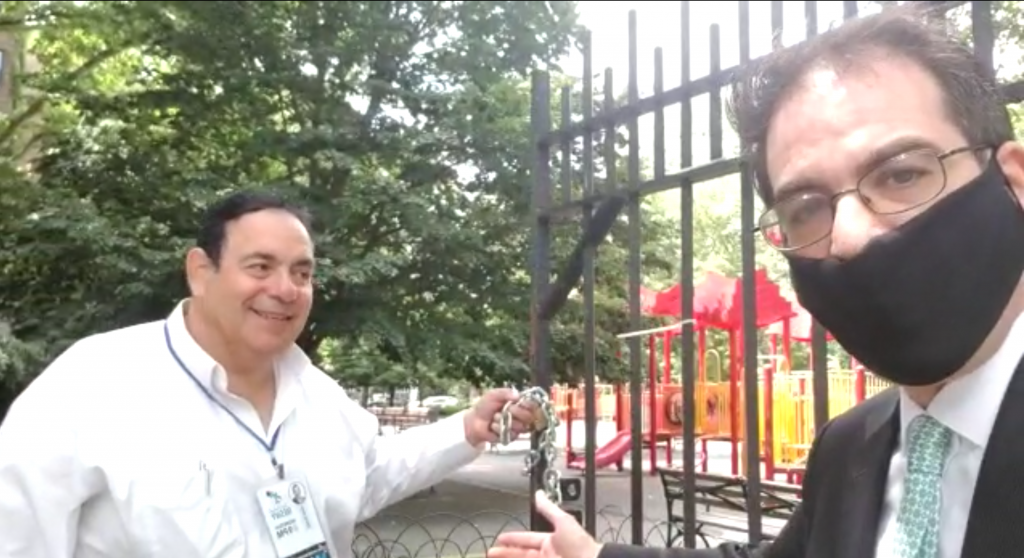 Brooklyn playgrounds continue to be opened by elected officials and community members opposed to the mayor’s policy that they remain shut even as New York has entered Phase 1 of the reopening following the coronavirus shutdown.

On Wednesday morning, City Councilman Kalman Yeger and radio personality Heshy Tischler, who has acquired the moniker ParkBuster due to his efforts at reopening playgrounds, opened the gates of DeGilio Playground on McDonald Avenue and Avenue F in Kensington. A poster had been taped to the gate reading “Kids Lives Matter” and “Open Up Our Camps.”

“All we are doing is for the sake of the children, who can’t vote and don’t have a voice,” Tischler told Hamodia. “I am their voice. The children of New York City, who have been shut in for nearly three months, have had enough, and need a place to play.”

Asked if there are risks to opening the playground during the pandemic, Tischler replied, “Sure. But the decision should be up to the parents.”

Yeger and Tischler went across the street to a section of the park that is just an open area used for running and biking, and found the gates locked, which Yeger called “absurd,” noting that officially, only playgrounds are be shut, while open spaces in parks may be used. Yeger and Tischler opened the locked gates, then returned to the playground – whereupon a Parks Department official said that due to Tischler and Yeger’s advocacy, and the Parks Department’s unwillingness to get into another dispute over the issue, the playground would be left open to the public.

Gov. Andrew Cuomo announced last week that each locality may decide when its playgrounds are permitted to open. Mayor Bill de Blasio said at his daily press conference Wednesday that New York’s playgrounds would reopen in Phase 2, which won’t begin before next week Monday at the earliest.

“We told the mayor our parks are opening, with or without his help,” said Yeger, noting that Cuomo had said Tuesday that it is “up to the local government” when playgrounds may reopen. “I join Senator Felder and Assemblyman Eichenstein in agreement with Governor Cuomo, and that’s why we decided to reopen our parks.”

Wednesday’s was just the latest in a series of forced reopenings of Brooklyn playgrounds.

Speaking outside Kolbert Playground on Tuesday morning, Eichenstein asked, “We have agreed that children can come together in a day camp setting and play with each other. Why can’t we open the playgrounds? Of course it needs to be done in a safe manner,” like regular cleaning of the grounds, Eichenstein said. “We’re doing it with the MTA every single night, why can’t we do it for our children?”

“Mr. Mayor, not everyone lives in a mansion on the Upper East Side with a huge lawn on one side of their mansion and an even bigger park on the other side,” Eichenstein continued, referencing Gracie Mansion, the mayor’s residence. “Let kids be kids.”

“You, Mr. Mayor, have called for thousands of people to come out to the streets and protest,” Eichenstein added. “Why can’t children come out and play safely in a playground?”

Eichenstein, who has close ties with de Blasio and served as a staffer in his administration before he ran for Assembly, has sharply criticized the mayor at times during the pandemic.

The movement to open shuttered playgrounds has come amidst anger over what critics deem a double standard, as law-enforcement officials have been expelling children and locking playgrounds just blocks from where large Black Lives Matter protests have been held with de Blasio’s support. The protests, which have been held nationwide and around the world, began at the end of May, when a black man in the custody of Minneapolis police died after an officer kneeled on his neck for over eight minutes.

De Blasio has allowed the protests to continue, even while enforcing other gathering bans during the pandemic due to what he deemed “very particular” circumstances stemming from “400 years of American racism.”

But elected officials and community leaders argue that as the pandemic has waned significantly, the playgrounds should be opened.

Parents and children entering the park expressed thanks to those who had forced it open. Drivers honked cars, shouting, “Open the park!”

Parks had already been forcibly opened in Boro Park and Williamsburg earlier this week.

In a conversation with Hamodia Tuesday at Kolbert Playground, as mothers pushed children on swings, and kids climbed the monkey bars and slid the slides, Felder had sharp words for the mayor, whom he has frequently criticized.

Asked what he thought of de Blasio’s overall handling of the pandemic, the senator replied, “I think he’s been very consistent in being an incompetent mayor. Probably the most incompetent mayor in recent history.”

“I dare say,” said Felder, “that he really never knew what he was doing. And that’s why the city has been in decline for a number of years. This pandemic is just a culmination of his administration’s incompetence over the years, taking away stop-and-frisk and other things that have been safety nets for the city.”

Felder called the elimination of the NYPD’s plainclothes anti-crime unit, announced Monday, “ridiculous,” saying of de Blasio, “It’s like every morning he figures out some other way to ruin the police department.”

After leaving Kolbert Park, the elected officials and Tischler went to Dome Playground on 38th Street and Dahill Road in Boro Park. Another man had brought equipment and cut through one of the locked gates.

Dozens of people proceeded to enjoy the playground facilities, young and old alike. Yeger and Eichenstein sat in swings, as Tischler “pushed” them, and Felder, the elder statesman of New York’s Orthodox political contingent, stood near the swing set, a smile apparent despite his facemask.

Later, several police officers, sent to the park via a 311 call, began questioning Tischler, who was walking around with the broken chain. Tischler, who had in fact had not cut the chain himself, declined to speak with the officer; he and Yeger suggesting that the officer call a superior. When the superior officer came, he told the other officers that all NYPD personnel would leave, and leave the matter to the Parks Department.

Told by this reporter that the Parks Department might come and shut the park, Eichenstein replied, “So we’ll open it again.”

Later in the evening, Tischler opened three shuttered parks in Crown Heights. Noting that he had not actually broken any city property, Tischler said, in a video to de Blasio, “Mr. Mayor … I just unscrewed the bolt. I didn’t damage it. You can come and pick up your stupid chain anytime you want.”