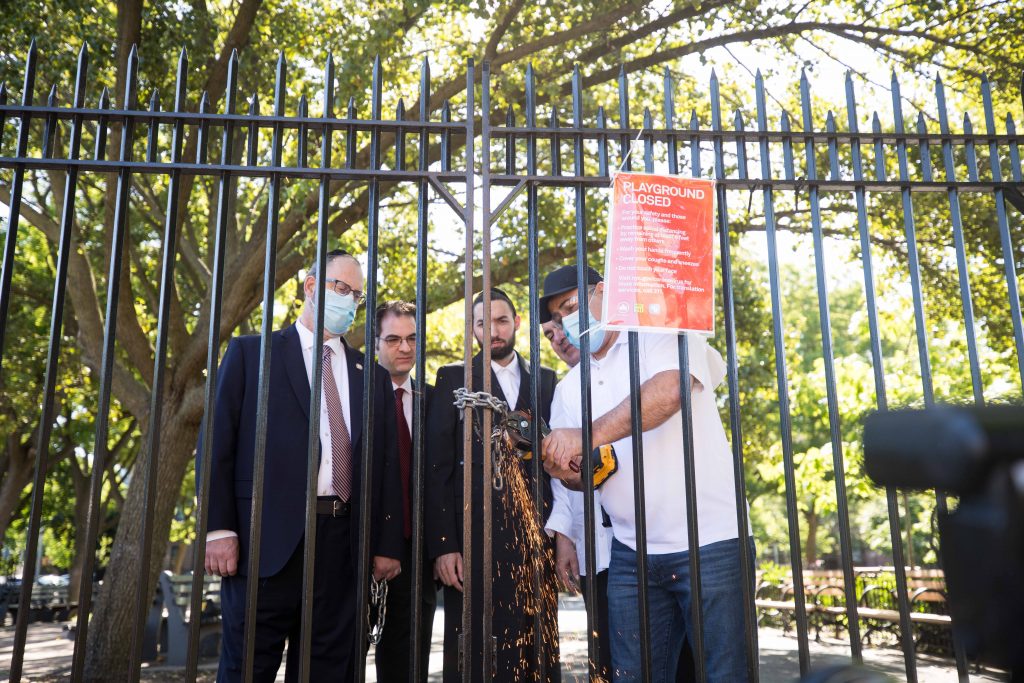 “Individually, each of us exhausted every avenue of diplomacy in our effort to open our playgrounds for the families and children in our city. We advocated sincerely and respectfully, hoping for a willing partner. On Sunday we stood here together, surrounded by children and families suffering under an inequitable, nonsensical policy, as they made a heartfelt plea. For the last time, we urged the Mayor to open these gates and clearly stated our intention to unlock them and rightfully return the parks to the children. The people have spoken and they are sick and tired of being ignored. With everything going on in the world, why is our Mayor intent on making criminals of mothers and children in need of a safe space to play? If they lock these gates, we will cut them open again tomorrow, because we serve the people. Who do you serve, Mr. Mayor?”

Yet despite the pleas of these elected officials with the backing of the parents and children of the communities, the mayor remained defiant in his refusal to open them.

“No, we’re not going to allow people to take the law into their own hands. It just doesn’t work. So people are not allowed to open up a playground this not yet available to the public,” he said.

The mayor said he is sympathetic about would not change his mind.

“I’ve said I think it’s going to take longer than that, just to make sure we’re absolutely certain. But until the order is given ‘the playgrounds are open,’ people need to stay off the playgrounds. It’s not appropriate to take their own action. We’re doing this so that we can get to Phase 2 and beyond. So I understand people’s frustrations. But if folks act prematurely, and that causes the disease to start spreading again, then that’s the kind of thing that will undermine our ability to get to Phase 2 and stay in Phase 2. So, I know it’s not easy but people have to understand there’s a reason for these rules – it’s to help us move forward.”

Playgrounds won’t officially reopen until Phase 2, which is currently on track for June 22, at earliest.

In response to the mayor’s refusal, on Tuesday morning the three representatives of these neighborhoods went to the local playgrounds, including Kolbert Playground on Avenue L and East 17th Street and Dome Playground on Dahill Road and 38th Street, and had the locks cut, opening them up for the children who have been anxiously awaiting the time they can re-enter and use the facilities. Assemblyman Eichenstein and Councilman Yeger made use of the swings, enjoying the fresh air of the parks along with other parents and children.

Councilman Yeger also decried what he alleged is the singling out of the playgrounds in the Jewish community to remain closed. “There has to be one standard for the entire city. It cannot be the case that parks are open in some neighborhoods and parks are locked in our neighborhoods and if it was truly, truly the case that for public safety and for public health parks had to be closed, then let all the parks be closed. And if it’s not the case, then let all the parks be opened, but enough is enough. The hypocrisy has to end,” Yeger said.

The group was also joined by radio personality Heshy Tischler, who has gone around Brooklyn in recent days opening shuttered gates, acquiring the moniker ParkBuster.

On Monday, neighborhood residents joined State Assemblyman Joe Lentol as they cut the locks of Middleton Playground in Williamsburg and opened the gates for the children to play.