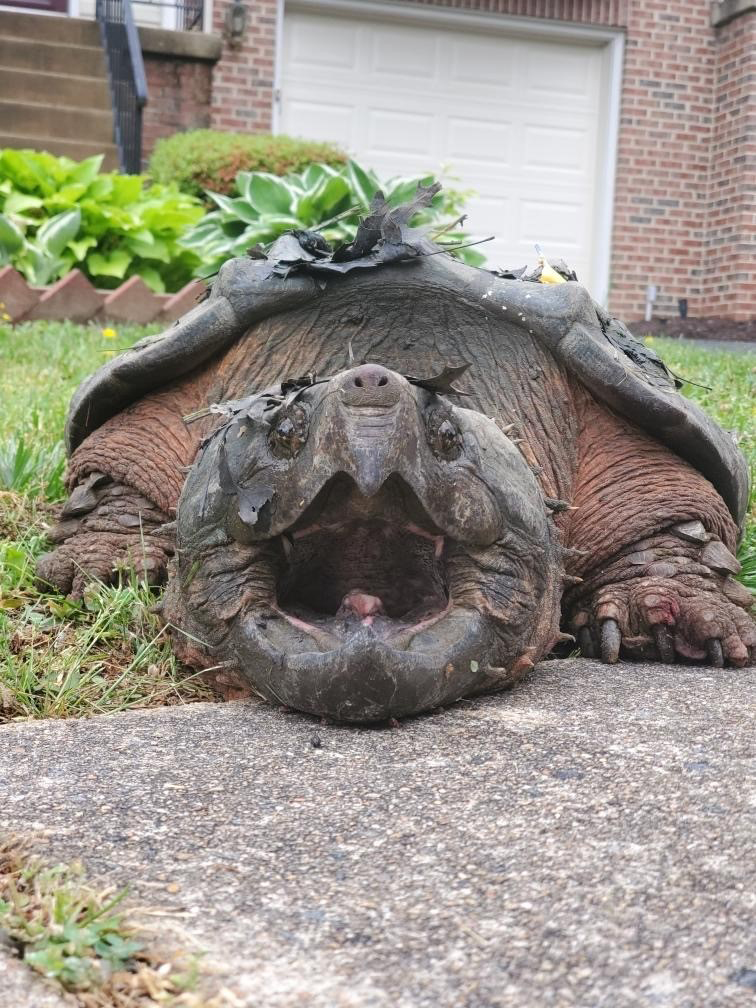 A 65-pound alligator snapping turtle found in a residential area of Fairfax County has a new home in a Virginia zoo.

Fairfax police said Monday in a Twitter post that their animal protection unit received a call May 28 about a “large turtle” and that “much to their surprise, it was a 65 lb alligator snapping turtle!”

The turtle was likely a pet dumped by its owner after it got too big, said J.D. Kleopfer, a herpetologist for the state of Virginia who helped to rescue the animal.

Kleopfer said the turtle, which rescuers named “Lord Fairfax,” has been seen twice in the past few months in the 5600 block of Belleau Woods Lane near Telegraph Road in the Alexandria section of Fairfax County.

Animal control officers with Fairfax County first called Kleopfer in March after they found the turtle in a backyard near a storm water retention pond in the residential neighborhood. But when he called officers the next day, they already had moved the turtle back to the pond.

A few weeks later, animal control officials called Kleopfer again to report the turtle was back out of the pond.

Kleopfer said the turtle probably was recently dumped nearby and “didn’t like the pond,” possibly because it was too small.

He said it’s rare to see a large alligator snapping turtle spend much time on land because it is “very aquatic,” adding that they prefer to be on the bottom of a river. He said the turtle’s name is borrowed from an alligator because of its powerful jaws.

“If you get your finger in there, it’s a good bet it’s coming off or broken,” he said.

Rescuers kept the turtle out of the water the second time and Kleopfer temporarily took it to his home in Williamsburg. He kept it in his backyard in a large plastic kennel for a week while he tried to find it a new home.

Kleopfer, who works for the Virginia Department of Game and Inland Fisheries, eventually got the Virginia Zoo in Norfolk to take in Lord Fairfax. He said the turtle is in quarantine and he expects it will be put on exhibit. Because the alligator snapping turtle was raised in captivity, it can’t be released into the wild.

Kleopfer said the turtle is an example of pet owners being irresponsible when it comes to having large pets.

“It likely outgrew the housing or the owner’s life changed and instead of finding it a proper home, they just dumped it,” Kleopfer said.

Alligator snapping turtles are typically found in the Gulf of Mexico and parts of the Florida panhandle, Georgia and Texas. Even snapping turtles that are native to the Washington area can be demanding pets, he said, and those who want to own one should do research beforehand.

“They’re cool and they’re cute when they’re hatchlings and small but they’re not an easy pet,” Kleopfer said. “They live a long time and have a specific diet and lighting needs. The novelty wears off. People get bored with them or kids stop taking care of them and then parents go and dump them in the neighborhood ponds.”

Kleopfer said someone was probably keeping Lord Fairfax as a pet and had it living in a large, rubber container, likely feeding it frozen mice and fish.

Alligator snapping turtles do not pose much of a threat to humans, according to wildlife experts.

Kleopfer said the alligator snapping turtle is North America’s largest freshwater turtle and can weigh as much as 200 pounds, although he noted Lord Fairfax was nowhere near that large.

Many can live at least 50 years, and some can live more than 100 years.

Lord Fairfax was lucky to be found, experts said. If it had not been discovered, it probably would have faced a slow death from cold or starvation.