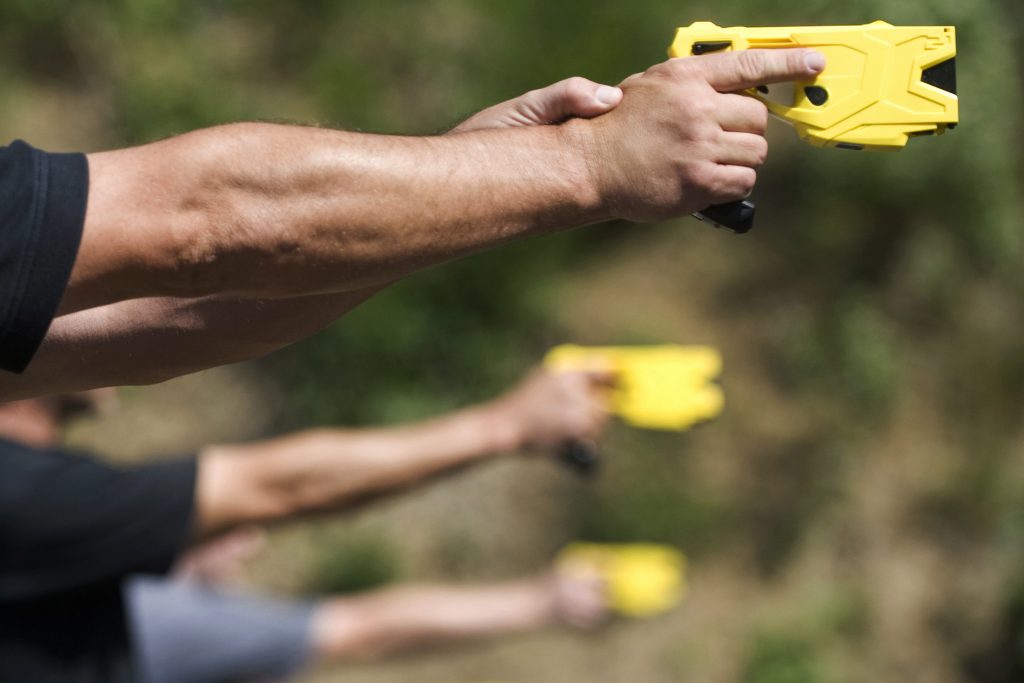 Less than a week after France banned police chokeholds, the government responded to growing officer discontent by announcing it would test stun guns for wider use, adding to the ranks of European law enforcement agencies that have recently adopted the weapons that many in the U.S. equate with excess police violence.

For Johny Louise, it felt as though the 22 seconds of Taser pulses that led to his son’s death counted for nothing.

“They need more death so that one day they understand, but it will be more pointless deaths and sufferings for families,” Louise said.

Gendarmes in Orléans responding to a drunken brawl tried to arrest his son, Loïc. One of the officers, Noham Cardoso, fired his Taser for the first time, hitting Loïc Louise in the chest with the twin darts and jolting him for a full 17 seconds, rather than the usual 5-second cycle, then hitting him again less than a minute later with another 5 seconds, according to court documents obtained by The Associated Press. Loïc Louis, who was black, passed out and was later pronounced dead at the hospital.

Cardoso was charged last year with involuntary homicide in the Nov. 3, 2013, death. He has said Loïc Louise was aggressive and appeared ready to attack.

The officer’s lawyer, Ludovic de Villèle, can’t fathom why France would replace an immobilization technique with a weapon. He said it would make more sense to invent another technique to replace the banned chokehold.

“It’s a bad sign to say, ‘You can’t strangle, but here are Tasers for you to use,'” de Villèle said.

But Tasers, or other stun guns, are increasingly the weapon of choice for European law enforcement as they have been for years in the United States. In Atlanta, just hours after the French announcement on Friday, a seemingly routine sobriety check outside a Wendy’s restaurant ended in gunshots after Rayshard Brooks grabbed a Taser from officers and ran.

The killing of the 27-year-old black man in an encounter with two white officers late Friday rekindled fiery protests in Atlanta and prompted the police chief’s resignation. One of the officers was fired.

Axon, the company that makes Tasers, has made a big push outside the United States in recent years and agencies in the Netherlands and Italy recently expanded use of stun guns, following the path of Britain, where use has increased steadily since they were introduced in 2003.

Stun guns are in limited but increasing use in France already. The number of discharges increased from 1,400 in 2017 to 2,349 in 2019. According to the French police oversight agency, stun guns killed one person last year and three suffered severe injuries. After France said it would abandon the chokehold last week, police across the country staged scattered protests, saying they felt abandoned by the government.

Police in England and Wales discharged Tasers 2,700 times over the 12 months ending in March 2019, according to government statistics, which also showed black people were more likely than white ones to have stun guns used on them.

Britain’s Independent Office for Police Conduct said last month that there were growing concerns “about its disproportionate use against black men and those with mental health issues.”

A British rapper posted video last week of his 62-year-old father being hit by a Taser in his London home during a police raid in April. The Metropolitan Police force said a review found no indication of misconduct, but London Mayor Sadiq Khan called for an urgent investigation.

According to Amnesty International, at least 18 people in Britain have died after a stun gun was discharged on them by police, but in many cases it was not determined that the weapon caused the death. The human rights group has said at least 500 people died after being hit by stun guns between 2001 and 2012 in the United States.

Italy’s government approved using Tasers in January after a two-year trial and opened a bidding process to purchase nearly 4,500 stun guns to be divided among various law enforcement agencies. Police chief Franco Gabrielli said in March that the next phase would involve a period of training and “operational experimentation” in a half-dozen cities.

“The security of our personnel is first, obviously without causing damage to the people who might find themselves on the other side,” Gabrielli said outside a Genoa hospital where he had gone to visit two police officers injured in a shootout.

The Netherlands began issuing stun guns to police in 2017 and is training 17,000 of the force’s 40,000 officers. But far fewer of the weapons are on order and they will not be part of an officer’s standard equipment.

There are about 15,000 stun guns in France, which has a total police and gendarme force of around 240,000. In the United States, by contrast, more than three-quarters of officers carry the weapons as standard issue, according to William Terrill, a professor of criminal justice at Arizona State University. Axon says it has standing relationships with 95% of American law enforcement agencies.

Terrill said training must come before widespread distribution of Tasers, which are sold as a way to protect officers from aggressive suspects while avoiding deadly force.

“It’s almost asking a police department to make an unfair choice in many respects,” he said. “By articulating it that way, it’s almost saying I value my officers’ safety more than the community’s safety.”

Chuck Wexler, executive director of the Police Executive Research Forum, based in Washington, D.C., said stun guns can be effective but also fail to subdue people as much as 45% of the time.

“We have seen circumstances where police officers get themselves in a situation where they use them, they don’t work and now they are very close to the person they are dealing with and they wind up having to use force, deadly force in some circumstances,” Wexler said.

Wexler said they can be foiled by distance, heavy clothing or only one of the weapon’s two prongs making contact.

For Loïc Louise’s family, from the French Indian Ocean island of Reunion, it was a weapon used far too easily on someone with dark skin.

His father does not believe all gendarmes are racist, but “some use their uniform to do whatever they please,” said Johny Louise. “And my son paid for it.”