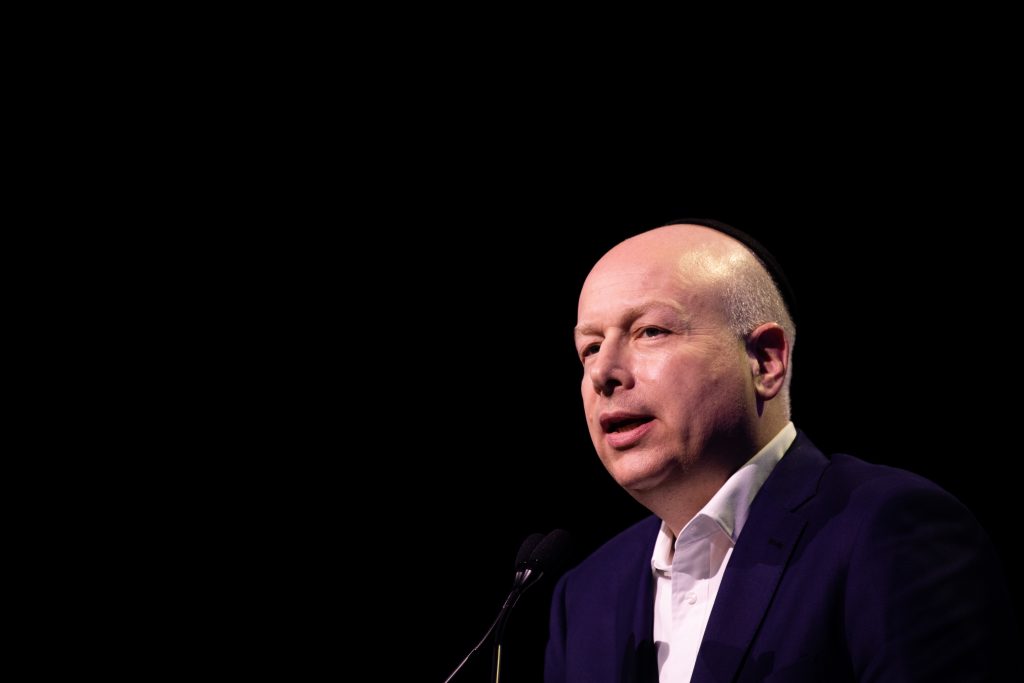 Former U.S. Mideast peace envoy Jason Greenblatt has written a response to the UAE’s ambassador to Washington, disputing the premises of his opposition to Israeli annexations in Yehudah and Shomron but welcoming the diplomat’s decision to write directly to Israelis.

In his op-ed in Sunday’s Jerusalem Post, Greenblatt rejected the United Arab Emirates’ Yousef al-Otaiba’s assertion that annexation would be “seizure of Palestinian land,” as he termed it in an article which appeared in the same paper last week. It was the first time a high-ranking Arab diplomat has penned an article addressed directly to Israelis in the Israeli media.

“It is not Palestinian land. It is land that is disputed, and the only way to resolve this is if the two sides can negotiate a settlement of the dispute directly together. But that has proven to be elusive. This is one of the main reasons we drafted the vision for peace in the manner that we did,” notes Greenblatt.

Addressing objections to the unilateral nature of Israeli plans for annexation, Greenblatt explained that “the leadership in Ramallah rejected the vision for peace before it was even published. Indeed, they rejected, again and again, plans and ideas put forward by prior U.S. administrations. Our view was that the leadership in Ramallah should no longer have a veto on what happens to this land and to the Israelis living there.

“But to protect the Palestinians, we gave them a lengthy period — four years — to get their house in order so that they, too, could obtain the many benefits contemplated by the vision for peace,” the official name of the Trump plan.

The former U.S. diplomat warmly praised the UAE for “dramatic changes in the past few years in relation to Israel and to the Jewish community. That is a result of the strong leadership and vision of His Royal Highness Mohammed bin Zayed. He is a pragmatic, open-minded, tolerant leader whose intentions are to unify and bring the region forward in a positive direction.”

Greenblatt recalled that “this past January, Otaiba, together with Omani Ambassador Hunaina al-Mughairy and Bahraini Ambassador Abdullah bin Rashid Al Khalifa, came to the White House to participate in the release of [President] Trump’s vision for peace. I have tremendous respect for that historic move. They applauded at many points and were warmly welcomed and applauded by those in attendance. They should still be warmly welcomed and applauded. They did not agree with all that was in the vision (likely far from it), and yet they came and supported us.”

Greenblatt, an observant Jew, closed on a personal note, which also reflected the change in relations between the UAE and the Jewish world:

“I still look forward to eating kosher food when I travel to the UAE. I hope that the UAE will still proceed to develop the Abrahamic Family House in Abu Dhabi, where a mosque, a church and a synagogue will be co-located in the same complex. I would be excited to pray there with my tefillin, in the same way that I prayed in a synagogue in Bahrain last year.”