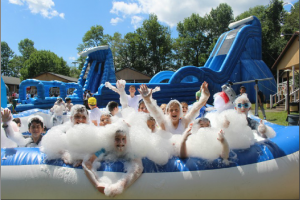 New York state has banned sleepaway camps for the 2020 season due to concerns over the spread of COVID-19, dealing a blow to the summer plans of thousands of children who have already been shut in for months.

As the pandemic has waned in New York, one of the world’s hotspots for the new coronavirus, Gov. Andrew Cuomo announced last week that day camps may open this summer, raising hopes that sleepaway camps may be included as well. On Sunday, Cuomo said he would “get an update early next week” from Health Commissioner Dr. Howard Zucker on the Kawasaki-like virus affecting some children that is believed to have been brought on by COVID-19, “and then we’ll make a decision.”

Orthodox Jewish legislators, camp owners, organizations, parents and children in New York – many of whom include large families living in small homes in cities, who count down the days to camp each year – lobbied for the opening of sleepaway camps. The camp owners argued that sleepaway camps make an ideal quarantine location: no one other than delivery personnel allowed in or out, and there would be no visiting day, no trips and constant testing for the coronavirus.

But in a news dump just minutes before 5 p.m. Friday, the administration released a statement from Zucker stating that sleepaway camps would be prohibited this summer season.

“Throughout this entire public health response, there isn’t a single decision we have not made based on data and science, rather than emotion,” Zucker said in the statement. “Using the best currently available science and data, I have reached a decision to prohibit overnight children’s camps from operating this season in New York State.”

“Unlike day camps, which are approved to open June 29, overnight camps are a difficult setting to manage social distancing and face covering and infection control practices. Overnight camps have congregate settings and sleeping arrangements in close quarters that present too many risks. In such a setting, even a single positive case in a camper or staff member could create an untenable quarantine situation and overwhelm camp health personnel that may not be able to handle a serious infectious outbreak of this nature.

“I have fond memories of summer sleepaway camp as a kid and I understand the role they play in childhood development and the disappointment this decision may bring to families across the state. But amid the worst public health crisis in a century, my number one priority is the health and safety of all New Yorkers. And while infection rates are declining, we need to proceed with caution and take every step possible to avoid undoing all the progress New Yorkers have made in bending the curve and reopening the state safely and responsibly.”

Assemblyman Simcha Eichenstein, a leader of the lobbying effort to allow camps to open, said in a statement Friday that he is “very disappointed and frustrated by the Governor’s decision.”

“Sleepaway camp represents a unique opportunity for young people to experience a fun filled summer in a wholesome outdoor environment,” said Eichenstein. “After three months of lockdown, I would even venture to call it an ‘essential service.’ After experiencing both the trauma and the boredom of lockdown, young people deserve to enjoy a fun-filled summer.”

Eichenstein said that banning sleepaway camps might have a devastating effect on children.

“We will not allow the Governor’s disastrous decision making to impact the wellbeing of our children,” said the assemblyman. “It is easy to hand out orders from the Governor’s Mansion, but if that is your decision, what is your solution Governor? What is your plan for the thousands of young adults who will be roaming the streets in boredom over the summer months? I refuse to accept a state of chaos and disarray over the next couple of months. I will continue to explore other options for our children so that they can enjoy the upcoming summer months, with safety as our number one priority, including sleepaway camp in other states who have already been approaching us.”

In anticipation of this ruling, a number of camps and yeshivos have already made plans to relocate to other states or open as day camps.

Shortly before the state announcement Friday, Camp Agudah announced it had reserved the grounds of Camp Winaukee, on Lake Winnepasaukee in New Hampshire, for its 7th-, 8th- and 9th-Grade campers. Head staff had visited the location on Thursday. It is expected that Camp Agudah’s regular location in Ferndale, N.Y., will operate as a day camp.

Earlier in the week, Camp Munk and Camp Ohr Chedvah announced they would operate as day camps; Camp Romimu said it would likely open as a day camp, as it had been unable to find a suitable location in another state. Yeshivas Novominsk announced it had booked the Bushkill Inn and Conference Center in the Poconos in Pennsylvania.

Jewish organizations that had lobbied for camp openings states their displeasure with the ruling.

The United Jewish Organizations of Williamsburg tweeted that it is “terribly pained that after camp directors, community orgs put in weeks & months to come up with plans how to operate camps safely, backed up by world renown doctors, its turned down. Families, children & community are devastated by today’s decision by @NYGovCuomo . #Reconsider.”

Agudath Israel of America in a statement expressed its “deep disappointment” in the decision.

“The news, released in a late Friday news dump in the form of a statement by State Health Commissioner Howard Zucker, will be a blow to the physical, socioemotional, and psychological well-being of children who have already endured forced quarantine for nearly three months, as well as their religious development,” Agudath Israel said. “Especially troubling about this development is the fact that it comes at a time when cases of COVID-19 in NY have plummeted for six consecutive weeks. Further, among the nearly 8 million COVID-19 cases worldwide there have been few cases, and even fewer serious cases, among children.”