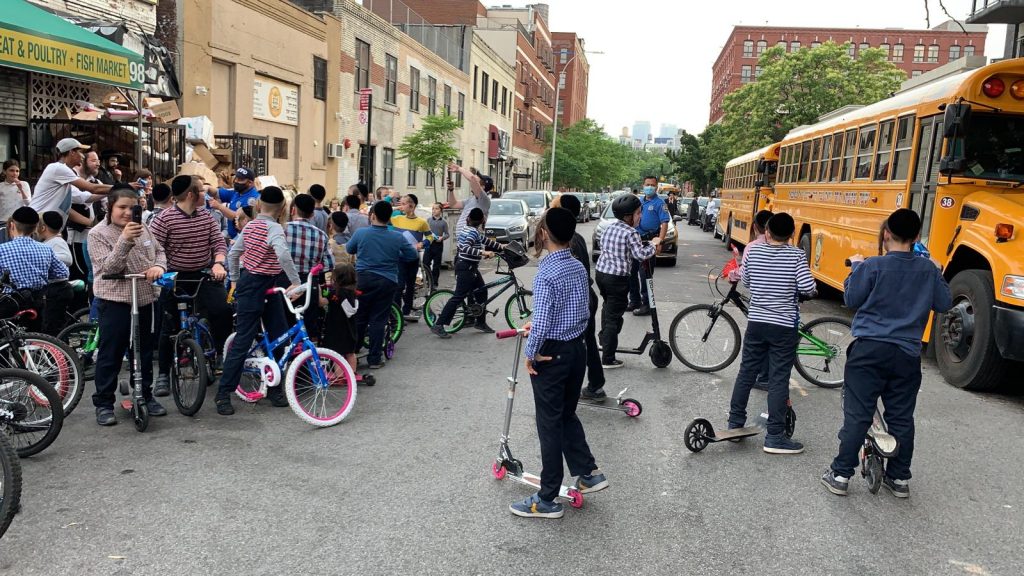 Their playgrounds were repeatedly closed and emptied by the local police department, yet the protests around the city continued unabated and uninterrupted by the officials. So the children of Williamsburg joined together to form a parade of bicycles and scooters and traversed through their streets, demanding equal rights as they declared, “Kids Lives Matter.”

Recently, Mayor Bill de Blasio was asked by a Hamodia reporter about the disparity between the forced closing of the playgrounds and the sanctioning of protests against police brutality and racism. After expressing his sympathy for the families cooped-up in their homes, he nevertheless stuck to his decision not to relax the restrictions and to insist that families continue with their social distancing, while at the same time supporting the massive demonstration going around elsewhere in the city.

Signs reading “Our Education Matters” and “We Want Camp” were on display as well, as the neighborhood demanded that Governor Cuomo allow sleep-away camps to open for this summer season which begins in a few weeks. A decision on the opening of camps is expected from the governor’s office this week.

The protest was peaceful as 200 children who participated devoured ices and refreshments provided by some bystanders, and stood shoulder to shoulder with the police officers from the Community Affairs Division. The demonstration was supervised by members of the Williamsburg community.