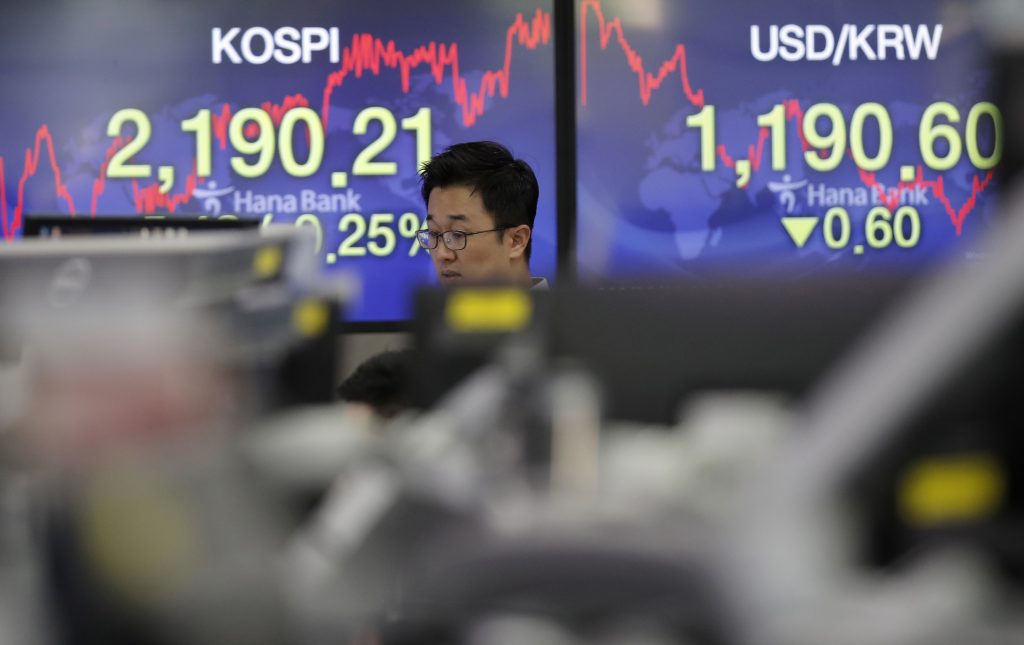 Stocks and bond yields are down sharply on Wall Street as optimism that the re-opening of businesses would drive a relatively quick economic recovery fades amid rising coronavirus cases in many U.S. states and countries.

The S&P 500 was down 3.9% in midday trading Thursday, extending its losses into a third straight day. The benchmark index is now on track for its first weekly drop in four weeks.

Nearly all of the companies in the S&P 500 were down. Technology, financial, industrial and health-care stocks accounted for much of the market’s broad slide. Energy stocks were the biggest losers as crude oil prices fell sharply. Bond yields fell and the price of gold surged as worried investors shifted money into the traditional safe-haven assets.

MGM Resorts International and PVH, owner of the Calvin Klein and Tommy Hilfiger brands, were among the biggest decliners. Each was down more than 12%.

European and Asian markets also fell. The global markets sell-off came a day after the Federal Reserve warned that the road to recovery from the worst downturn in decades would be long.

The sell-off this week marks a reversal for the market, which rallied 44.5% between late March and Monday, a scorching rate that many skeptics said was unsustainable and didn’t reflect the dire condition of the economy. Only a day ago the Nasdaq closed above the 10,000-point mark for the first time.

Emergency rescue efforts by the Fed and Congress helped arrest the market’s staggering 34% skid in February and March. Since then, the market had been riding a wave of investor optimism that the economy will bounce back by the end of the year, if not sooner, as businesses re-open and people go back to work. But confidence in that scenario is waning as infections and fatalities continue to climb in the U.S. and elsewhere.

In the U.S., Texas and Florida were among the states reporting jumps in the number of coronavirus cases after precautions were relaxed last month. The total number of U.S. cases has now surpassed 2 million.

The Labor Department said Thursday that about 1.5 million people applied for U.S. unemployment benefits last week, another sign that many Americans are still losing their jobs even as the economy begins to gradually re-open. The latest figure marked the 10th straight weekly decline in applications for jobless aid since they peaked in mid-March when the coronavirus hit hard. Still, the pace of layoffs remains historically high.

Other jobs data have been more encouraging. A report on Friday showed that the U.S. job market surprisingly strengthened last month as employers added 2.5 million workers to their payrolls. Economists had been expecting them instead to slash another 8 million jobs.

That report helped stoke optimism among investors that the economy can climb out of its current hole faster than forecast. But the Fed estimated Wednesday that the economy will shrink 6.5% this year, in line with other forecasts, before expanding 5% in 2021. It also expects the unemployment rate at 9.3%, near the peak of the last recession, by the end of this year. The rate is now 13.3%.

The central bank said it would keep providing support to the economy by buying bonds to maintain low borrowing rates and forecast no rate hike through 2022, which could make it easier for consumers and businesses to borrow and spend enough to sustain an economy depressed by business shutdowns and high unemployment.