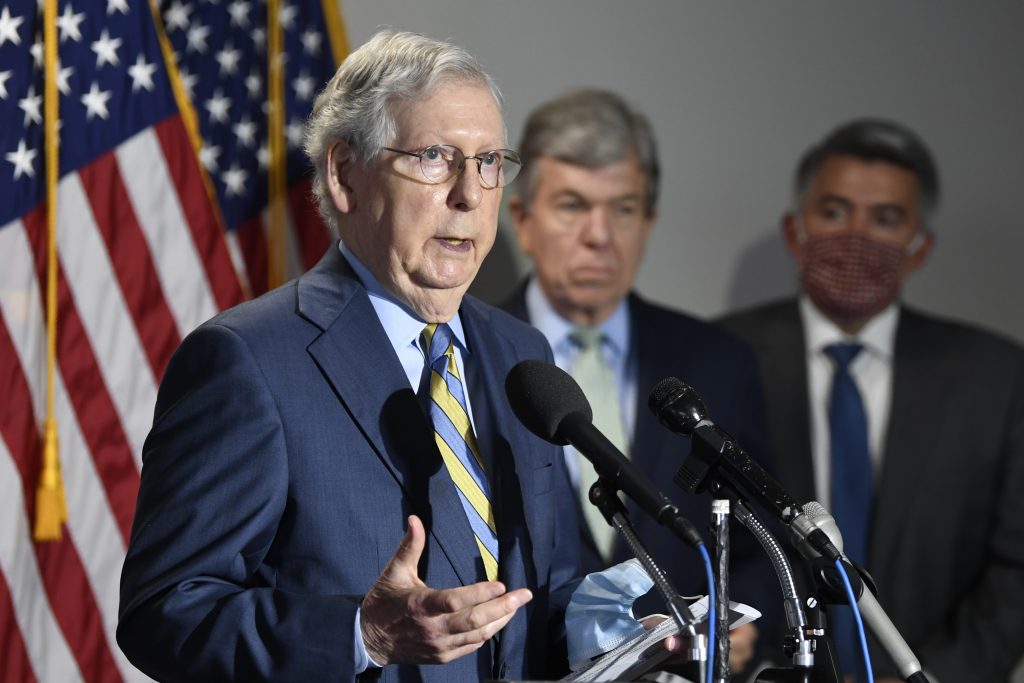 Senate Republicans are narrowing on a package of proposed policing changes after George Floyd’s death that would create a national database of use-of-force incidents, boost the use of police body cameras and include long-stalled effort to make lynching a federal hate crime.

The emerging bill doesn’t go as far as a sweeping Democratic package unveiled this week. But the sudden burst of political energy reflects how quickly the national conversation over police and racial injustice is upturning business as usual in Washington. The GOP package includes several provisions similar to the Democratic bill.

“The killing of black Americans like George Floyd and Breonna Taylor have accelerated important conversations,” McConnell said as he opened the Senate.

The party that has long favored a “law and order” approach — seen in President Donald Trump’s reaction to the nationwide demonstrations over Floyd’s death — finds itself trying to adapt to a fast-changing national dialogue on police and race as the Black Lives Matter movement gains worldwide prominence.

“This is an issue whose time has come,” said Sen. Tim Scott, R-S.C., the GOP’s only black senator, Thursday on a talk show.

A working group of GOP senators led by Scott is meeting behind closed doors and with the White House on the legislation. Despite a push to produce a package this week, the deadline is slipping as details are being compiled. It is expected to be released early next week, according to a senior GOP aide unauthorized to discuss the situation and granted anonymity.

Central to the package will be a new national database of use-of-force incidents, similar to one included in the Democratic bill. It’s a concept both parties support as a way to track potential police misconduct and ensure officers cannot simply transfer from one department to another without public disclosure of their records.

Scott said the provision would be named the “Breonna Taylor Reporting Act” and it would include not only the tracking of use-of-force incidents but also no-knock warrants as police used to enter the 26-year-old woman’s home. The database proposal expands on a similar bill Scott introduced in 2015 after Walter Scott — no relation — was killed by police in South Carolina.

Unlike the House Democratic bill, which would ban police choke holds, the Republican bill appears to be more focused on providing training for officers to de-escalate confrontations.

It would also include “duty to intervene” provisions so other officers would step up to stop misconduct, Scott said.

“We’re trying to provide the resources necessary to retrain these local departments,” he said.

One area of uncertainty is over so-called “qualified immunity” which the Democrats’ bill adjusts to make it easier for injured individuals to claim damages in civil suits against police offices. The White House has said it was a nonstarter and is not likely to be included in the Senate bill.

Agreement, though, is quickly forming around the anti-lynching bill, a long-stalled effort that has previously been approved by both the House and Senate but was being held last week up by objections from a lone Republican, Sen. Rand Paul of Kentucky.

Paul has pushed instead for other measures including changes to no-knock warrants and an end to the practice of sending surplus military equipment to local police departments. Both those are included in the Democrats’ bill, but not likely to be included in the Senate GOP package.

Democrats have so far panned the GOP effort as insufficient compared to their own far-reaching proposal, built from decades of work by the Congressional Black Caucus tracking police and racial issues. The House is expected to approve the Democrats’ bill mid-June.

“The moment does not call for cherry-picking one or two things to do. It calls for bold and broad-scale change,” said Senate Democratic leader Chuck Schumer of New York.

Schumer has compared this moment in the aftermath of Floyd’s death to the GOP approach to gun violence legislation after mass shootings, when lawmakers try to find consensus but end up doing nothing.

“We cannot go through those same motions again,” he said. “This is about the [old] sin of America, that we must try to deal with head-on.”

In the House, the GOP leader Kevin McCarthy of California signaled a willingness to engage on the issue.

“I think there’s a lot of concepts that we agree upon,” McCarthy told reporters.

McCarthy said he favored a ban on choke holds.

It was a changed tone for Republicans who spent the past several days criticizing activists’ calls to defund the police — an overarching term to describe the range of options, from dismantling departments to shifting resources to other mental health and other community services. The Democratic bill does not include efforts to defund the police. It provides grant money to departments that want to consider new ways of policing.

The White House has dispatched top aides to work with Senate Republicans and Trump’s views on any final deal will remain key to its support.

McConnell said the Senate is “preparing to add to the conversations surrounding law enforcement with our own serious proposal. The policies would “take smart steps without attacking the vast majority of police officers who bravely do their jobs the right way,” he said.