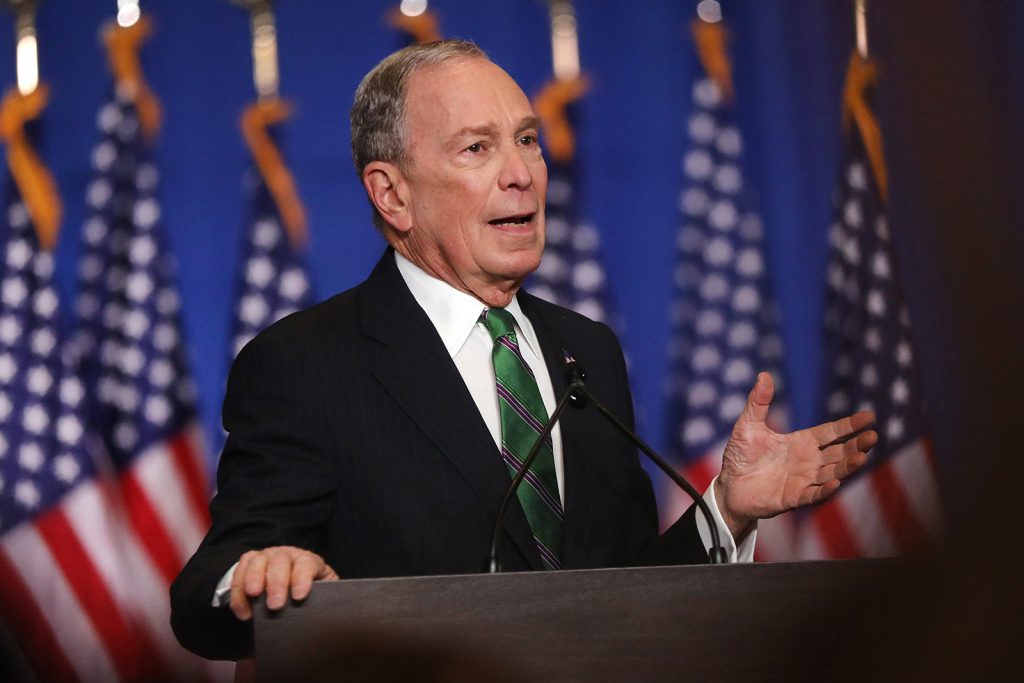 It took Michael R. Bloomberg just over 100 days to spend $1 billion on a Democratic presidential campaign that yielded little more than a token victory in American Samoa.

Three months after his campaign’s collapse, the former New York mayor is now playing a lower-profile — but still crucial — role in the party’s drive to oust President Donald Trump in November.

Bloomberg, the party’s top donor for the 2020 elections, plans to spend heavily this summer and fall on anti-Trump advertising in presidential battleground states to support Joe Biden’s candidacy, according to a senior adviser. He also expects to pour large sums into helping Speaker Nancy Pelosi maintain Democrats’ majority in the House.

At the same time, a tech startup that Bloomberg founded last year is trying to get hired by Biden’s campaign and the party to gather and analyze data to target appeals to potential Democratic voters. But the New York firm, Hawkfish, has drawn staunch opposition from progressives and party technology experts.

Bloomberg paid Hawkfish $69 million for work on his run for president, but its only other experience was on relatively small campaigns in Kentucky and Virginia.

Hawkfish’s secretive culture — it has no public website — and its failure to help Bloomberg win any states in the primaries have fueled suspicions on the left that it can’t be relied upon to join Biden’s effort to match or surpass the Trump campaign’s well-funded digital operations.

Rep. Alexandria Ocasio-Cortez of New York, a leader of the party’s progressive wing, has urged Biden and the Democratic National Committee to reject Hawkfish. She tweeted in April that it was a bad idea to hand over the party’s highly valuable voter data to “a shady firm w/ a failed track record.” She did not explain why she called Hawkfish shady and did not respond to a request for comment.

Bloomberg’s shifts in party loyalty — he switched from Democrat to Republican in 2001, became an independent in 2007 and registered again as a Democrat in 2018 — have heightened some progressives’ wariness.

“Democrats are rightly suspicious of former Republican billionaires parachuting into the Democratic process acting as white knights,” said Stefan Smith, who was the online engagement director for Democrat Pete Buttigieg’s presidential primary campaign. “Every cycle there is a Silicon Valley solution to campaign problems that are rarely built by people who know what they are talking about.”

Spokesmen for both the Biden campaign and the Democratic National Committee declined to discuss Hawkfish or potential competitors for the work it is seeking.

Bloomberg is investing another $35 million in Hawkfish to help Democrats in November, but does not expect the company to make a profit anytime soon, according to a company spokeswoman.

The company’s proposal puts Biden and the party in an inherently awkward position: Rejection could offend a donor who transferred $18 million from his presidential campaign to the DNC after he dropped out of the race in March.

Hawkfish Chairman Gary Briggs, a former Google and Facebook executive, said the company was not trying to take control of the party’s digital infrastructure.

“Our goal is to help Democrats win,” he said. “We’re not seeking to do anything other than that.”

Bloomberg, 78, spent more than $100 million on Democratic campaigns in 2018, including those of 21 candidates who won House seats formerly held by Republicans. His anti-gun group, Every Town for Gun Safety, was instrumental in helping Democrats win control of Virginia’s Legislature last year for the first time in a generation.

The Biden team’s recent hiring of top digital staff from the campaigns of Sens. Elizabeth Warren of Massachusetts and Kamala Harris of California has eased concerns that Bloomberg would gain too much control over the party’s data if Hawkfish is retained.

But some Democrats still worry. Much of Bloomberg’s digital campaign was standard fare, just on a larger scale than opponents could afford. His inability to recreate the online organizing that propelled the durable volunteer networks behind candidates like Buttigieg and Vermont Sen. Bernie Sanders was a major weak spot.

Where Bloomberg did innovate was in adapting Madison Avenue ad tactics to presidential primaries. His digital team showered social media influencers and meme-makers with cash in return for posts that brought attention to Bloomberg. Reception was mixed, but some digital pioneers in the party are pushing for Biden to embrace them.

Still, if Hawkfish is hired, it could expand Bloomberg’s influence over the party. Presidential campaigns drive parties’ online innovation. Future candidates seeking an edge in races up and down the ticket will be looking to use tools developed under Biden, along with the data files built out on tens of millions of voters.

Those data files are some of the most valuable currency in politics. On the Republican side, the network of advocacy groups backed by billionaire activists Charles Koch and his late brother David consolidated its power in the party in the pre-Trump era by contracting with down-ballot candidates to build voter data files for their campaigns.

The data collected by the Koch network opened a rift within the party after Trump won the 2016 presidential nomination and the Koch group did not back him. By 2018, the Republican National Committee under Trump was imploring donors and candidates not to work with the Koch network, complaining it had weaponized its influence over voter data, leaving vulnerable candidates who did not adopt the Kochs’ agenda.

Smith, who worked for Buttigieg, said Trump’s campaign has shown “just how powerful big data is in American politics. Whoever has the data is going to be able to dictate the terms for the next few election cycles … . I cannot imagine putting a billionaire between the Democratic Party and the voters will work out well for us.”