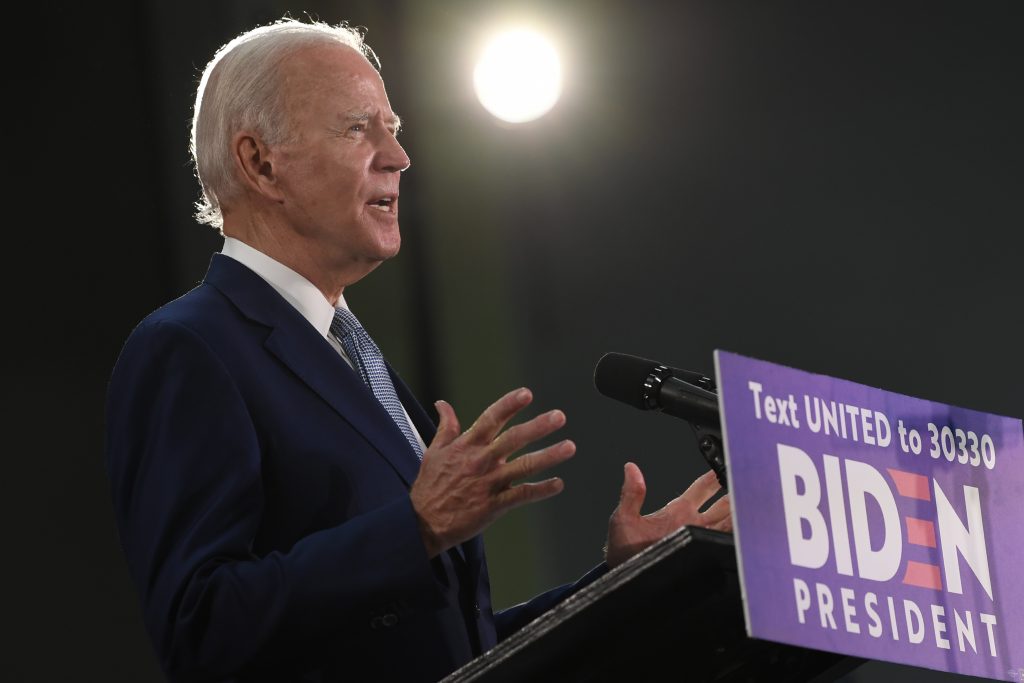 Joe Biden on Thursday released a plan that he says can jump-start an economy in free fall from the coronavirus pandemic and said he is better positioned than President Donald Trump to safeguard businesses and their employees and create jobs without taking unnecessary health risks.

Trump’s Democratic challenger is promising to guarantee testing for the virus and protective equipment for people called back to work, use federal money to ensure paid leave for anyone who becomes sick and oversee thousands of new hires to help track the spread of illness.

“Trump has basically had a one-point plan: open businesses,” Biden said at an event in Philadelphia with business owners and Rep. Dwight Evans, D-Pa. “It does nothing to keep workers safe, to keep businesses able to stay open, and secondly it does very little to increase consumer confidence.”

After remaining home for months during a campaign frozen by the virus, Biden has begun holding public events within driving distance of his house in Delaware. Unlike Trump, he has yet to schedule rallies. His campaign says it plans to do so when public health officials say it’s safe.

Biden’s plan would seek to protect from discrimination older people, those with disabilities and others at high risk of infection from the coronavirus. He envisions a “safer shoppers” program intended to make consumers feel more secure. It would provide state and local officials with money to certify when businesses are complying with testing rules and conducting “spot checks as necessary” to prevent the spread of the coronavrius.

Biden announced the plan a day after saying that his chief worry is that Trump will attempt to “steal” the November election, and the Democratic challenger says he’s even considered the possibility that the Republican incumbent would refuse to leave the White House should he lose.

“My single greatest concern: This president’s going to try and steal this election,” Biden said on a talk show which aired Wednesday night. “This is a guy who said all mail-in ballots are fraudulent, voting by mail, while he sits behind the desk in the Oval Office and writes his mail-in ballot to vote in the primary.”

Biden was asked whether he’s considered what would happen if Trump refused to vacate the presidency in the event he wasn’t reelected. “I have,” Biden said, before suggesting that the military could step in to ensure a peaceful transition of power.

“I am absolutely convinced they will escort him from the White House with great dispatch,” the former vice president said.

“This president’s looking forward to November,” McEnany told Fox News , “This president’s hard at work for the American people. And leave it to Democrats to go out there and grandstand and level these conspiracy theories.”

Biden’s comments come as Trump has intensified his claim that absentee voting, which many states are expanding to avoid large crowds at polling places during the coronavirus pandemic, increases the possibility of fraud. There is little evidence to support that assertion; Trump himself has voted by mail in the past.

A chaotic Tuesday primary in Georgia, where there were problems with voting machines and long lines, may foreshadow a messy November election.

Trump on Thursday planned to resume in-person fundraising events after a three-month hiatus as his campaign tries to maintain a steep cash advantage over Biden. The president has scheduled a campaign rally in Oklahoma next week.

Biden has previously suggested that Trump’s opposition to mail-in ballots could upend the presidential election. “This president, mark my words, I think he’s going to try to kick back the election somehow, come up with a rationale why it can’t be held,” he said during an April fundraiser.

“He’s already trying to undermine the election with false claims of voter fraud and threatening to block essential COVID assistance if any extra funds go to the U.S. Postal Service,” Biden said at the time. “What in G-d’s name was that about other than trying to let the word out that he’s going to do all that he can to make it very hard for people to vote.”

During the interview, Biden also said that more than 20 states had passed 80-plus pieces of legislation “making it harder for people vote.” He said his campaign was assembling a team of lawyers to observe balloting in “every district in the country.”