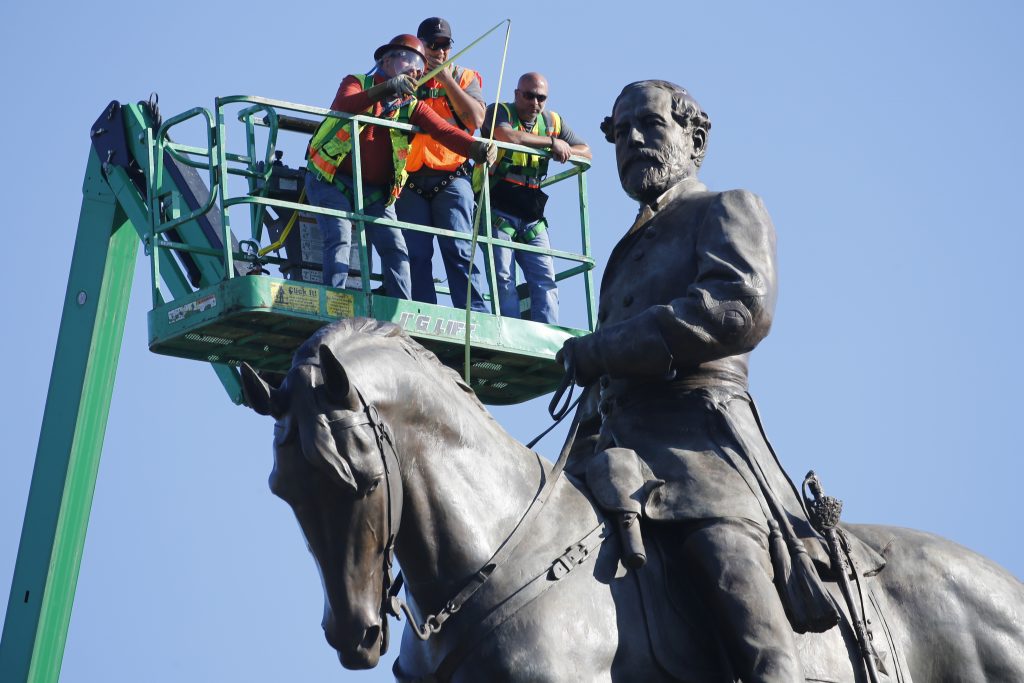 State Attorney General Mark Herring, D, has served notice to a Circuit Court judge that he will defend the effort to remove Richmond’s grand statue of Robert E. Lee and complained that a temporary injunction against the removal was issued without informing his office.

“The Governor has both the authority and the moral obligation to remove this badge of white supremacy from its place of exaltation, and [Herring] intends to defend the Governor’s decision and ensure the removal of this divisive relic,” the attorney general’s office wrote in a court filing Wednesday afternoon.

Gov. Ralph Northam, D, said last week that he was taking down the statue from state property on Richmond’s Monument Avenue, partly in response to daily demonstrations against police mistreatment of African Americans.

On Monday, after state workers had begun surveying the statue for removal, Richmond Circuit Judge Bradley Cavedo granted a temporary injunction sought by William Gregory, who contends in a lawsuit that the state promised to “affectionately protect” the statue when it annexed the land it stands on from Henrico County. The suit identifies Gregory as a great-grandson of a couple who were signatories to the deed.

State lawyers said they were not informed of the hearing on the injunction, which halts any effort to remove the statue for 10 days. While a notice was not required, Herring’s office said it is almost always given a heads up in such circumstances.

“Defendants were not even aware of this suit until after an ex parte order had been issued, and Plaintiffs did not provide formal notice of the complaint and temporary injunction order until . . . both had been released to the media,” Deputy Attorney General Samuel Towell wrote in Wednesday’s filing on behalf of Herring and other lawyers in the office.

The filing points out that the court issuing the injunction is only two blocks from the attorney general’s office. Gregory’s attorneys have declined to comment on the case or the way it was handled.

Towell asked for a transcript and any filings from the Monday hearing at which the judge granted the temporary injunction.

Northam vowed Tuesday to fight the injunction and the underlying lawsuit all the way to the state Supreme Court if necessary.

The statue is on state property that was annexed from Henrico in 1890. In the deed recording the land transfer, the state “guaranteed” to “hold said statue and pedestal and circle of ground perpetually sacred to the monumental purpose” and to “faithfully guard it and affectionately protect it,” Gregory’s lawyer, Joseph Blackburn Jr., argued in a court filing Monday.

“His family has taken pride for 130 years in this statue resting upon land belonging to his family and transferred to the Commonwealth in consideration of the Commonwealth contractually guaranteeing to perpetually care for and protect the Lee Monument,” the suit states.

But Herring and his lawyers argued Wednesday that “the statue is a daily reminder of one of the darkest periods in our Commonwealth’s and Nation’s history. The statue does not seek to explain or seek reconciliation for that time: it seeks to glorify it. It is a piece of state property freighted with exclusionary meaning to broad swaths of Virginians.”