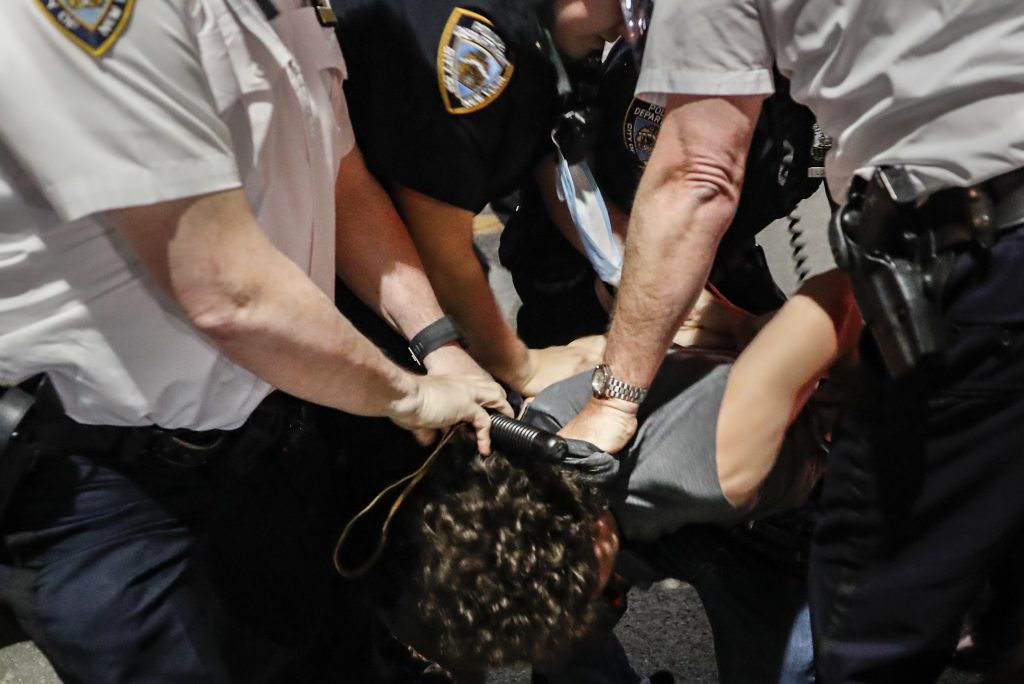 The measure to make officers’ records and misconduct complaints public is among several police accountability bills racing through the state legislature. Lawmakers passed other bills that would provide all state troopers with body cameras and ensure that police officers provide medical and mental health attention to people in custody.

Many of those bills were first proposed years ago, but got new momentum after huge protests nationwide condemned police brutality.

The passage came as criminal charges were brought Tuesday against an NYPD officer over his rough treatment of a protester during demonstrations following the death of Floyd.

Eliminating the law, known as Section 50-a, would make complaints against officers, as well as transcripts and final dispositions of disciplinary proceedings, public for the first time in decades.

Gov. Andrew Cuomo, who has recently supported reforming the law, has said in the wake of the protests that he will sign the repeal. Only Delaware has a similar law.

Momentum for ending the secrecy law reached a crescendo in recent days as marchers filled streets in Brooklyn, Manhattan and elsewhere to rally against police abuses — amplifying the calls of reform advocates who spent years pushing for change in the wake of other high-profile police killings, including that of Eric Garner in 2014.

“This is no time for rejoicing,” said State Senator Kevin Parker, a Democrat representing parts of Brooklyn. “This bill has been around for over a decade … And the only reason we’re bringing it to the floor now is because the nation is burning.”

Several family members of New Yorkers killed by police officers gathered at New York City Hall Tuesday to call for the defunding of police and repealing 50-a, which state courts have cited in decisions to withhold officers’ personnel records.

“We are tearing down the wall of secrecy that has been shielding officers across the state,” said Constance Malcolm, mother of the late Ramarley Graham, who was unarmed when he was shot to death by a white NYPD officer in the bathroom of his apartment in 2012.

The state Senate and Assembly passed the 50-a repeal largely along party lines, as Republicans argued the law would allow the release of unsubstantiated or false complaints against officers.

But one of the bill’s sponsors, Sen. Jamaal Bailey, a Bronx Democrat, said the public has a right to view complaints: “Sometimes unsubstantiated complaints happen because people don’t want to follow up.”

The legislature on Monday passed other police accountability measures, banning police from using chokeholds, guaranteeing the right to record police activity and making it easier to file lawsuits against people making race-based 911 calls.

As lawmakers acted on accountability legislation, NYPD Officer Vincent D’Andraia was being arraigned on assault and other charges days after a bystander recorded him pushing protester Dounya Zayer, causing her to hit her head on the pavement.

D’Andraia was released after his lawyer entered a not guilty plea on his behalf. The officer was ordered to stay away from Zayer who was hospitalized after the May 29 altercation with what she said were a concussion and a seizure.

“Dounya was assaulted for the very reason she was protesting, and that’s police brutality,” said Zayer’s attorney, Tahanie Aboushi, adding that D’Andraia’s supervisor should face punishment beyond an announced reassignment.

“If not for this being on video it would have been business as usual for the NYPD,” Aboushi said.

In a statement announcing the charges, Brooklyn District Attorney Eric Gonzalez said he was “deeply troubled by this unnecessary assault.” Zayer, 20, called D’Andraia a coward and suggested the assault would only deepen mistrust of law enforcement.

“I was protesting for a reason,” Zayer said in a video tweeted from her hospital bed. The officer, she added, “should have had the self-restraint to not hurt the people he’s supposed to be protecting.”

The police department suspended D’Andraia, 28, last week without pay. His lawyer, Stephen Worth, didn’t immediately respond to a request for comment. If convicted, he could face a year behind bars, but first-time offenders rarely see any jail time.

D’Andraia is the first New York City police officer to face criminal charges over alleged misconduct exhibited during days of unrest that roiled the city in the wake of Floyd’s death in Minneapolis. Two Buffalo officers were charged with assault last week after they were seen on video shoving a 75-year-old protester to the ground.

D’Andraia’s union said de Blasio and police leaders were “sacrificing cops to save their own skin” by sending officers out to protests with “no support and no clear plan.”

“They should be the ones facing this mob-rule justice,” Police Benevolent Association president Pat Lynch said. “We will say it again: New York City police officers have been abandoned by our leadership. We are utterly alone in our efforts to protect our city.”