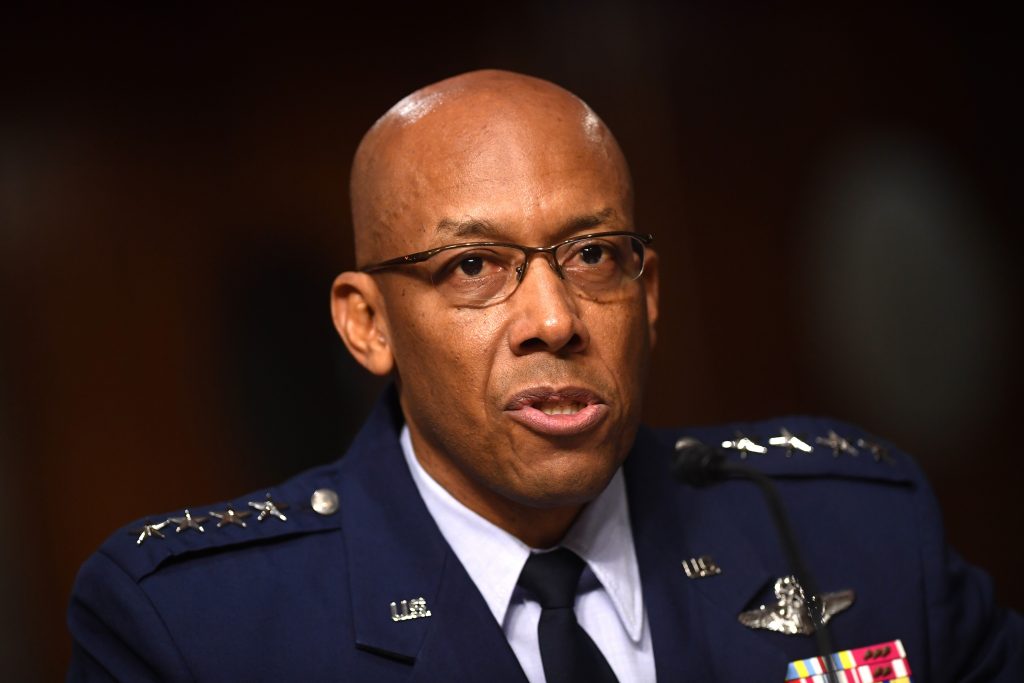 The Senate on Tuesday confirmed on Tuesday the first African American to be chief of a U.S. military service, as America and its military both wrestle with painful questions about racial justice.

The vote to make Gen. Charles Brown, commander of Pacific Air Forces, the 22nd Air Force chief of staff was 98-0, with Vice President Mike Pence making a rare appearance to preside over the Senate at the historic moment.

While 43% of the active-duty military are people of color, Brown is one of only two African Americans among the 41 four-star general officers, The New York Times reported last month.

The committees in Congress that oversee the armed services are likewise overwhelmingly white. Rep. Anthony Brown, D-Md., is the only black lawmaker on the Armed Services panels in either the House or Senate. And there are no African Americans on either chamber’s defense appropriations panels.

“Our military brings together brave men and women from across this nation to serve, and those leading our service members should reflect the power of this diversity,” Anthony Brown told CQ Roll Call in a statement. “While minorities are overrepresented in our enlisted personnel, those same groups are severely underrepresented in our officer corps, and even more so among our flag officers. The historic nature of the first African American service chief should not go overlooked. This is a positive step forward for our military and country.”

The only African American military officer to have served previously on the Joint Chiefs of Staff was Colin Powell, who was Joint Chiefs chairman during the administration of George H.W. Bush. But Powell was commander of Army Forces Command prior to being tapped as chairman and never led one of the armed services.

Brown’s confirmation comes during a period of racial turmoil in the United States — and within its military.

Brown himself released a video on June 5 to reveal his personal story of being black in the U.S. armed forces. The video was released just as protests were growing in U.S. cities over the death of George Floyd at the hands of Minneapolis police.

“I’m thinking about protests in ‘my country ’tis of thee, sweet land of liberty,’ the equality expressed in our Declaration of Independence and the Constitution that I’ve sworn my adult life to defend,” Brown said on the video, his voice cracking with emotion. “I’m thinking about a history of racial issues and my own experiences that didn’t always sing of liberty and equality.”

Three days before Brown released his video, Chief Master Sergeant Kaleth Wright, the Air Force’s top enlisted airman, who is also an African American, published a Twitter thread with his own emotional take on recent events.

“Who am I?” Wright tweeted. “I am a Black man who happens to be the Chief Master Sergeant of the Air Force. I am George Floyd…I am Philando Castile, I am Michael Brown, I am Alton Sterling, I am Tamir Rice,” a reference to African Americans who were killed by police.

“Sometimes it’s explicit, sometimes it’s subtle, but we are not immune to the spectrum of racial prejudice, systemic discrimination and unconscious bias,” Goldfein wrote.

Other military leaders, including members of the Joint Chiefs of Staff, have issued similar statements in the last week expressing a renewed commitment to righting long standing racial wrongs.

In the Air Force, the inspector general plans to review racial inequities in the service’s military justice system and in opportunities for advancement.

A series of recent reviews found that young African American airmen are disproportionately punished by commanders and courts-martial.

Protect Our Defenders, an advocacy group for military service personnel, produced a study in 2017 showing that young black enlisted airmen, in particular, were twice as likely as their white counterparts to face punishment.

Don Christensen, president of the group, told CQ Roll Call in a statement Tuesday that he hopes Brown’s confirmation as Air Force chief will accelerate the service’s efforts to improve the situation.

“Air Force leadership has known for decades that Black airmen are punished disproportionately and denied career advancements commensurate with white airmen,” said Christensen, who was formerly an Air Force colonel and the service’s top prosecutor. “I am hopeful the confirmation of General Brown will be an inspiration for all airmen that the Air Force is moving in the right direction.”