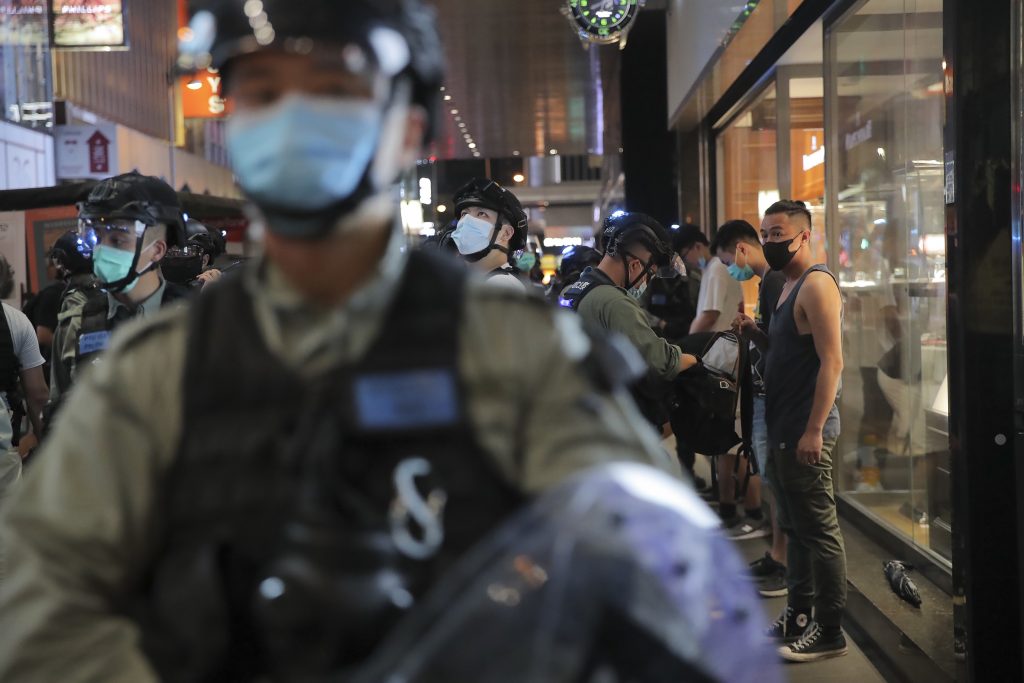 Hundreds of people marched in Hong Kong’s streets on Tuesday to mark a year since the start of anti-government protests, as the leader of the semi-autonomous city called for peace and stability.

“Everyone has to learn their lesson, including the Hong Kong government,” Carrie Lam told reporters. “Hong Kong cannot bear that kind of chaos, and the people of Hong Kong want a stable and peaceful environment to be able to live and work here happily.”

Lam did not elaborate on what lessons should be learned.

Hundreds of protesters marched in Hong Kong’s central district on Tuesday evening and shouted slogans including “Hong Kong independence, the only way out” and “Fight to the end.”

They marched despite police warnings that force could be used to disperse participants and that they faced up to five years in prison. Riot police later charged at a group of protesters, deploying pepper spray and tackling some to the ground.

At least 25 people were arrested for participating in unauthorized assemblies, disorderly conduct and other offenses, police said. Some protesters were also stopped and searched by police.

“Lawful protests are always respected but unlawful acts are to be rejected. Please stop breaking the law,” police said in a tweet.

Tuesday is the one-year anniversary of a huge march through central Hong Kong that grew into a pro-democracy movement that saw protesters break into the legislative building and take to the streets every weekend for months.

“The mass protest on 9 June last year has been etched in the collective memory of Hongkongers,” the Civil Human Rights Front, which organized the event, wrote in a social media post on Tuesday. “It also marks the beginning of our togetherness in defending our beloved city.”

Protesters also gathered in shopping malls to mark the anniversary at lunchtime, holding up signs and banners reading “Liberate Hong Kong” and singing protest songs. Police closed some streets and walkways ahead of possible protests.

The June 9, 2019, march was in opposition to a proposed extradition bill that would have allowed people in the former British colony, which has its own legal system, to be sent to mainland China to face trial. Organizers pegged the turnout at more than a million people, while police estimated the crowd at 240,000.

In the ensuing months of protests, violent clashes broke out at times between protesters and the police, leading to accusations of police brutality and sparking protester demands for an independent inquiry into police behavior.

There was a lull in protests during the coronavirus outbreak early this year, but as infections have ebbed, protesters have returned to the streets to demonstrate against an imminent national security law for Hong Kong as well as a recently approved law that makes it illegal to insult the Chinese national anthem.

Critics and protesters say the national security law is a blow to the “one country, two systems” framework following the handover of Hong Kong from Britain to China in 1997, which promised the city freedoms not found on the mainland.

China blames the protests in part on foreign intervention and is hastening to enact the national security law aimed at curbing secessionist and subversive activities in Hong Kong.

Hong Kong’s problems are a result of the opposition and foreign allies “attempting to turn Hong Kong into an independent or semi-independent political entity and a pawn to contain China’s development,” Zhang Xiaoming, deputy director of the Chinese Cabinet’s Hong Kong and Macao Affairs Office, said in a speech posted on the office’s website on Monday.

“The more the bottom line of national security is consolidated, the greater the space will be for Hong Kong to leverage its advantages under ‘one country, two systems,’” Zhang said.

China will “unswervingly” protect its sovereignty and block any outside interference in Hong Kong’s affairs, he said.