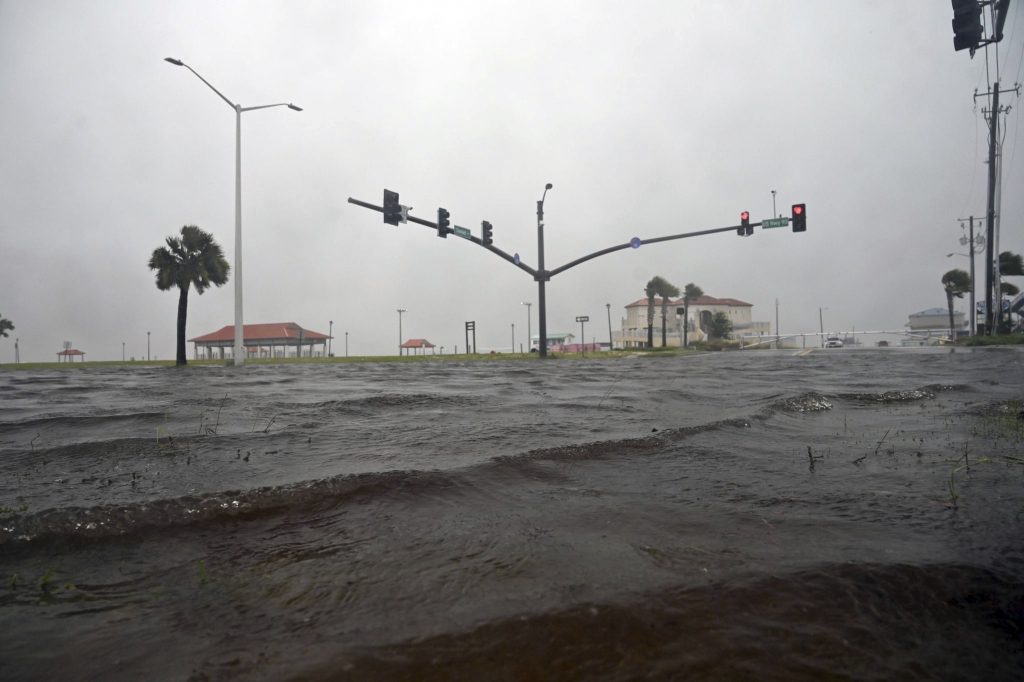 After plowing ashore with strong winds and a damaging storm surge exceeding six feet on Sunday, Tropical Depression Cristobal just won’t quit. Continued heavy rains and a few tornadoes are likely from the Missouri Valley to the Midwest on Tuesday as Cristobal’s remnant tropical circulation continues to whir its way northward.

The unusual system could become the farthest north and west tropical system on record, set to breeze into Canada while retaining some tropical and subtropical characteristics. Eventually, Cristobal could produce winds at tropical-storm force again as it merges with another weather system and sideswipes the Hudson Bay in Canada.

Flash-flood watches are in effect from Missouri to northern Wisconsin, having stretched on Monday more than 1,000 miles from near the Gulf Coast to the Canadian border.

Cristobal’s center of circulation was in central Missouri as of midmorning Tuesday, moving north at about 30 mph. High-altitude clouds fanning outward from the system stretched from the Upper Peninsula of Michigan to the Gulf Coast, and east toward Washington.

The storm has produced heavy rain, particularly in areas far from the center of its circulation. The biggest rainfall totals were found 400 miles from Cristobal’s center. A total of 17.43 inches fell in Live Oak, Fla., along Interstate 10, midway between Tallahassee and Jacksonville. Fargo, Fla., picked up 11.65 inches, while White Springs registered just above 10 inches. Amounts were highly variable, given the localized nature of the heaviest rain bands.

Closer to the center, 11.04 inches were reported in Pascagoula, Miss., part of a swath that has brought a widespread 3 to 4 inches across north-central Arkansas and central Missouri.

That same strip of moderate to heavy rainfall will extend farther north Tuesday as Cristobal’s remnants make a beeline for Canada, a route expected to bring heavy rain.

Two to 4 inches of rain remain possible through late Tuesday or early Wednesday in central Missouri, eastern Iowa and the southeastern corner of Minnesota. That includes cities such as Columbia and Jefferson City, Mo.; Cedar Rapids and Iowa City, Iowa; and Rochester, Minn., Northwestern Wisconsin and the Upper Peninsula of Michigan could get 1.5 to 2 inches.

Cristobal’s remnants may bring tornadoes to parts of the Midwest and much of the northern Mississippi Valley. The Storm Prediction Center has placed those areas under a Level 2 out of 5 “slight risk” for severe weather, including tornadoes, Tuesday.

The greatest risk for isolated tornadoes encompasses areas between Chicago; Bowling Green, Ky.; just north of Memphis, Tenn.; and east of St. Louis. Tornadoes are possible outside that zone, but with a decreasing likelihood.

The system has spawned tornadoes in Florida, including a 105 mph EF1 that hit the Orlando metro area.

The gradually decaying system is slated to merge with a larger upper-level storm system in the next 24 to 36 hours, becoming a hybrid storm system that could intensify as it begins to derive energy from the jet stream en route to the Hudson Bay area. (Purely tropical storms get their energy from warm ocean waters.)

During this process, its winds could increase slightly. A few wind gusts stronger than 50 mph are possible along the shores of Lake Michigan, particularly in western Michigan between Muskegon and Ludington.

A few gusts over 45 mph will probably occur over the southern reaches of the Hudson Bay before the system winds down in the Quebec area.

Well before its landfall in Louisiana, Cristobal produced deadly flooding and mudslides in Central America. After forming over the eastern Pacific on May 31 and earning the name Amanda, its remnants crossed Central America and brought extreme rainfall to parts of Mexico, Guatemala, Honduras and El Salvador. At least 30 people were killed by flooding in El Salvador, while rain totals higher than 25 inches were observed in Mexico.

During its Gulf Coast landfall, Cristobal produced a storm surge that produced significant saltwater flooding from Louisiana to Florida, with a surge of up to 6.2 feet measured in Shell Beach, La. — exceeding initial forecasts of 3 to 5 feet. Bay St. Louis, Miss., experienced a 5.7-foot surge, while water levels in nearby Pascagoula ran 4.1 feet above otherwise expected values.

Even Tampa, Fla., far from the storm center, wound up with a surge of about a foot and a half of rain because of the strong onshore flow of air across the eastern Gulf of Mexico. Water levels receded during much of Monday.