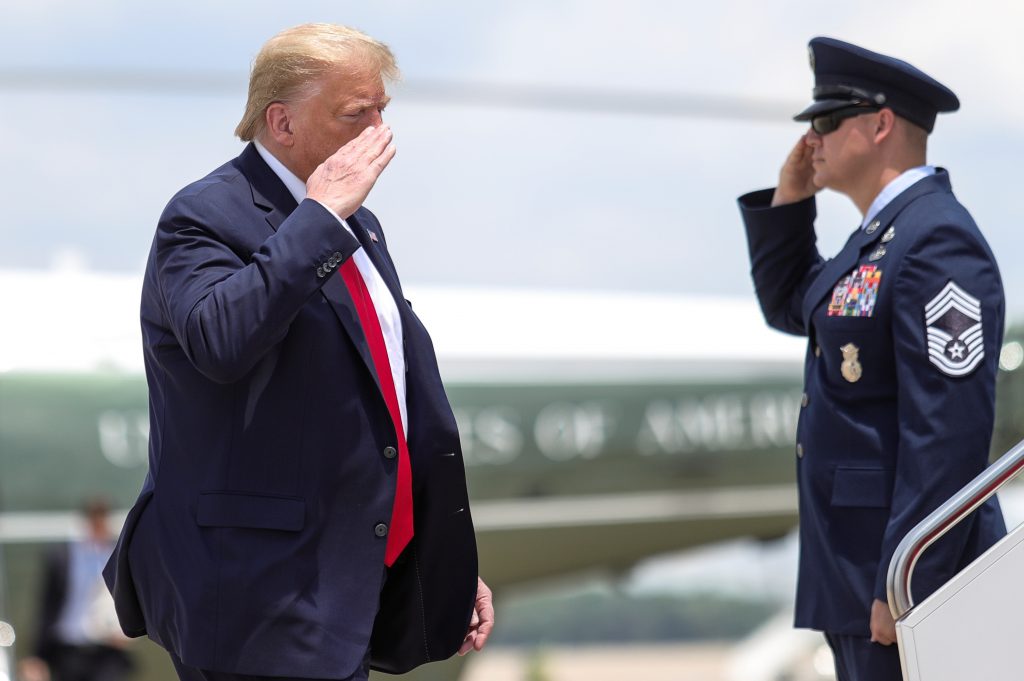 President Donald Trump told his advisors at one point this past week he wanted 10,000 troops to deploy to the Washington, D.C, area to halt civil unrest over the killing of a black man by Minneapolis police, according to a senior U.S. official.

The account of Trump’s demand during a heated Oval Office conversation on Monday shows how close the president may have come to fulfilling his threat to deploy active duty troops, despite opposition from Pentagon leadership.

At the meeting, Defense Secretary Mark Esper; the chairman of the Joint Chiefs of Staff, General Mark Milley; and Attorney General William Barr recommended against such a deployment, the official said, speaking on condition of anonymity. The meeting was “contentious,” the official added.

Trump has since appeared satisfied with deployments by the National Guard, the option recommended by the Pentagon and a more traditional tool for dealing with domestic crises. Pentagon leaders scrambled to call governors with requests to send Guard forces to Washington. Additional federal law enforcement were mobilized too.

But also key for Trump appears to have been Esper’s move to preposition – but not deploy – active duty soldiers from the 82nd Airborne Division and other units in the Washington, D.C., area in case they were needed. Those troops have since departed.

“Having active duty forces available but not in the city was enough for the president for the time,” the official said.

Trump’s bid to militarize the U.S. response to the protests has triggered a rare outpouring of condemnation from former U.S. military officials, including Trump’s first defense secretary, Jim Mattis, and retired four-star generals who normally try to steer clear of politics.

Those comments reflect deep unease inside and outside the Pentagon with Trump’s willingness to inject the U.S. military into a domestic race-relations crisis following the killing of George Floyd, 46.

Floyd’s death has led to a wave of protests and national soul-searching over the country’s legacy of violence and mistreatment of African Americans and other minorities.

It has also led some Pentagon leaders of color to issue unprecedented statements about their experiences dealing with issues of race in the U.S. military.

Esper publicly voiced his opposition on Wednesday to invoking the Insurrection Act to deploy active duty forces — remarks to reporters that did not go over well with either Trump or his top aides.

The senior U.S. official said Trump yelled at Esper after that news conference.

As speculation swirled over whether the president might fire him, White House spokeswoman Kayleigh McEnany said Trump “remains confident in Secretary Esper.”

“Secretary Esper has been instrumental in securing our nation’s streets and ensuring Americans have peace and confidence in the security of their places of business, places of worship, and their homes,” McEnany said in a statement.

Esper issued a memo on Tuesday reminding Defense Department personnel “we commit to protecting the American people’s right to freedom of speech and to peaceful assembly.”

Milley issued a similar statement reminding troops of their oath to the U.S. Constitution, which protects the right to peaceful protests.

Those statements by Milley and Esper came after they took fierce criticism for using military planning terms like “battlespace” to describe American protest sites during a conference call with state governors that Trump hosted on Monday, a recording of which leaked.

At the time, the Pentagon was concerned that Trump might deploy active duty troops if the governors did not sufficiently employ the National Guard, the official said.

Esper and Milley have also faced criticism for accompanying Trump for a photo opportunity outside a church near the White House on Monday after police cleared the area by firing smoke grenades and chemical irritant “pepper balls” and charging into peaceful protesters.