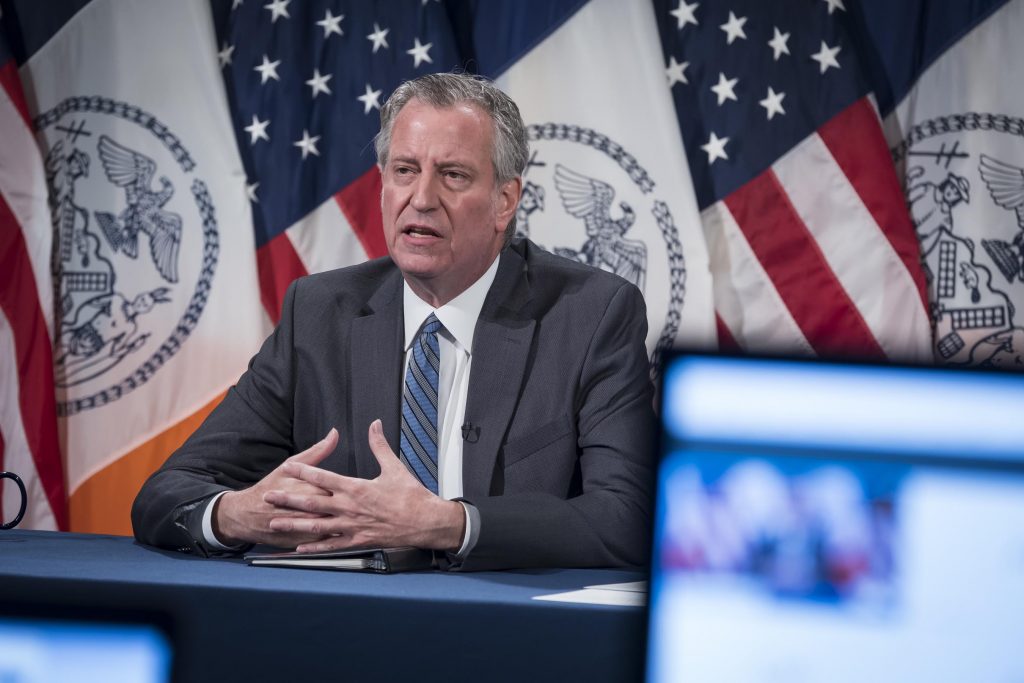 New York City Mayor Bill de Blasio reiterated his commitment to permitting protests against police misconduct, even while banning other gatherings during the coronavirus pandemic, saying it is “common sense” that “this is different.”

The mayor had been asked by a Hamodia reporter at his press conference Tuesday why those protesting the death of George Floyd, a black man in Minneapolis who died during an arrest while a police officer knelt on his neck, may violate the ban on gatherings, even while he is enforcing the closure of retail stores and a ban on religious services over 10 people. The mayor replied then, “When you see a nation, an entire nation, simultaneously grappling with an extraordinary crisis seeded in 400 years of American racism, I’m sorry, that is not the same question as the understandably aggrieved store owner or the devout religious person who wants to go back to services.”

At Friday’s press conference, the Hamodia reporter followed up, asking de Blasio how his comments that these protestors be given allowances not afforded others during the pandemic, is consistent with the U.S. Supreme Court’s ruling that First Amendment regulations must be viewpoint-neutral.

The mayor, who had participated in one of these protests in Brooklyn on Thursday, insisted these Black Lives Matters protests would continue to be treated differently than others during the pandemic, though he also reiterated that he preferred people stay home, noting that the number of hospitalizations in the city due to COVID-19, one of the “daily indicators” in the fight against the disease, jumped from 48 the previous day to 84. The number is still relatively low and well below the city’s target of under 200 hospitalizations per day.

Below is the full text of the mayor’s exchange with the reporter:

Question: The Supreme Court has said that any First Amendment regulations must be viewpoint-neutral. You’ve specifically stated this week that these protesters are “not the same question” as other gatherings because “of 400 years of American racism,” and therefore you’re treating them differently than other gatherings. How does that square with the Supreme Court’s requirement that regulations on the First Amendment must be viewpoint-neutral?

Answer: Look, I’m not a lawyer, but I feel very strongly, Reuvain, on the common-sense point here, which is, we are seeing a national historic moment of pain and anguish, and a deep cry for help, and a deep cry for change. It is not your everyday situation. When we were dealing with this virus in the beginning, we said very consistently across all communities, we want to avoid gatherings. I still want to avoid gatherings. I want the people to understand that, one, protesters are making their voices heard. They’re saying something very important. I’m hearing it loud and clear, change is going to happen, we have to show people that change. But, notwithstanding that this is a very particular moment, I still want to see people more and more choose to make their voices heard in other ways and not take the risk of gathering. And until we are out of the woods – and this indicator today that, you know, is going in the wrong direction as a reminder of this –until we’re out of the woods on this virus, we’re still better off with people not coming out and gathering in this way. But, you know, I am happy to have any discussion with anyone about why this is different than what we are dealing with day to day, and why it has to be understood and respected: people’s sheer anger and fear and pain has to be expressed so we can get past it and make change and move forward in peace.