Shots rang out this morning near the 101st Precinct in Far Rockaway near Gateway and Mott Avenues. An intensive manhunt took place with SWAT teams combing the area and NYPD helicopters hovering overhead. Four suspects escaped in a black Chrysler.

Reports followed that the car was stopped and 3 suspects were apprehended. One suspect fled on foot, and a search began in the area between Mott and Caffrey Avenues. The police employed SWAT teams and dogs in their search as they swept through backyards throughout the area.

A while later, two young boys reported that a man matching the description (Blue Durag, green sweatshirt, white pants) stopped them and told them, “Don’t move, but I’m not going to hurt you,” before he fled behind the garage. The boys ran home and contacted the police, who immediately stormed the house where they apprehended the suspect who was hiding in the attic. 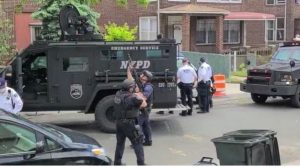 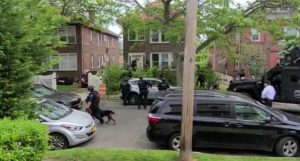 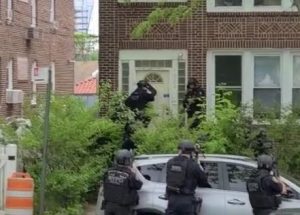