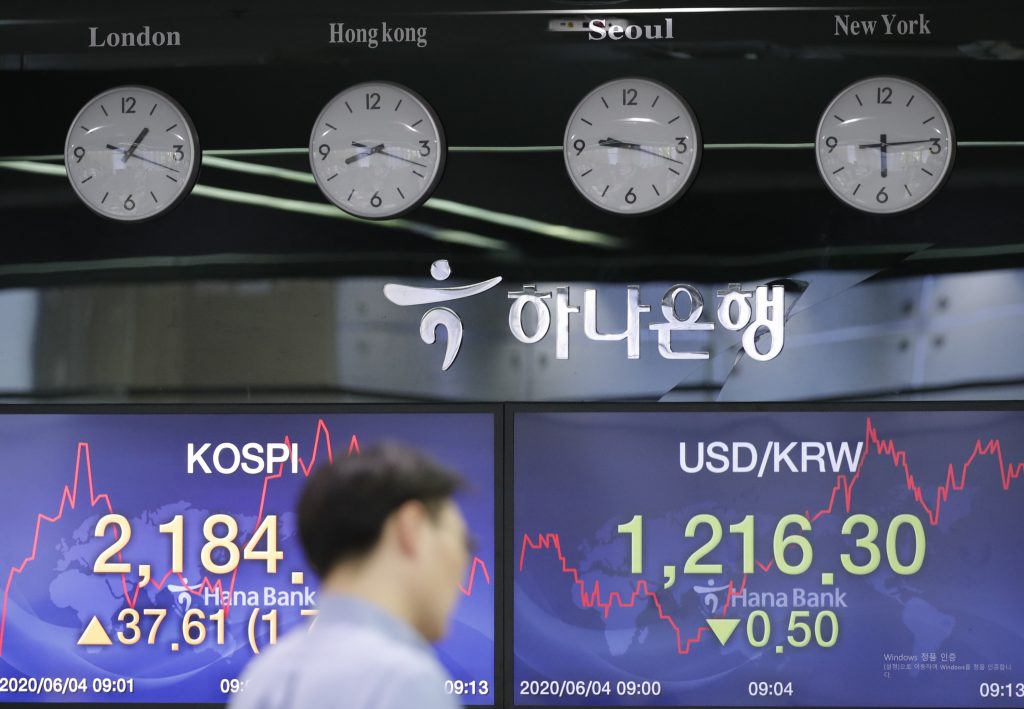 Stock markets have risen on optimism about a possible global recovery from the coronavirus pandemic as more economies reopen despite rising case numbers in the United States, Brazil and other countries.

“The not too bad news keeps coming, enabling the hopes for economic rebound alongside the reopening,” said Jingyi Pan of IG in a report.

On Wall Street, futures for the benchmark S&P 500 index and the Dow Jones Industrial Average were down 0.3%.

A survey from payroll processor ADP said private employers cut nearly 2.8 million jobs last month — less than the 9.3 million that economists told investors to expect. That raises optimism that Friday’s more comprehensive jobs report from the U.S. government may also not be as bad as feared. Economists say it may show a loss of 8 million jobs, which would be a deceleration from April’s loss of 20.5 million.

Other reports showed the U.S. economy is in bad shape but not as dismal as forecast.

One report said services industries contracted by less than economists expected, and at a more modest rate than in April. Another report said factory orders dropped 13% in April, but not by as much as the 14.8% that economists had forecast.

Companies that would most benefit from a growing economy led the market Wednesday, continuing a recent trend as hopes rise that the economy and life in general can become closer to normal as business-shutdown orders lift.

Stocks have been climbing since late March, at first on relief after the Federal Reserve and Congress promised massive amounts of aid for the economy. More recently, the driving force has been optimism that growth can resume as states across the country and nations around the world lift restrictions on businesses intended to slow the spread of the outbreak.

Widespread protests around the country following the killing of George Floyd haven’t dented the rally. One worry is that by bringing so many people together, the protests could also lead to more coronavirus infections.

Many professional investors have been warning that the stock market’s rally may have been too much, too soon. The recovery for the economy is likely to be much slower than the sharp rebound the stock market has just undertaken, which could be setting investors up for disappointment.

In energy markets, benchmark U.S. crude lost 44 cents to $36.85 per barrel in electronic trading on the New York Mercantile Exchange. Brent crude, the benchmark for international oils, shed 22 cents to $39.57 per barrel in London.