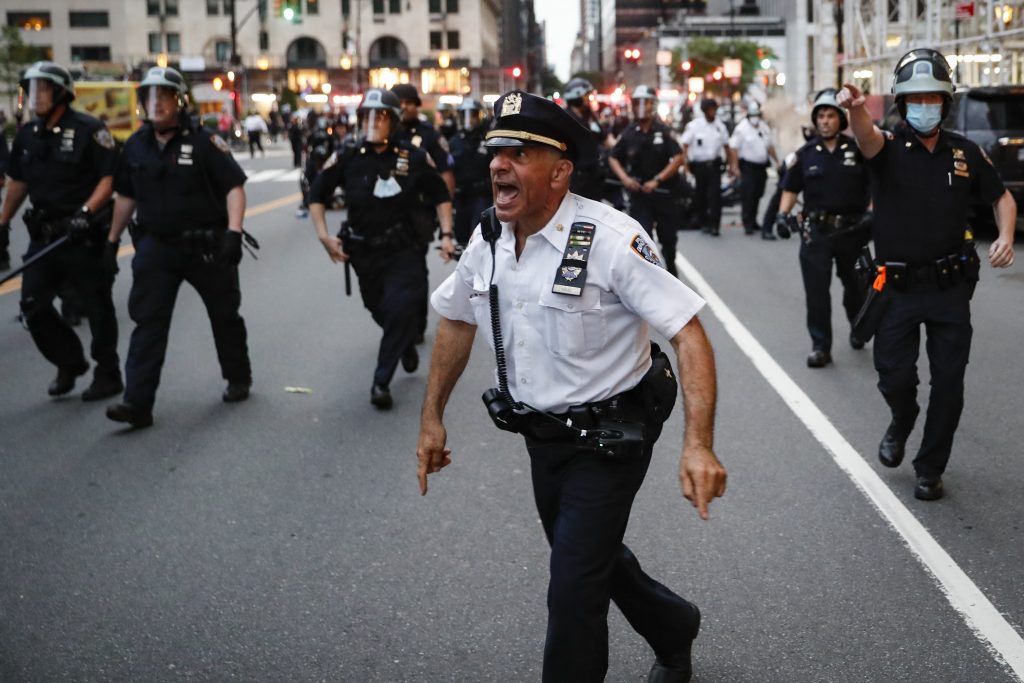 Peaceful protests over the death of George Floyd continued Wednesday in New York City, but an early curfew, drenching rain and refined police tactics appeared to have stopped some of the destruction of previous nights.

Some critics said the calm came at a high price, as the city was forced to grind to a halt at 8 p.m., bridges were closed to traffic and police arrested dozens of orderly people for violating the curfew.

About an hour after the deadline to get off the street, officers began moving in on crowds of demonstrators in Manhattan and Brooklyn, at times blasting people with pepper spray or using batons to shove people who didn’t move fast enough.

When one demonstrator asked an officer why he was being taken into custody, an Associated Press reporter heard the officer reply, “Curfew violator. You didn’t hear the news?”

NYPD Chief of Department Terence Monahan said about 60 people were arrested near Central Park out of a large band of protesters who had marched from near the mayor’s residence, Gracie Mansion. Police moved in just before a heavy rain began.

“When we have these big crowds, especially in this area, especially where we’ve had the looting, no more tolerance. They have to be off the street. An 8 o’clock curfew, we gave them until 9 o’clock, and there was no indication that they were going to leave these streets,” Monahan said, noting that the crowd was allowed to disperse once arrests began, and most did.

City Public Advocate Jumaane Williams, who attended a rally in downtown Brooklyn, expressed outrage that peaceful demonstrations were broken up.

“I can’t believe what I just witnessed & experienced,” Williams wrote on twitter. He called the use of force on nonviolent protesters “disgusting.”

As the evening deepened, there were few reports of the mayhem that had occurred on several days of demonstrations, when protesters burned police vehicles and showered officers with debris. Gone also were the roving bands of people who smashed their way into scores of stores and stole merchandise Sunday and Monday nights.

At Gracie Mansion, demonstrators were kneeling in a moment of silence when alarms rang on cellphones, warning that the curfew was approaching.

“This means a lot to me, as a black woman,” said protester Stella Mbah, who kept marching after the curfew passed. “There are so many things police are doing wrong to us black people.”

Another demonstrator, Lisa Horton, said charges announced Wednesday against three other Minneapolis police officers in connection to Floyd’s death were a step, but she was protesting because she feels more needs to change.

“There’s been progress, but are we at a point where we can all celebrate? No,” she said, calling for “radical change” in the criminal justice system.

“Last night we took a step forward in moving out of this difficult period we’ve had the last few days and moving to a better time,” he said at a morning news briefing.

Gov. Andrew Cuomo, who was critical of the police response on prior nights, said the city Tuesday “was much, much better than the night before.”

“It worked. We got results,” Gov. Cuomo said. “Let’s just remember what we did last night and keep that going.”

Mayor de Blasio rejected President Donald Trump’s urging and Cuomo’s offer to send in the National Guard to stop the ransacking of stores, saying the NYPD was best suited for the task.

President Trump warned in a Fox News Radio interview that if city officials “don’t get their act straightened out, I will solve it. I’ll solve it fast,” but didn’t say what action he might take.

Around Manhattan, even in parts of the city that hadn’t seen the damage and thefts, businesses had boarded up windows Wednesday as a precaution. That was the case at Saks Fifth Avenue, where a line of tattooed men with well-mannered dogs guarded the boarded windows wrapped in chain-link and razor wire.

The nightly curfews will remain in effect through at least Sunday, with the city planning to lift them at the same time it enters the first phase of re-opening after more than two months of shutdowns because of the coronavirus.

The marches were part of a wave of protests across the country since the May 25 death of Floyd.

Police said they arrested about 280 people on Tuesday, compared with 700 the previous night. In all, more than 2,000 people have been arrested, the NYPD said.