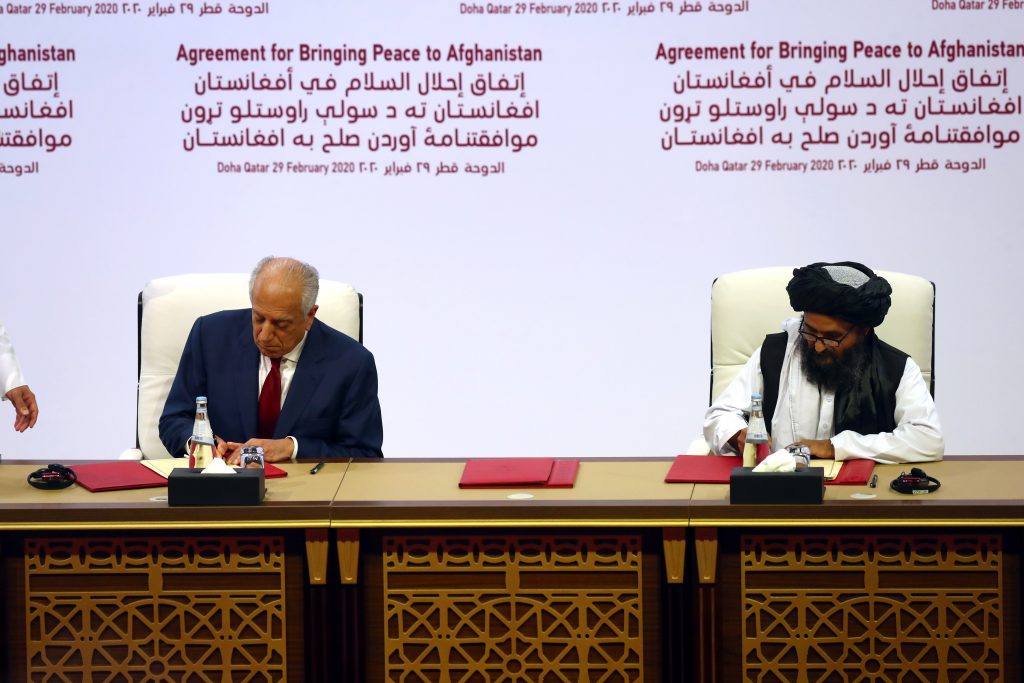 The Taliban in Afghanistan still maintain close ties with the al-Qaida terror network, despite signing a peace deal with the United States in which they committed to fight terrorist groups, a U.N. report released on Tuesday said.

The Taliban promptly slammed the report as “baseless and bigoted.”

The U.S.-Taliban accord, signed in Qatar’s capital of Doha at the end of February, was meant to allow for American troops to gradually leave Afghanistan after 19 years of war and pave the way for intra-Afghan negotiations that would shape the country’s political future.

Under the accord, the Taliban pledged to combat other terror groups — including al-Qaida, which they once harbored — and prevent terrorists from using Afghan territory to stage attacks on America.

But the details of the Taliban counterterrorism commitment were never publicized. Zalmay Khalilzad, Washington’s peace envoy and the architect of the deal, says the secrecy is necessary to protect intelligence operations involved in enforcing it.

He insisted that “progress has been made and our future steps in terms of force reduction and related commitments” now depend on the Taliban delivering on their promise.

The U.N. committee behind the report said several significant al-Qaida figures were killed over the past months, but a number of prominent leaders of the group, once led by Osama bin Laden, remain in Afghanistan. The report said they maintain links with the feared Haqqani network, an ally of the Taliban, and still play a significant role in Taliban operations.

The concept of “holy war” and a shared history continue to bind the two terrorist groups. Several top al-Qaida leaders, such as Ayman al-Zawahiri who succeeded bin Laden as the terror network’s leader, trace their involvement in Afghanistan to the 1980s war against the invading Soviet Union, when the Afghan mujahedeen, or holy warriors, were financed by the U.S. to oust Moscow’s troops.

Taliban spokesman Zabihullah Mujahid issued an English-language statement condemning the U.N. report. The Taliban, he said, “in accordance with the Doha agreement, will not allow anyone to use the soil of Afghanistan against anyone else or maintain training camps or use our soil to fund raise against others.”

Critics of the U.S.-Taliban deal have expressed concern at its vagueness, warning that it makes monitoring the insurgents’ compliance difficult.

“One of the many problems with a very flawed deal is that the demands of the Taliban on counterterrorism are worded very vaguely,” said Michael Kugelman, deputy director of the Asia program at the Washington-based Wilson Center. He said the deal doesn’t even mention al-Qaida by name.

“At the very least, Washington should be demanding that the Taliban cease all communication with senior al-Qaida figures,” Kugelman said.

The U.N. report, however, did note the Taliban’s contribution in fighting the Islamic State group’s affiliate in Afghanistan. The IS has become increasingly aggressive, carrying out horrific attacks in the capital, Kabul. The group is also believed to have been behind a brutal assault on a hospital last month that killed 24.

In his Monday telephone interview with reporters, Khalilzad also said the Taliban have been an important part in the battle by U.S. and Afghan forces against IS.

“Daesh is working against peace … and they have been responsible … for some of the most dastardly attacks recently,” he said, using the Arabic name for IS.

Still, Kugelman warned against underplaying the Taliban ties to al-Qaida. “If the U.S. simply shrugs off the Taliban’s continued ties to the very terror group that U.S. forces entered Afghanistan to eliminate nearly 19 years ago, then you’d have some really bad optics, to say the least,” he said.