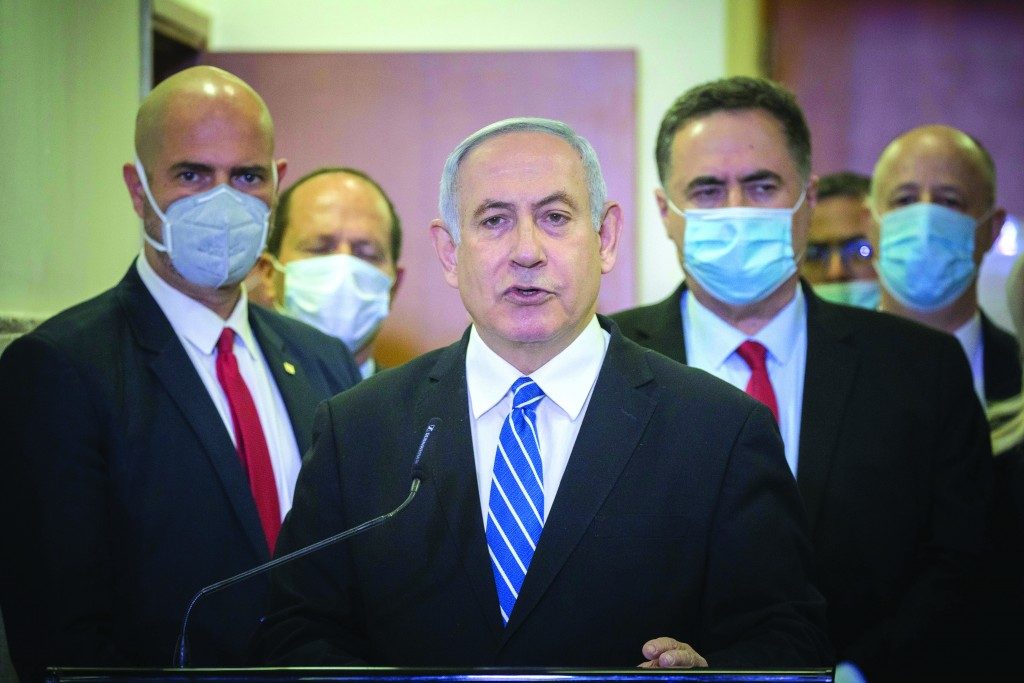 The trial of Binyamin Netanyahu has begun and the battle lines have been drawn. His supporters, comprising half the country, are convinced that he’s the victim of a corrupt judicial system that seeks to subvert the political process and bring down their choice of prime minister, while his opponents view him as evil incarnate, the “crime minister.”

Netanyahu has no faith in the police, prosecutors or courts and he made that clear at a press conference held at the Yerushalayim District Court just before his proceedings began. “The objective [of the trial] is to depose a strong, right-wing prime minister, and thus remove the nationalist camp from the leadership of the country for many years,” he said, adding that police and prosecutors had conspired to “tailor” a case against him.

To be sure, Netanyahu has reason to feel that the legal deck has been stacked against him. In Case 2000, he stands accused of corruption for having discussed the possibility of receiving less-biased coverage in Yediot Acharonot in exchange for getting the paper’s competitor, Yisrael Hayom, to lower its profile.

In a political system that has always seen politicians cut deals with journalists — “I’ll feed you scoops if you give me good coverage” — it is unfathomable that Netanyahu is being charged with breach of trust in this case (and that some members of the prosecution team wanted him indicted for bribery!).

As Professor Alan Dershowitz, a distinguished lawyer and Harvard law professor, said last week: “Netanyahu’s trial poses great danger to democracy and the rule of law. This is the first time in the history of any modern country that a man is being prosecuted for trying to gain positive media coverage.”

The other two cases — one involving Netanyahu’s receipt of gifts from wealthy friends and the other his offer of regulatory benefits to the head of Bezeq in exchange for favorable coverage on a news site — are said to be more substantial according to legal experts, but there is simply too much evidence backing the prime minister’s assertion that the police and prosecution played dirty in building the cases against him.

In addition, the courts over the years have earned the country’s distrust, showing disdain for the public’s Jewish values and consistently favoring one side of the political divide.

Netanyahu is in the fight of his political life and feels that he has no chance in a court of law. That’s why he’s playing to the court of public opinion, using his superb oratorical skills to sell his case to the public.

But he’s playing with fire. In stoking public distrust of the courts, instead of implementing reforms to correct them, he is seriously undermining public confidence in Israeli justice, which is to the detriment of Israel as a functioning democracy.