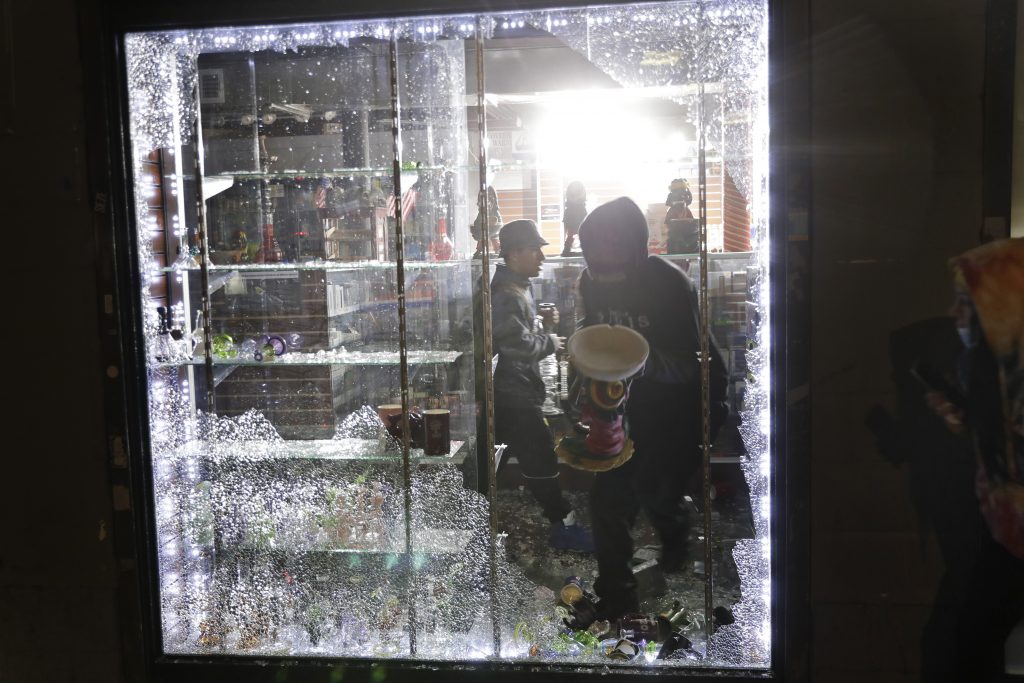 New York City imposed a late-night curfew Monday that failed to prevent another night of destruction, including arrests at the iconic Macy’s store on 34th Street, following protests over George Floyd’s death.

With an 11 p.m. to 5 a.m. curfew, New York joined other cities around the country in imposing such measures after days of unrest. The limit on a city of more than 8 million people comes after months of restrictions already imposed because of the coronavirus pandemic.

But enough mayhem happened before the curfew took effect that Mayor Bill de Blasio tweeted that it would move up to 8 p.m. Tuesday.

As the deadline to get off the streets approached, bands of protesters marched through Manhattan and Brooklyn, and police simultaneously responded to numerous reports of roving groups of people smashing their way into shops and emptying them of merchandise.

The doors of Macy’s flagship Manhattan store were breached, and police pulled two handcuffed men out and put them in a van.

People rushed into a Nike store in Manhattan and carried out armloads of clothing. Near Rockefeller Center, storefront windows were smashed and multiple people arrested. Wreckage littered the inside of an AT&T store.

Video posted on social media showed some protesters arguing with people breaking windows, urging them to stop, but instances of vandalism and smash-and-grab thefts mounted as the night deepened.

“We worked hard to build up the business, and within a second, someone does this,” said the owner of a ransacked Manhattan smoke shop, who identified himself only by the name Harri. “Really bad.”

De Blasio and Gov. Andrew Cuomo said the outbreaks of violence the previous two evenings — which left stores ransacked and police vehicles burned — gave them no choice to impose a curfew, even as they insisted they stood with the throngs of peaceful demonstrators who have spoken out for several days against police brutality and racial injustice.

“We can’t let violence undermine the message of this moment,” de Blasio said in a statement. Cuomo blamed “people who are looking to distract and discredit” the protests and said they couldn’t be allowed to undermine public safety.

The two leaders, both Democrats, said many more police officers would be deployed Monday night.

Big crowds rallied in Times Square and Brooklyn on Monday afternoon and marched through the streets for hours. As in previous days, the demonstrations held in daylight hours were peaceful with officers mostly keeping their distance from marchers. A nighttime march through Brooklyn was also peaceful, with limited action with police.

But midtown Manhattan descended into chaos as night fell.

“There are people who have ulterior motives and they’re trying to hijack the message,” the New Yorker said.

Police Commissioner Dermot Shea expressed doubts earlier Monday about whether a curfew would be heeded. Brooklyn Borough President Eric Adams, a retired police captain whose borough has been a focal point for demonstrations and some damage, also had doubts.

“There are real deep, legitimate wounds, and if we’re not going to put the same level of energy into correcting those wounds as we’re going to put into telling people not to come out at 11, then we’re going to fail, and this is going to prolong the problem,” said Adams, a Democrat.

The New York City Liberties Union said it was “deeply problematic that our leaders are imposing a curfew and essentially silencing New Yorkers from expressing their outrage at the racism that permeates the nation.”

After largely peaceful protests Sunday, groups of people poured down the sidewalks in Manhattan’s chic Soho neighborhood and other areas overnight, breaking into Rolex, Kate Spade and Prada boutiques and electronics stores. Hundreds of people were arrested.

“People are doing this so next time, before they think about trying to kill another black person, they’re going to be like, ’… we don’t want them out here doing this … again,’” New York City resident Sean Jones said as he watched the destruction.