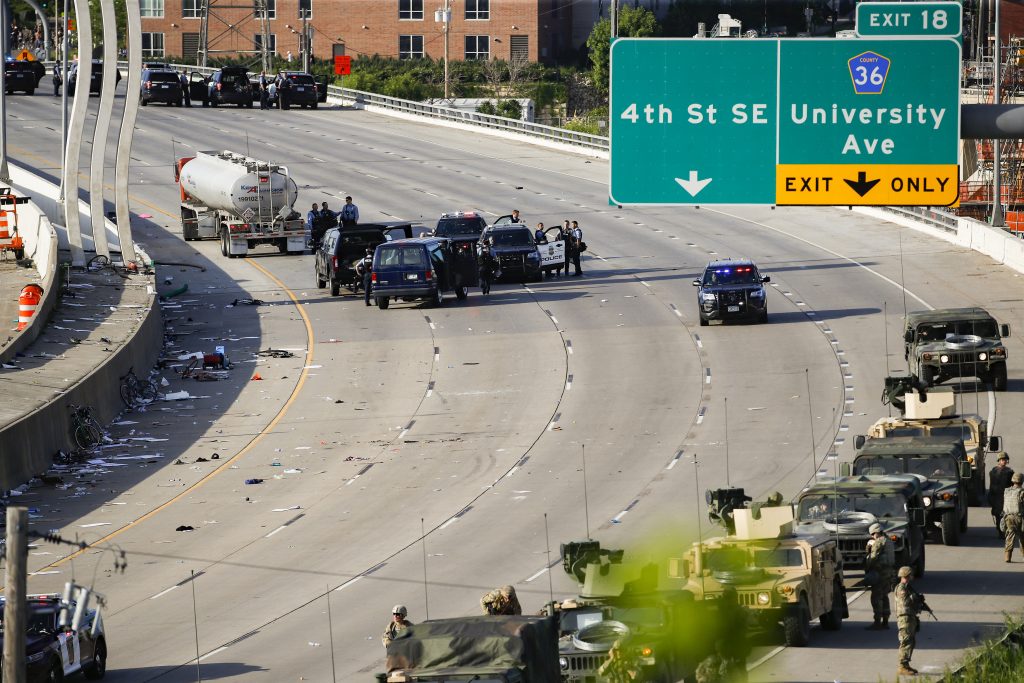 State authorities said Monday that the driver of tanker truck did not intend to hit anyone when he drove onto the I-35W bridge in Minneapolis, sending protesters running for their lives.

Government officials say the trucker, 35-year-old Bogdan Vechirko, may not have realized that I-35W and other interstates had been closed as part of the ongoing unrest sparked by the death of George Floyd last week after an encounter with Minneapolis police.

No injuries among demonstrators have been confirmed, the officials said.

State Public Safety Commissioner John Harrington said Vechirko, driving an empty fuel tanker truck from Interstate 94 on 35W, was speeding but did not go around any barricades and was not acting intentionally.

As Harrington was making his comments at a midday news conference, Vechirko, of Otsego, remained jailed without bail on suspicion of assault and has yet to be charged with any traffic or more serious count.

“He was speeding” when he got to the bridge, Harrington said, “he saw the crowd initially and he panicked.”

Harrington said Vechirko told authorities the he saw “a young woman on a bike fall down in front of him, and he hit the brakes. … There is not any information that makes this seem like this was an intentional act.”

The barriers were meant to be up in time to enforce an 8 p.m. to 6 a.m. curfew, but the Minnesota Department of Transportation was directed about 4:30 p.m. to have its barricades and maintenance trucks in place earlier as protesters marched from outside U.S. Bank Stadium to the bridge, Harrington said.

Witnesses on the 35W bridge over the Mississippi River said dozens among the 5,000 to 6,000 marchers were sitting or had taken a knee for a moment of silence when the northbound truck came hurtling toward them and stopped halfway across the bridge. Demonstrators then swarmed the truck and appeared to drag Vechirko out of the cab. Police closed in and took Vechirko, who was injured, into custody.

At least in Minnesota, Vechirko’s driving record is nearly spotless. He was convicted of a seat belt violation in 2009 and has had dismissed one citation for speeding and two for failure to produce proof of insurance.

The driver’s employer, Ohio-based Kenan Advantage Group, declined to answer questions about the incident after releasing a statement that said in part: “Our hearts go out to all those who are grieving the events of this past week. … We will be cooperating fully with the investigating authorities in the days ahead.”

One motorist, Meaghan Pezon, told the Minneapolis Star Tribune that said she encountered no barricades blocking traffic onto the bridge in the minutes before the truck barreled through the crowd. Pezon was heading home from a day on Lake Minnetonka, driving north toward Roseville on I-35, where she saw about 10 cars heading the wrong way toward her.

“I was confused and knew I should probably turn around, but there was no good place for me to do it,” she said. “I got to the Washington bridge, and my car was surrounded by protesters. When a protester first approached me, there were no police, no barricades, no indication that 35 was closed.”

As police swarmed the area and protesters dispersed, she turned onto an entrance ramp, going the wrong way.

“I really had no idea what was happening on the bridge,” she said. “I just thought I was going home.”