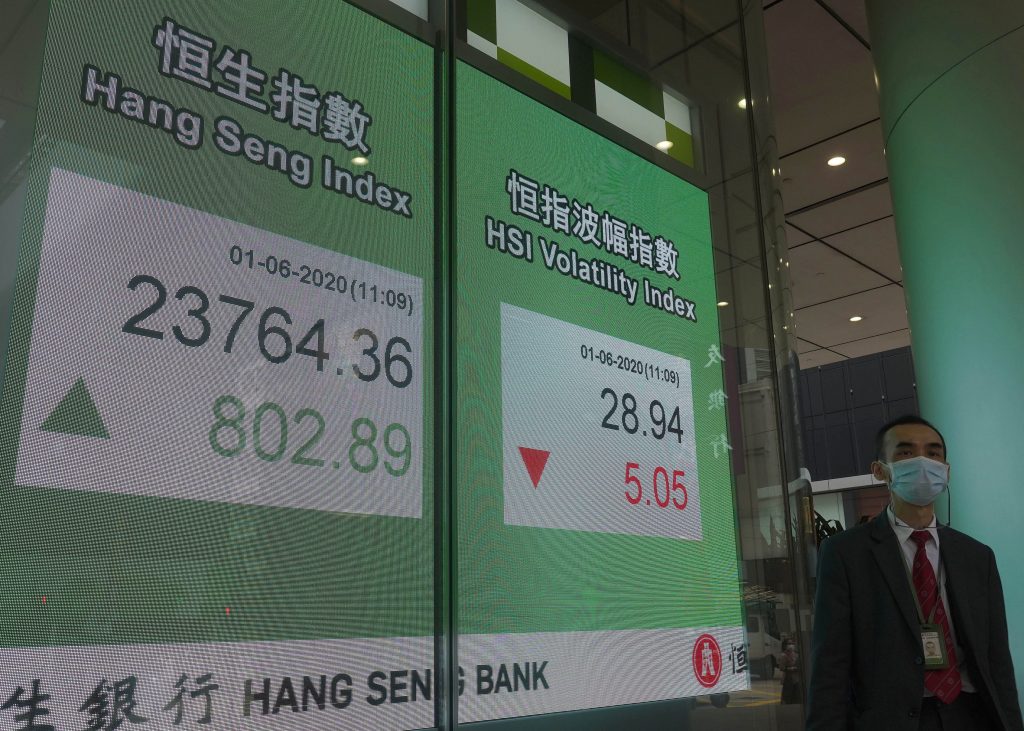 Hong Kong’s stock market surged more than 3% and other Asian markets rebounded Monday after President Donald Trump avoided reigniting a trade war with China amid tension over Hong Kong and the coronavirus pandemic.

Shanghai’s market benchmark gained more than 2% and Tokyo was up nearly 1%.

Global markets sank Friday as investors waited for Trump’s response to Beijing’s security law on Hong Kong. In the end, Trump ended Hong Kong’s special trade status and suspended visas of some Chinese students but avoided pulling out of a truce in a tariff war with Beijing that weighs on global growth.

“Markets may draw hollow consolation that the U.S. is treading carefully,” said Mizuho Bank in a report. However, it warned, relief may be “set to evaporate.”

Meanwhile, a monthly gauge of Chinese manufacturing issued by a business magazine, Caixin, edged up to a four-month high, but new export orders fell from an already low level in a sign of weak global demand.

Also Monday, South Korea reported exports fell 23.7% in May from a year earlier.

U.S.-Chinese tension has weighed on investor optimism about the global economy’s recovery from its deepest slump since the 1930s.

As China and some European countries revive economic activity, stock markets have been regaining much of this year’s losses despite rising numbers of virus cases in the United States, Brazil and some other countries.

On Friday, Wall Street’s benchmark S&P 500 index ended the week with a 3% gain at 3,044.31, following a late-afternoon rally boosted by Trump’s news conference.

Before the virus outbreak, the global economy already was under pressure from the U.S.-Chinese dispute over Beijing’s technology ambitions and trade surplus.

The world’s two biggest traders had raised tariffs on billions of dollars of each other’s goods. They signed a truce in January but Trump has added to market jitters by threatening to pull out if China doesn’t buy more American goods.

On Friday, Trump said Washington would begin eliminating agreements that gave Hong Kong privileges that China lacked, including exemption from some import controls.

That followed the ceremonial Chinese legislature’s endorsement of a security law for Hong Kong that pro-democracy advocates say undermines the autonomy promised to the former British colony.

It is unclear how the decision might affect U.S. companies in Hong Kong or the territory’s status as a finance and business center. But business groups say the uncertainty over its status might hurt its attractiveness to foreign investors.

In energy markets, benchmark U.S. crude lost 30 cents to $35.19 per barrel in electronic trading on the New York Mercantile Exchange. The contract gained $1.78 on Friday to settle at $35.49. Brent crude, used to price international oils, shed 29 cents to $37.55 per barrel in London.