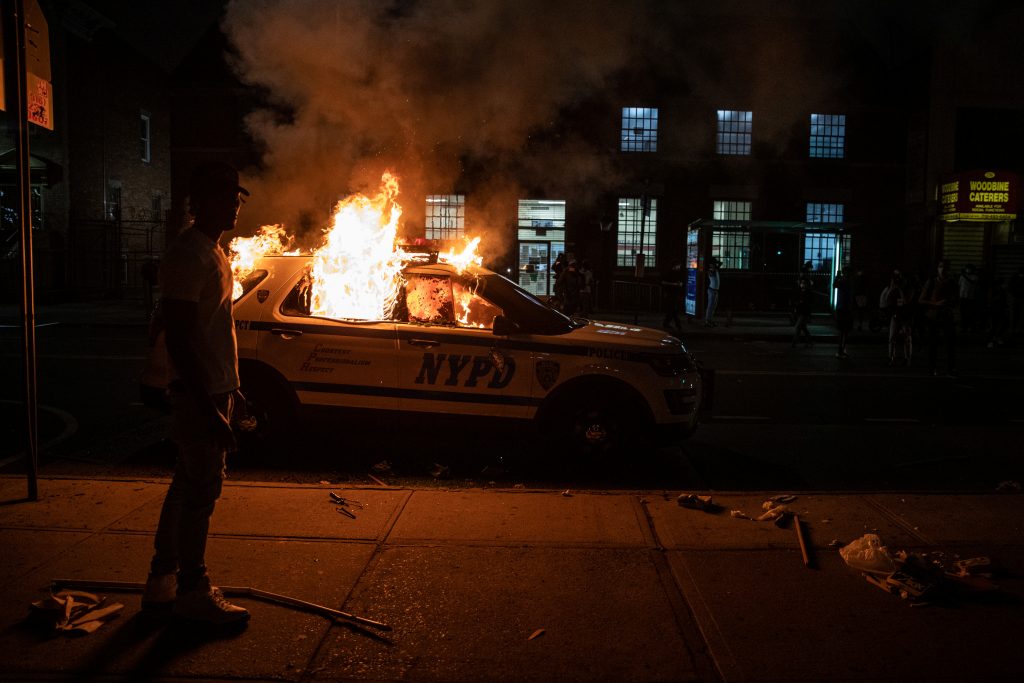 New York City officials were looking for a peaceful way forward after three days of protests against police brutality that left police cars burned and led to the arrests of hundreds of people.

Mayor Bill de Blasio said Sunday that city police showed “tremendous restraint overall,” but he said he was concerned about video showing two police cruisers lurching into a crowd of demonstrators on a Brooklyn street. He was appointing two city officials to conduct an independent review of how the protests unfolded and how they were handled by the police.

New York City police said 345 people were arrested, 33 officers were injured and 27 police vehicles were damaged. There were no major injuries reported. Police Commissioner Dermot Shea said some peaceful demonstrations were “hijacked” by a small number of people with violent intent.

With more protests scheduled Sunday, Shea said his officers will work with demonstrators.

“We’re going to make sure that everyone has the right to peacefully protest and assemble,” Shea said at a briefing with the mayor. “But we are not going to tolerate destruction of property [or] having our officers put into harm’s way or any civilians put into harm’s way.”

Similar protests flared around the nation in response to the Minnesota death of George Floyd. Floyd, who was black, died Monday after a white Minneapolis police officer pressed his knee on his neck until he stopped breathing.

Cleanup was underway Sunday morning in New York City, which is still under a lockdown enacted two months ago when it became the U.S. epicenter of the coronavirus pandemic.

On the Brooklyn block where two police cruisers lurched into a crowd of demonstrators Saturday, knocking several to the ground, the only sign of the previous night’s disturbance was a small pile of glass shards in the street.

Workers power-washed the sidewalk and cleaned up graffiti outside the Barclays Center, the site of two nights of demonstrations. In another Brooklyn neighborhood, the burned remains of a police van torched by protesters were removed. Soot and broken glass were all that remained.

The independent review ordered by de Blasio will be conducted by New York City Corporation Counsel James Johnson, who is the city’s chief lawyer, and Margaret Garnett, Commissioner of the Department of Investigation, which typically investigates suspected wrongdoing and fraud by city employees.