Regional ‘No Justice, No Peace’: Protests Resume in NYC for 4th Day
Regional 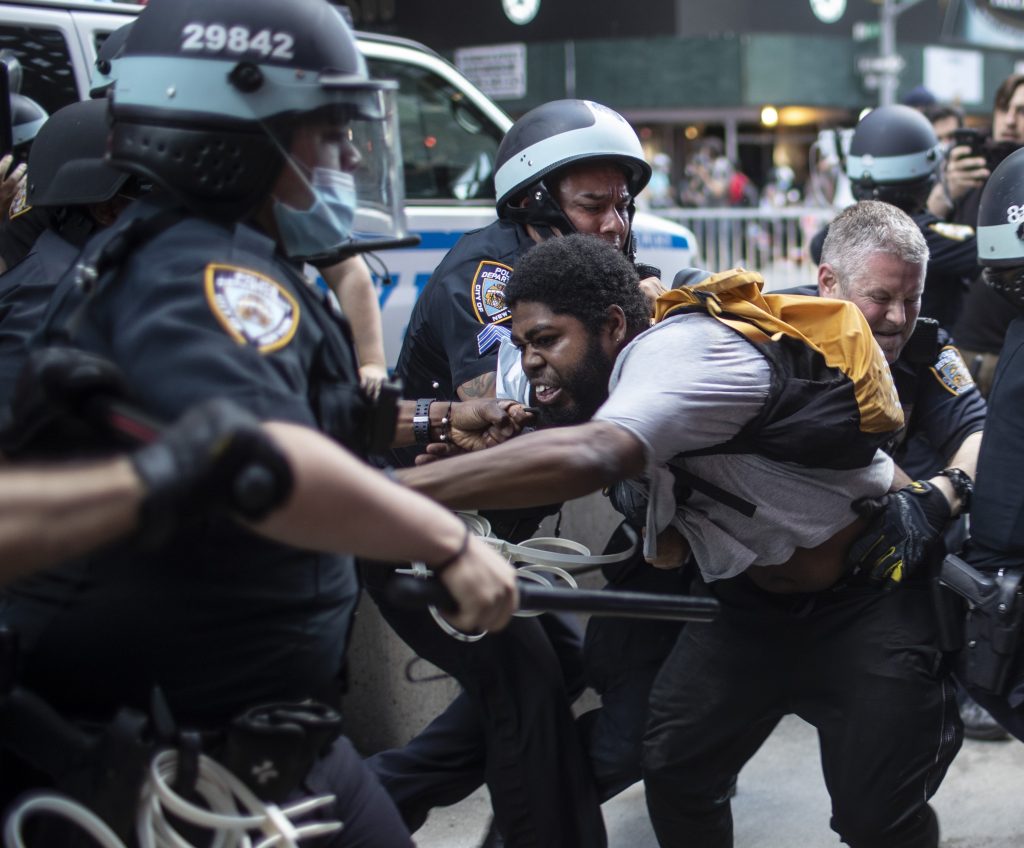 New York City officials were looking for a peaceful way forward as the city entered a fourth day of protests against police brutality that have left police cars burned and led to the arrest of hundreds of people.

Mayor Bill de Blasio said he had no plans to impose a curfew Sunday, unlike other major U.S. cities, and smaller cities throughout the state.

Mayor de Blasio said city police showed “tremendous restraint overall” during the weekend’s protests, but promised an investigation of video showing two police cruisers lurching into a crowd of demonstrators on a Brooklyn street. He was appointing two city officials to conduct an independent review of how the protests unfolded and how they were handled by the police.

Hours after he spoke, demonstrations resumed. Hundreds of people gathered on a plaza in downtown Brooklyn, chanting “No justice, no peace,” and “Black lives matter,” while making occasional insulting gestures at a line of police officers protecting the arena.

There were multiple complaints about police unnecessarily shoving or bludgeoning protesters and spraying crowds with chemicals.

New York City police said 345 people were arrested, 33 officers were injured and 27 police vehicles were damaged or destroyed by fire. There were no major injuries reported. Police Commissioner Dermot Shea said some peaceful demonstrations were “hijacked” by people with violent intent.

Gov. Andrew Cuomo said the National Guard is on standby and that hundreds of additional troopers are being made available in Rochester and Buffalo.

“We expect additional protests tonight and we’re preparing for such,” Gov. Cuomo said at his daily briefing.

The governor also said state Attorney General Letitia James’s investigation into actions by NYPD officers and protesters will include any protests held throughout the weekend.

Cleanup was under way Sunday morning in New York City, which is still under a lockdown enacted two months ago when it became the U.S. epicenter of the coronavirus pandemic.

At least five burned-out NYPD vehicles that remained near Manhattan’s Union Square were towed early Sunday afternoon. People walked around broken glass on the street to take pictures of the vehicles.

A handful of protesters rallied peacefully in the square, holding Black Lives Matter signs and giving speeches denouncing police violence while families were picnicking nearby.

Ken Kidd, who lives a few blocks south of the park, was among the people inspecting the damage to the vehicles and had witnessed Saturday’s demonstrations. He said protesters and police tried to remain peaceful at the start before the stress of a city heavily hit by the coronavirus came out.

“I think a community can only say ‘Enough’ so many times and the words aren’t heard so then they got to take action and that’s what happened last night. That’s what I watched happen last night,” Kidd said.

The independent review ordered by de Blasio will be conducted by New York City Corporation Counsel James Johnson, who is the city’s chief lawyer, and Margaret Garnett, commissioner of the Department of Investigation, which typically investigates suspected wrongdoing and fraud by city employees.