National Mayhem Across the U.S. — Violence Erupts as Protests Sweep the Country
National 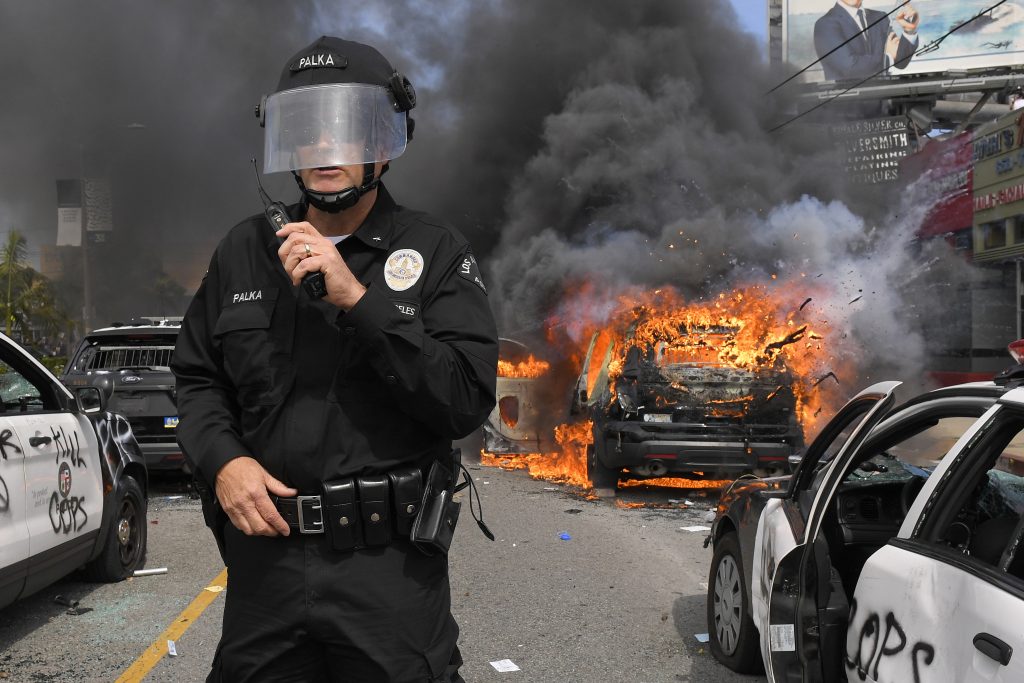 In Texas, much of the demonstrating was peaceful, but the protests became violent Saturday with fires being lit, stores broken into and robbed and people hurt.

Police used tear gas to disperse some of the crowds and said they arrested more than 200 people between Dallas, Houston and Austin.

“Every Texan and every American has the right to protest and I encourage all Texans to exercise their First Amendment rights,” Abbott, a Republican, said in a statement.

“However, violence against others and the destruction of property is unacceptable and counterproductive. As protests have turned violent in various areas across the state, it is crucial that we maintain order, uphold public safety, and protect against property damage or loss.”

The order allows Abbott to designate federal agents to do the work of local police. It comes as some Texas organizers are calling off demonstrations and others are planning to proceed.

It starts at 8 p.m. and extends to 5 a.m. Duggan told reporters Sunday that the curfew “isn’t intended for Detroiters.”

City officials are hoping the curfew keeps people who don’t live in Detroit from coming into the city instigating violence during the protests. The curfew doesn’t apply to people going and coming home from work. City buses will be operating.

Business owners in Kansas City and Ferguson were assessing damage and cleaning up Sunday after protests over the death of George Floyd in Minneapolis and the general treatment of blacks by police evolved into violence.

Gov. Mike Parson activated the Missouri National Guard on Saturday and the Missouri State Highway Patrol was brought in to help local law enforcement agencies cope with the protests, which were expected to resume later Sunday, at least in Kansas City.

Police blocked access to Kansas City’s trendy Country Club Plaza early Sunday to allow businesses to check out the damage from the protest that started Saturday. About 85 people were arrested and 10 people suffered non-life threatening injuries in Kansas City.

In Ferguson, seven officers were injured by rocks, bottles and fireworks, and several businesses and the Ferguson police headquarters were damaged. Police in both cities used tear gas to disperse crowds.

Chicago Mayor Lori Lighfoot says access to downtown is restricted to only residents and essential workers and the National Guard will have a presence in the city as officials seek to stem violence arising from demonstrations following the police killing of George Floyd.

But she said that in order to protect the city, the state has agreed to dispatch “a contingent of the National Guard” to take up a “limited presence.”

She says bus and train service to the downtown Loop is temporarily suspended. Drawbridges that span several stretches of the Chicago River in and out of the area are raised to limit vehicle access.

And Lightfoot says a citywide 9 p.m. to 6 a.m. curfew will remain in effect indefinitely. Officials say there were 240 arrests Saturday night and early Sunday, and that six people were shot, one fatally, in the Loop during a four-hour span Saturday evening.

LOS ANGELES — Armed National Guard soldiers patrolled the streets of Los Angeles on Sunday as the city began cleaning up after a night of violence that saw demonstrators clash repeatedly with officers, torch police vehicles and pillage businesses.

Fire crews responded to dozens of blazes, and scores of businesses were damaged. One of the hardest-hit areas was around the Grove, a popular high-end outdoor mall west of downtown where hundreds of protesters swarmed the neighborhood, showering police with rocks and other objects and vandalizing shops. One officer suffered a fractured skull, Los Angeles Police Chief Michel Moore said.

Windows were shattered at nearly every shop along a stretch of Melrose Avenue. At Tony K’s Shoe Store, owner Alan Kokozian said his entire product stock was either stolen or damaged.

Kokozian said he was hit in the head with a flying bottle as he pleaded with looters to spare his establishment Saturday evening.

“This was not a political protest. This was basically a bunch of thieves getting together taking advantage of a situation,” Kokozian said Sunday as he surveyed the hole in his roof caused by fire.

Security camera footage showed a swarm of people shattering the front window of DTLA Smoke Shop in downtown Los Angeles early Saturday. Within a minute they had emptied the store’s shelves and fled.

“I’m so angry. I’m so angry. You know, it’s my life, I put everything into it,” owner Natali Mishali told KCAL-TV. “I’m for speaking for human rights. I believe in that. I’m very passionate about that. This is just an excuse to steal.”

For a second night, people in Portland roamed city streets.

Officers said some threw projectiles at them. According to a statement, fireworks and “aerial mortars” were thrown at the Multnomah County Courthouse late Saturday.

In a tweet Sunday morning, Wheeler, Portland’s mayor, wrote: “Agitators are not led by a conviction to change systemic racism. They are opportunists, using the cover of legitimate protests to sow fear in our communities. Don’t let them.”

DENVER — City crews spent Sunday morning scrubbing graffiti off buildings and cleaning streets in a scene playing out across the country after nationwide protests turned turbulent and destructive.

Many of the businesses in downtown Denver boarded up their store fronts, with some covered in graffiti such as “I can’t breathe.” Buildings throughout downtown were scrawled with graffiti with messages like “Kill Cops!” At the top of the Capitol’s West Steps, graffiti on the windows above the three entrances read “Stop Killing Us.”

Police were searching for the person driving the vehicle who they say intentionally struck a police cruiser after the nearby protest had largely broken up in downtown Denver. Two of the injured officers were out of the hospital; all three are expected to recover, Denver police tweeted.

SALT LAKE CITY — In Salt Lake City, where 41 demonstrators were arrested after they set fire to a police car and struck an officer with a bat Saturday night, city officials reflected Sunday morning on the situation facing the nation as crews scrubbed graffiti from buildings and cleaned empty streets.

“We are all hurting from this week and yesterday in particular was heartbreaking for our city and cities across the country, but this is about something much deeper and longer lasting than a protest or a riot,” said Salt Lake City Mayor Erin Mendenhall, a Democratic former city councilwoman who is in her first year as mayor.

“We will recover and we will recover coming together to rebuild policies and to address, unearth, unpack the systemic racism that exists in this city and in every city across this nation.”

Salt Lake City Police Chief Mike Brown said he wants to hear from people how his officers can do better, but said, “We cannot have meaningful conversations in a riotous situation.”

WASHINGTON — George Floyd’s family attorney Ben Crump says he thinks more serious murder charges should be filed against the white Minneapolis police officer who pressed his knee into Floyd’s neck as he begged for air.

Officer Derek Chauvin, 44, was charged last week with third-degree murder and second-degree manslaughter, which are filed in cases of unintentional death. Chauvin also was accused of ignoring another officer who expressed concerns about Floyd, a black man, as he lay handcuffed on the ground.

Crump tells CBS: “We don’t understand how that is not first-degree murder.”

According to the complaint, Chauvin had his knee on Floyd’s neck for eight minutes, including nearly three minutes after he stopped moving and talking.

An autopsy said the combined effects of being restrained, potential intoxicants in Floyd’s system and his underlying health issues, including heart disease, likely contributed to his death.

SEATTLE — Seattle will again have a 5 p.m. city-wide curfew Sunday and police say they arrested at least 27 people during Saturday protests over the killing of George Floyd.

Looters smashed downtown storefronts and at one point Interstate 5 was briefly closed through downtown when demonstrators got onto the roadway. Washington Gov. Jay Inslee is dispatching up to 200 National Guard troops to help maintain order.

PHOENIX — Volunteers are using shovels and brooms to clean up broken glass outside at least five stores at an upscale mall in a Phoenix suburb.

The stores were damaged after a day of peaceful marches turned into a night of sometimes violent protests that included vandalism and an attack on a police station.

Late Saturday, people knelt with their hands up in the streets outside Phoenix police and municipal buildings, chanting, “Hands up, don’t shoot” and “Black lives matter.”

Officers used flash-bang grenades and dispersed the crowd shortly after 10 p.m., telling people it was an unlawful assembly.

In Scottsdale, some people smashed windows at stores including Neiman Marcus and Urban Outfitters, grabbing goods and damaging buildings.

On Sunday morning, TV station video showed large holes punched in some store windows with the glass completely shattered in the front windows of other stores.