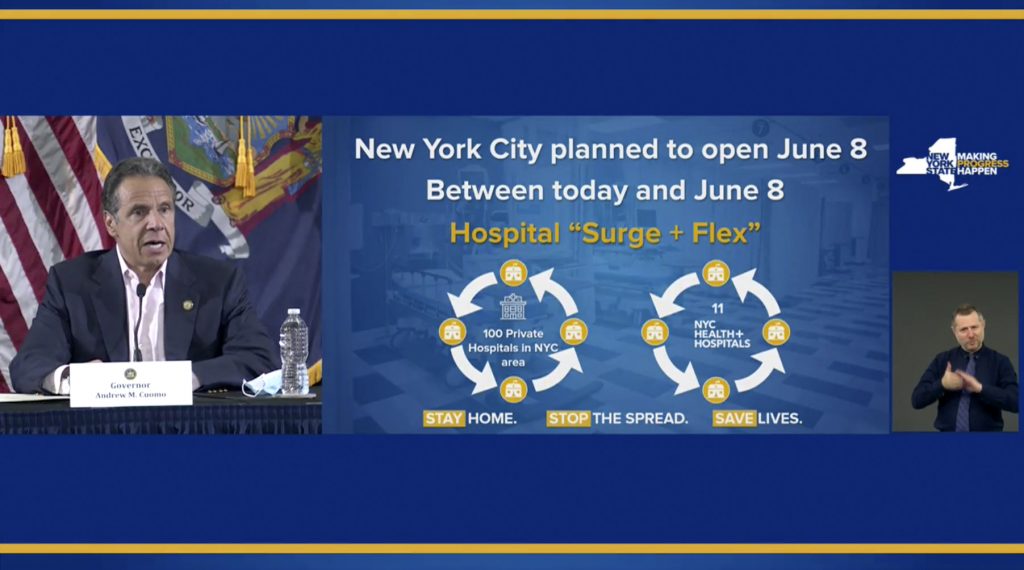 New York City is “on track” to enter phase one of reopening on June 8, New York Governor Cuomo said on Friday as he announced that five upstate regions will now transition to phase two which includes businesses like barber shops and hair salons.

The most populous U.S. city, which has become the epicenter of the country’s coronavirus pandemic, was on track to meet the metrics for a safe reopening, Cuomo said.

“We are on track to open on June 8,” Cuomo told a daily briefing but warned that “reopening does not mean we’re going back to the way things were.”

The first phase of reopening would allow non-essential construction and manufacturing to resume, and non-essential retail stores to offer curbside pick-up.

Cuomo said he expected some 400,000 New Yorkers to be able to return to their workplaces starting June 8, and said the Metropolitan Transportation Authority (MTA) was working on a plan to make the city’s mass transit system safe for commuters.

New York City is the only one of the state’s 10 regions that has not met the seven health benchmarks for reopening set by state authorities.

The Finger Lakes, Mohawk Valley, Southern Tier, North Country and Central New York are the five regions cleared to enter phase two and allow services like barber shops and in-store shopping to resume, with restrictions like 50% occupancy and face coverings.

Cuomo also recommended that professionals in the phase two industries get tested before operations resume.

“That’s not a mandate that’s a recommendation, and we recommend to customers to ask the barber or professional in the hair salon if they had a test before you use their services,” he said.