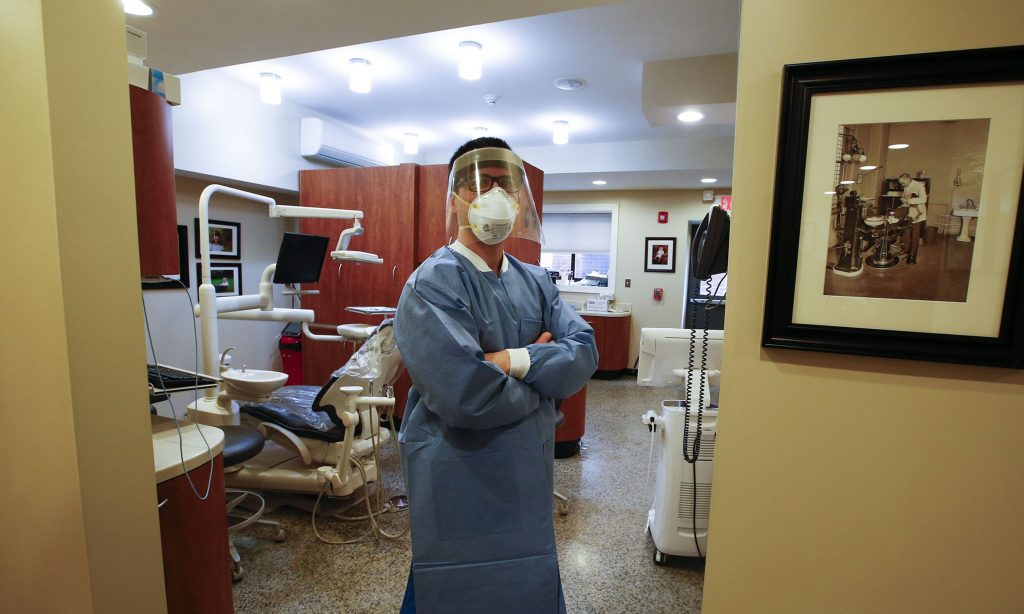 When the dentist’s office called to cancel Laura Lizcano’s appointment for a crown and cavity filling in March because of the coronavirus, she wasn’t terribly worried.

The 25-year-old freelance musician didn’t know at the time that the pandemic would keep medical offices closed for months — and prevent her from getting her teeth taken care of before she lost her health insurance.

Lizcano, who lives in Queen Village, will be dropped from her mother’s insurance plan at the end of May after turning 26, the age limit for children to be covered by a parent.

Now, at a time when she’s lost nearly all her income, Lizcano will pay at least $1,200 out-of-pocket for the procedure.

As dentists resume services put on hold during the pandemic, they face new infection-control requirements that could lead to higher costs — and perhaps less access — for patients. The Pennsylvania Department of Health has said that dental practices must have sufficient personal protective equipment (PPE) for all providers and has urged dentists to avoid procedures that “create a visible spray” of saliva or blood from patients’ mouths unless necessary as part of emergency treatment.

Dentists agree the protections are important in a line of work where faces come close and spit can fly, but they are cash-strapped after two months without any income, and are concerned about how they will cover the new expense. Dental insurance plans may cover part of the cost, dentists could charge a PPE fee directly to patients or raise prices to account for the additional expense.

Dental care is a financial pressure point for families even in good times and any of these approaches will likely lead to high costs for patients at a time when many have lost jobs, income and health insurance.

“It’s understandable there would need to be more precautions,” said Lizcano, who isn’t sure if her dentist will now charge an additional PPE fee, “but why does it have to be me who foots the bill?”

Dentists used masks and protective equipment before the pandemic, but the new guidelines require a bigger investment in more advanced equipment than is usually necessary, such as N95 masks.

“The additional PPE is definitely a significant expense,” said Neil Uffner, owner of Broad Street Braces, whose practice donated many of its masks and gowns to hospitals at the outset of the crisis. “It’s something that we’ve never really had to consider.”

“How this will be covered by patients, either out-of-pocket or through insurance coverage, is a question that needs to be responsibly considered,” said Tom Meyers, a vice president for AHIP.

In the meantime, dental practices eager to resume care and get money flowing again are temporarily absorbing the new infection-control costs.

“We are still operating at a loss through all this,” said Michael Barnes, a dentist in South Philadelphia. “It’s going to be a matter of getting back to some sort of schedule gradually and kind of seeing where all the costs shake out.” Mestichelli Barnes Dental Associates, a family owned practice, received a notice that United Concordia, which offers dental benefits through Independence Blue Cross plans, would reimburse $10 for PPE, but he isn’t sure yet whether that will cover the practice’s entire cost per patient.

Temple University’s dental clinic, which resumed emergency and urgent services the last week of May, has been stocking up on protective equipment and built makeshift rooms within the clinic for patients receiving dental treatments that may splatter water, spit or blood. Routine cleanings are still on hold.

The school even spent $57,000 to buy 30 specialty suction machines designed to reduce spray during dental procedures and reduce aerosolization, which is when saliva particles that could be carrying the virus are broken up into smaller particles that can hang in the air longer and potentially spread more easily.

“I’m just focusing on opening and then we will figure out the cost,” said Amid Ismail, dean of Temple’s Kornberg School of Dentistry.

The cost of investing in safety precautions to get Temple’s dental clinic running again is worthwhile because many patients have few alternatives for dental care and because the clinic accounts for about 16% of the dental school’s revenue, Ismail said.

However, passing on the cost to patients — a majority of whom are covered by Medicaid or uninsured — is “beyond consideration,” Ismail said. If insurance won’t chip in, the dental school is prepared to make cuts in other areas, such as building renovations and faculty travel.

Patient advocates worry that rising dental costs will inevitably fall on families who are already struggling financially during the pandemic.

Two-thirds of Medicare beneficiaries don’t have dental coverage because it is not included in original Medicare, though it is part of some Medicare Advantage plans sold by private insurers, said Melissa Burroughs, a senior oral health campaign manager at Families USA, a national consumer health care advocacy organization.

“More so than any other health care service, dental is the number one service Americans skip due to cost,” Burroughs said. “The way things are changing is likely to exacerbate that.”

Skyrocketing unemployment rates are expected to leave thousands uninsured. While many may qualify for Medicaid, most states require Medicaid to provide full dental coverage for children only. In Pennsylvania, Medicaid plans cover basic services, such as routine cleanings and fillings. More involved services, such as crowns or root canals, are paid out of pocket.

“For years we’ve taken the mouth out of the body and treated it as an ‘other’ kind of disease. We want to see dental health care become part of overall health care,” said Helen Hawkey, executive director of the Pennsylvania Coalition for Oral Health.

Hawkey said she fears the pandemic may move the needle in the wrong direction, potentially further restricting access to care for low-income patients.

The Medicaid managed-care organizations Hawkey’s coalition works which have said they are looking into how to cover dentist fees for infection control. But she worries that even if Medicaid plans agree to cover a portion of the cost, financially-strained practices may decide they can no longer afford to accept the rates negotiated by private insurers and the even lower rates paid by Medicaid plans, and switch to a cash model, taking only patients who can afford to pay higher prices out of pocket. Others could decide against reopening at all.

Beginning June 1, Lizcano will be covered by Medicaid. A few years out of college, she was just starting to feel secure in her freelance career, with several regular teaching and music clinic gigs on her calendar. Now she’s down to a few private voice lessons through video.

Amid the pandemic, she’s grateful to have health insurance, but disappointed she will have to tap into her hard-earned savings in financially lean times if she wants to get her crown and cavity addressed before an infection.

“I have to do it,” she said. “But considering the situation and not having much income coming in, it’s just the additional kick.”