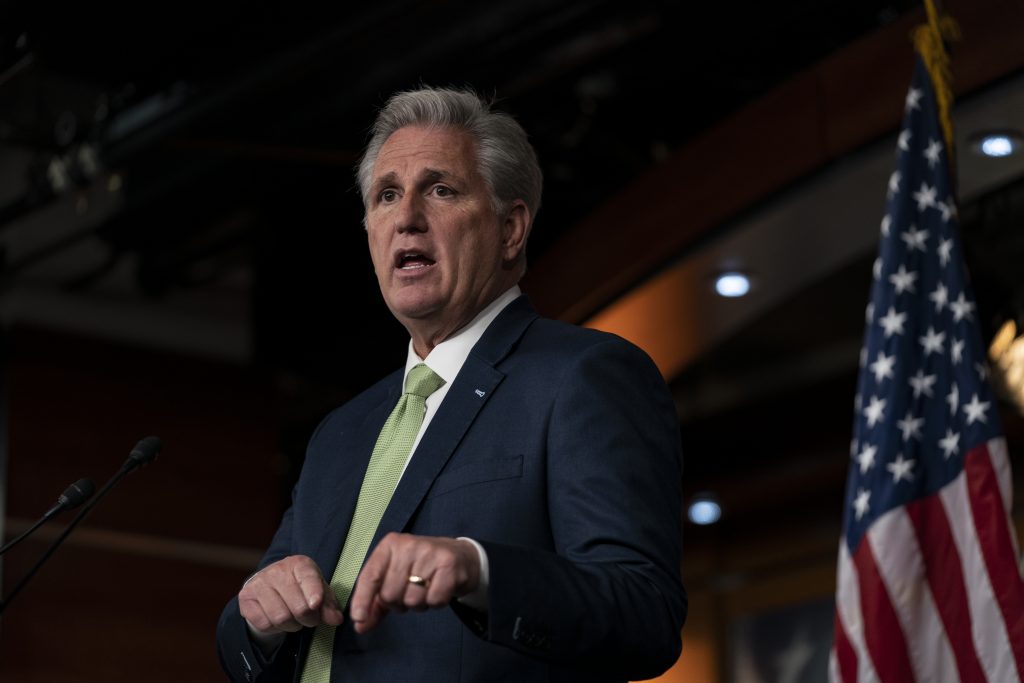 House lawmakers cast the first-ever remote congressional floor votes Wednesday, albeit under a legal cloud after Republican leaders filed a federal lawsuit challenging the constitutionality of the arrangement.

The new system of voting by proxy was pushed forward by House Speaker Nancy Pelosi of California and fellow Democratic leaders this month as a temporary measure, they said, that would allow lawmakers’ full participation during the global coronavirus pandemic, which has made travel and in-person meetings hazardous.

Several Democrats have fretted about the House’s effectiveness as the outbreak has sidelined lawmakers while other parts of the federal government have adapted to the new reality and the Senate, with fewer members, has returned to Washington to vote on nominations and legislation.

Under rules adopted earlier this month, House members designated a colleague to cast floor votes on their behalf during the pandemic while they remain away from the Capitol. One by one, several Democrats, most wearing masks, stood at the microphones Wednesday afternoon and announced how the absent members were voting,

The House overwhelmingly passed the resolution calling for sanctions against Chinese officials for harsh treatment of the Uighur ethnic minority in the Xinjiang region.

During the floor debate, House Majority Leader Steny Hoyer (D-Md.) pushed back against Republican criticism of the remote voting.

“You have magnified form over substance,” Hoyer said. “Our constituents voted for us to vote their interests. And there are many ways we can do that.”

But Republican leaders criticized the change as a breach of 231 years of House custom and, with their lawsuit filed Tuesday, are challenging whether the proxy voting provision is constitutional. The clause in Article I of the Constitution that mandates a majority quorum for the House to do business, they said, implies that such a majority must be present in Washington.

Speaking to reporters Wednesday morning, House Minority Leader Kevin McCarthy (R-Calif.) called the proxy voting system unconstitutional and a “dereliction of duty” by Democrats, while noting that Congress continued to assemble during previous public health crises such as a devastating yellow fever outbreak in 1793 and the flu pandemic of 1918, as well as the Civil War and the attacks of Sept. 11, 2001.

“The Founders believed we should assemble, and we should work just as we’ve done [through] every challenge this country has had,” he said. “It is essential that Congress continues to meet, and that’s why we’ll move forward with the lawsuit.”

Asked about the significance as Democrats pressed ahead with the vote, McCarthy likened it to playing a baseball game under protest.

Pelosi dismissed the lawsuit as a “sad stunt” meant to “delay and obstruct urgently needed action to meet the needs of American workers and families during the coronavirus crisis.”

“The House’s position that remote voting by proxy during a pandemic is fully consistent with the Constitution is supported by expert legal analyses,” she said in a statement Tuesday, calling on Republicans to “stop their dangerous obstruction.”

Hoyer dismissed Republicans’ objections in a teleconference with reporters Tuesday, noting that both chambers — particularly the Senate — have long conducted business and passed bills with as few as two members present in the chamber or even in the vicinity of the Capitol.

The Senate routinely clears bills by unanimous consent, often with one member presiding, the other on the floor to pass the legislation. The House has long used similar procedures to clear noncontroversial bills.

“So, it’s ludicrous, in my opinion, to assert that Member A has to be in a specific physical place to cast their vote on behalf of the American people or at least the 750,000 that they represent,” he said.

As of midday Wednesday, 71 House members — all Democrats, more than a quarter of the House majority — had filed letters with the House clerk announcing their intention to vote by proxy.

About half of the lawmakers represent districts in West Coast states, including 26 from California. Among the rest are some of the House’s oldest members and some — such as Reps. Alcee Hastings (D-Fla.), John Lewis (D-Ga.), and Donald MacEachin (D-Va.) — who have serious health conditions.

The low-tech remote voting system was approved earlier this month on a party-line vote following recommendations from House Rules Committee Chairman Jim McGovern (D-Mass.), who cast it as the most workable remote-voting option that could be quickly rolled out.

Also included in the package of rules changes approved May 15 were provisions allowing for remote committee work, including hearings and meetings to amend and report legislation to the floor.

The private sector, schools, localities and other parts of the federal government have changed to conduct their core functions, with the Supreme Court hearing oral arguments by teleconference for the first time in its history.

McGovern on Tuesday said Republicans were simply “challenging an outcome they don’t like.”

Multiple legal scholars told the Rules Committee last month that the proxy voting system passed constitutional muster, noting that courts have long been reluctant to challenge the legislative branch’s ability to set its own rules.

Those precedents are rooted in a pair of 1892 Supreme Court decisions, in Field v. Clark and United States v. Ballin, in which the court declined to overturn federal laws that were passed under new methods of determining a House quorum.

Writing for the court in the latter case, Justice David Josiah Brewer noted that Article I of the Constitution notes that “each house may determine the rules of its proceedings” and said the courts had no role to intervene so long as congressional rules do not “ignore constitutional restraints or violate fundamental rights.”

“But within these limitations, all matters of method are open to the determination of the house,” Brewer wrote, “and it is no impeachment of the rule to say that some other way would be better, more accurate, or even more just.”

Brewer went on to address ways to determine a quorum, and concluded that the courts had no basis to intervene: “The Constitution has prescribed no method of making this determination, and it is therefore within the competency of the house to prescribe any method which shall be reasonably certain to ascertain the fact.”

The GOP lawsuit, however, argues that the new proxy voting system exceeds the bounds of that ruling by violating a requirement of physical presence that the plaintiffs assert is to be found in other parts of the Constitution.

Several clauses in Article I refer to Congress having to “assemble” and requiring the “attendance” of members to complete a quorum. The lawsuit points to a different line in Brewer’s opinion in Ballin, where he notes that in determining a quorum, “all that the Constitution requires is the presence of a majority, and when that majority are present, the power of the house arises.”