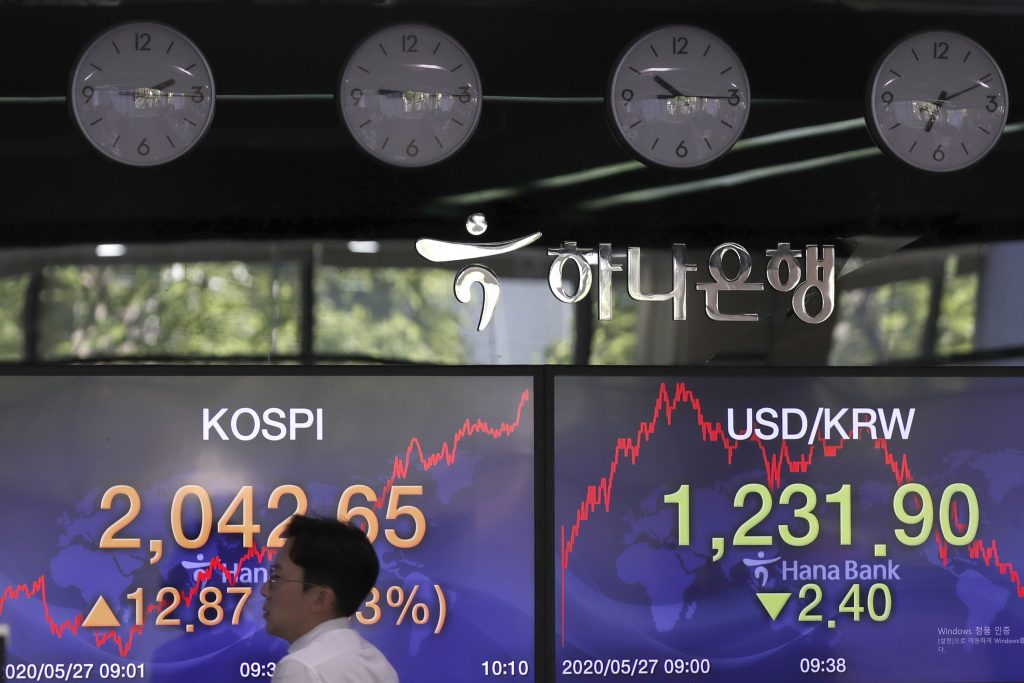 Asian stock markets were mixed Wednesday as U.S.-Chinese tension over Hong Kong competed with optimism about recovery from the coronavirus pandemic.

Benchmarks in Shanghai and Hong Kong retreated after the White House said a proposed national security law might jeopardize the Chinese territory’s status as a global financial center.

Overnight, Wall Street closed at its highest level in nearly three months on hopes the global economy might be recovering from its deepest slump since the 1930s as more countries reopen factories, shops and other businesses.

The law under consideration for Hong Kong by the Chinese legislature has prompted warnings it might erode the independence of courts and other elements that help to make the former British colony a business center.

The legislation would alter Hong Kong’s Basic Law, or mini-constitution, to allow Beijing to compel its government to enact laws. That would circumvent a local legislature that withdrew a proposed security law in 2003 following huge public protests.

Business groups have warned that could hurt confidence in Hong Kong’s legal system and make it harder to attract foreign professionals.

In Washington, President Donald Trump said he was working on a response but declined to give details. Trump is “displeased with China’s efforts and that it’s hard to see how Hong Kong can remain a financial hub if China takes over,” said White House press secretary Kayleigh McEnany. She declined to elaborate.

Financial and industrial stocks accounted for much of the market’s gains. Companies that rely on consumer spending also rose broadly. Airlines were big winners as traders welcomed data showing a pickup in air travel during the long holiday weekend.

Fears of a crushing recession due to the coronavirus sent the S&P 500 into a skid of more than 30% in March. Hopes for a relatively quick rebound and unprecedented moves by the Federal Reserve and Congress to stem the economic pain drove a historic rebound for stocks in April and have bolstered optimism that the market won’t return to the depths seen two months ago.

Fresh optimism about the development of potential vaccines for COVID-19 have also helped lift stocks. Investors are focused on the process of reopening the U.S. economy, which is likely to accelerate over the summer.

The Commerce Department said sales of new U.S. homes inched up 0.6% last month, a surprising gain that hints at the relative health of many consumers. Over the past 12 months, sales are down 6.2%. Meanwhile, the Conference Board said its index of consumer confidence ticked up in May to 86.6 from a reading of 85.7 in April. The index is still down sharply from February’s reading, when it climbed to 130.7.

In another confidence-boosting development on Wall Street, the New York Stock Exchange reopened its trading floor Tuesday for the first time since mid-March, when it closed due to the coronavirus outbreak.

New York Gov. Andrew Cuomo rang the opening bell at the NYSE, which allowed a limited number of traders back to the floor.

In energy markets, benchmark U.S. crude lost 27 cents to $34.08 per barrel in electronic trading on the New York Mercantile Exchange. The contract rose $1.10 on Tuesday to settle at $34.35. Brent crude, used to price international oils, declined 28 cents to $36.46 per barrel in London. It rose 64 cents the previous session to $36.17.