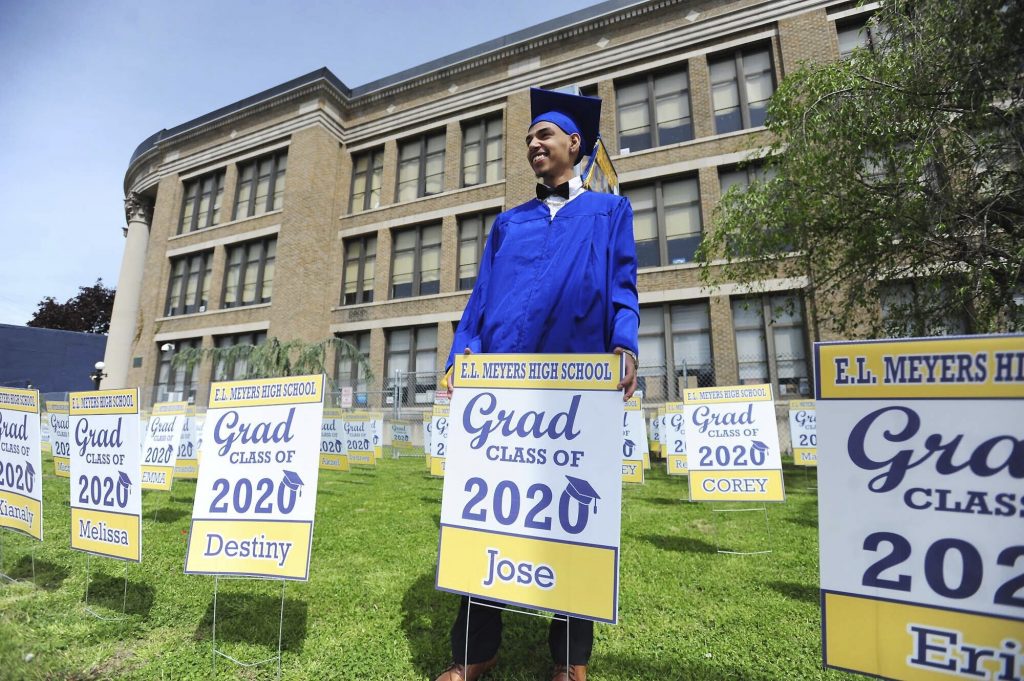 The coronavirus shutdown scrubbed Tom St. John’s blowout birthday party — and the surprise visit from his son, flying in from Korea — weeks before April 8, when St. John turned 80. So daughter Gina Woodard, still hoping for a small surprise instead of a big one, called STL Yard Cards.

The Des Peres, Mo., company showed up the night before the big day to spell out “Happy 80th, Grandpa Tom” in 2-foot-tall blue and black letters on his Affton lawn.

“This is like a stealth operation,” said Woodard, from Kirkwood, who placed a second order the same week to celebrate her son’s 11th birthday. “You just wake up, and they’re magically there.”

Stay-at-home orders and crowd limits have let the air out of birthday parties and school festivities, anniversary celebrations and retirements. In their place, yard signs have sprouted like Zoysia this spring, hailing graduations, family additions, first communions and even funerals. Yard-staking companies, almost always one- or two-person enterprises, have seen their orders increase exponentially, overnight. The pop-up messages have been pushed into a central role in commemorating life events when social distancing precludes other options.

“It’s almost like people are telling their story,” said Bill Gunn, who owns STL Yard Cards with his wife, Brandi.

Yard staking is an ideal side hustle, with flexible hours and minimal overhead. The signs are their own best advertisements: Folks pass by, or see a social media post, and a light bulb goes off.

It’s not magic, though. The evening rush involves order forms and inventory tracking, mapped-out routes of pickups and drop-offs, and minivans jammed with corrugated plastic letters. Celebratory messages, which cost about $75, are set up under the camouflage of nightfall and dismantled 24 hours later.

The Gunns, both teachers in the Kirkwood School District, started STL Yard Cards in 2017 out of their Des Peres home after noticing the popularity of lawn greetings in Texas, where they have family. Three of the largest national yard-card companies — Sign Gypsies, Sign Dreamers and Card My Yard — are based out of the Lone Star State.

The couple wanted a project their three teenagers could be involved in. Prior to this spring, STL Yard Cards had been turning over one or two lawns a night. Their high is now 18. They shrunk their service area to a 15-mile radius to keep on top of orders, and Bill Gunn hired some of his high school students to help out. By mid-May, they had sold out the rest of the month, plus eight days into June.

“It’s turned from a hobby into a job,” said Bill Gunn. “We’re going to end up not having a garage any longer.”

Karen Hohlen of Chesterfield has already given hers over to the hundreds of letters, logos and emojis she has accrued for Sign Me St. Louis, which she started 14 years ago after having her first child.

Baby-bearing storks were her original focus, then birthday milestones took over: cupcake signs for sweet 16, “cheers, beers and many more years” for 21-year-olds, and a “holy cow” bovine stampede for 40.

And business has grown tenfold. She used to field calls whenever they came in, but has had to set up designated hours for the first time.

“I was just getting completely overwhelmed,” she said. “It’s a true family business now that COVID has hit. My two teenagers have been [initiated] by fire.”

Hohlen anticipates a slowdown as venues start to re-open, but she thinks she will stay busier than her pre-lockdown levels. “People know about us now,” she said. And parents, she added, feel like once they get a custom greeting for one birthday, all their kids need one.

Amy Strong’s Grounded Greetings has been decorating twice as many yards in a week as it used to in a month.

The Waterloo business was even tapped to decorate for a drive-through memorial service at the Monroe County Fairgrounds, planting a “rest in peace” message at the beginning and a “thank you” at the end.

Most of Strong’s signs denote happier events. Kara Taylor called Grounded Greetings when it became obvious her daughter’s college graduation would not be the experience she had imagined.

The Southern Illinois University Edwardsville online ceremony was nice, but not quite enough to properly mark the occasion.

Big enough to see from the street. Last week, Madison Taylor woke up to “Congrats, Maddie!” in front of her Belleville home. Balloons, stars and mortarboards framed the black-and-red message.

Her mom kept the signs an extra day, to maximize the drive-by honks and front-yard photo ops.