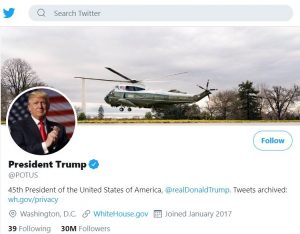 Twitter on Tuesday slapped a fact-check label on President Donald Trump’s tweets for the first time, a response to long-standing criticism that the company is too hands-off when it comes to policing misinformation and falsehoods from world leaders.

The move, which escalates tensions between Washington and Silicon Valley in an election year, was made in response to two Trump tweets over the past 24 hours. The tweets falsely claimed that mail-in ballots are fraudulent. Twitter’s label says, “Get the facts about mail-in ballots,” and redirects users to news articles about Trump’s unsubstantiated claim.

Twitter’s actions come on a day when Twitter was facing a barrage of criticism over another set of Trump tweets. Earlier on Tuesday the widower of a former staffer to Joe Scarborough asked Twitter chief executive officer Jack Dorsey to delete tweets by Trump furthering a baseless conspiracy theory.

For its 14-year existence, Twitter has allowed misinformation by world leaders and everyday citizens to spread virtually unchecked. Its leaders have long said that the platform’s users would engage in debate on the platform and correct false information on their own.

Twitter has radically changed its approach during the pandemic. In March, the company revised its terms of service to say that it would remove posts by anyone, even world leaders, if such posts went “against guidance from authoritative sources of global and public health information.” That includes comments claiming that social distancing is ineffective or essential oils can be used to cure the disease, for example.

Soon after, for the first time, Twitter applied the policy to world leaders, removing tweets by Brazilian president Jair Bolsonaro and Venezulan President Nicolas Maduro, arguing that the tweets about breaking social distancing orders and touting false cures had such potential for harm that labeling them would be insufficient.

Then earlier this month, Twitter rolled out a new policy saying that it would label or provide warning messages about covid-related misinformation, even when that information is not a direct contradiction of health authorities and does not directly violate the company’s policies. The company said at the time that it may expand the labels to other issue areas, such as other types of health-related hoaxes or other situations where there is a risk of harm. Tuesday’s tweets on elections represent an expansion into a new area of election-related misinformation.