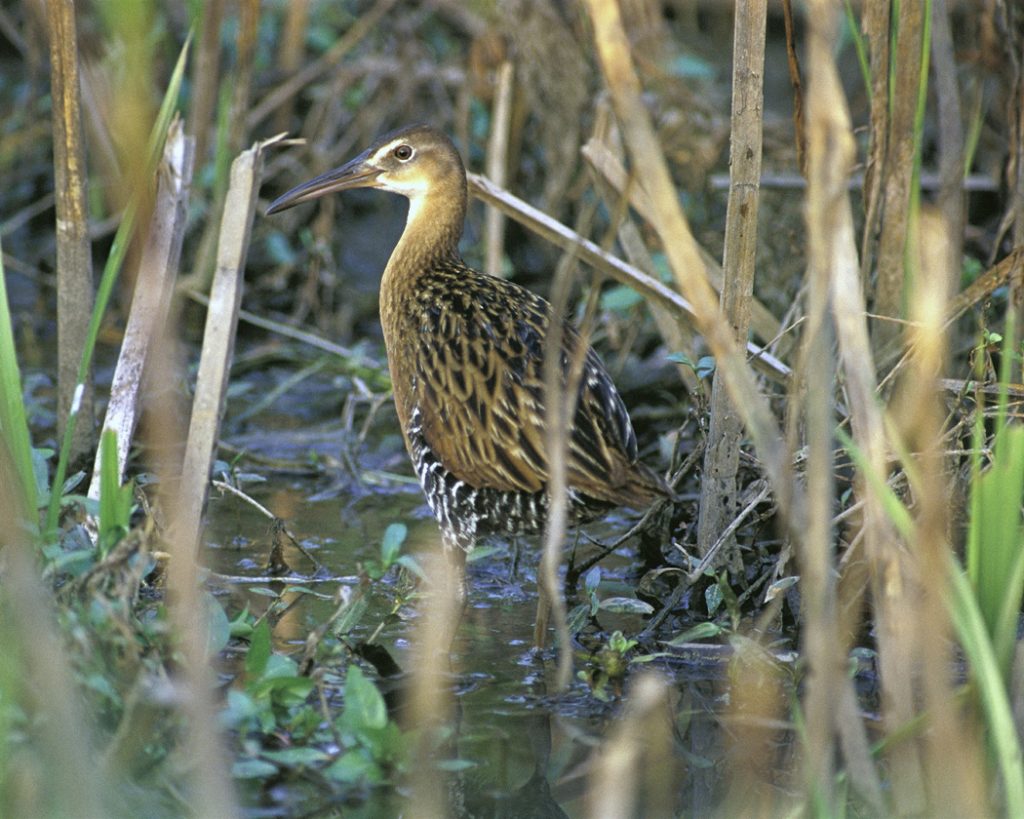 In Currituck County marshes there lives the king rail, a secretive and declining marsh bird that is a prized sighting among birders.

Now — during this season — is the best time to see and hear them.

Hundreds of the chicken-sized birds with long thin beaks flourish in Mackay Island National Wildlife Refuge south of Virginia Beach. It’s fresh water marshes along the Currituck Sound cover more than half of the refuge’s 8,219 acres and provide one of the best king rail habitats on the East Coast.

King rails are not endangered nationally, but are rare in inland states where they once were numerous.

“That’s the best place around to see a king rail,” said Susan McRae, ornithologist and biology professor at East Carolina University. “We know the population there is very genetically diverse and very healthy.”

The bird even has its own billboard along N.C. 168, so tourists returning from the Outer Banks can see that Currituck County offers a home for the prized bird, said Tameron Kugler, director of Currituck County Travel and Tourism.

“We felt it was something we wanted to do,” she said.

The refuge saw a spike in birders after the billboard went up two years ago, said Mike Hoff, manager of Mackay Island National Wildlife Refuge.

“They are very vocal, so you hear them all the time,” Hoff said. “You slam your car door and they’ll respond. They let you know when you disturb them.”

Despite the coronavirus, trails remain open. Officials, however, caution birders to keep a proper distance.

The birds, with brown feathers and dark stripes, blend into their environment as they forage through the grasses. Their call sounds like a hammer repeatedly striking a nail echoing over the marsh.

King rail populations have declined by 86 percent since 1970, according to a study published last year in Science magazine and a report by the American Bird Conservancy.

Food sources and marsh habitats have been lost to development, wrote Howard Youth for the American Bird Conservancy. Most of the remaining habitats are in wildlife refuges.

McRae and her students have observed, photographed and tagged king rails at the refuge for 10 years.

They found that the five-inch long red swamp crayfish is plentiful and is a meaty favorite of the bird. The large invasive crayfish has overtaken the native crayfish, but it is bigger, reproduces prolifically and peaks in numbers around when the rails need to feed their young.

“From the king rail’s perspective, it’s great,” she said.

Hoff burns the marsh on three-year cycles, allowing a variety of marsh plants to grow and the habitat to improve, he said.

While the king rail is known as a loner, researchers have discovered that the bird likes to nest within a hundred yards or so of others of its kind. Researchers also have found that females king rails sometimes lay eggs in another female’s nest.

McRae is studying whether individual females can be identified by the pattern of coloration on her eggs.

This season, they plan to place cameras along trails and near nests to further learn the secrets of the king rail.