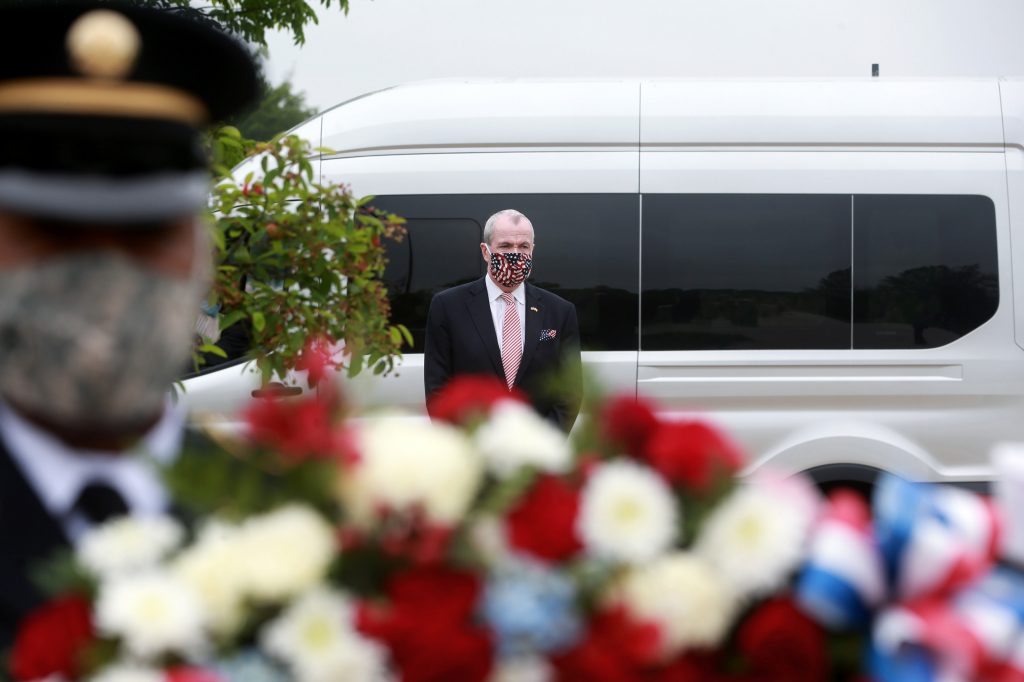 State and military officials gathered on Monday to honor those who made the ultimate sacrifice in a memorial service unlike any in recent memory.

“This is a solemn day. A day to remember our hallowed and fallen dead. A day to remember those who gave to this nation their full measure,” Murphy said. “And today we also remember many honored veterans who survived wars, only to die at the hands of COVID-19.”

The holiday ceremony came as the United States nears 100,000 deaths from coronavirus. New Jersey has been gravely impacted with 11,144 deaths, including 16 announced on Monday. The state also saw another 965 confirmed cases Monday, bringing its total cases to 155,092.

The governor, along with Brigadier General Jemal J. Beale, addressed a socially distanced crowd gathered Monday on the lawn across from the cemetery’s chapel. Thousands upon thousands of American flags were planted across the cemetery’s 236 acres. Everyone wore masks.

The service, which was held amid the “painful reality” of the COVID-19 pandemic, according to Beale, was as somber as the overcast sky.

Officials noted, however, that during these challenging times it was as important as ever to honor those who died serving the United States.

“This Memorial Day is unlike any other in our lifetime. Although COVID-19 has changed the way we do business and live our daily lives, it has not and will not stop us from taking the pause to remember the brave men and women who died on fields of battle on nearly every continent,” Beale said.

The unit will be deploying to the Middle East in June to support Operation Inherent Resolve. Martinez and Hicks were presented with the New Jersey flag to fly over their base during deployment.

In his closing remarks, Murphy recited a verse from English poet Laurence Binyon’s “For the Fallen,” written at the outbreak of World War I.

“They shall grow not old, as we that are left grow old. Age shall not weary them, nor the years condemn. At the going down of the sun and in the morning, we will remember them,” Murphy recited.

“I thank you all for continuing this annual tradition. In spite of the most challenging of times, we need this day,” the governor added.

Following the governor’s remarks, a moment of silence was held.

The moment of silence ended with a “Jersey strong,” from Beale, and Taps closed out the service.