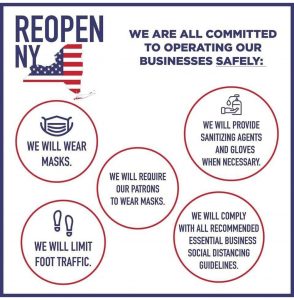 It began as a relatively small movement of small business owners demanding that Governor Cuomo treat them fairly and allow them to open their businesses in a safe fashion. In an impassioned statement conveyed on a video which began on social media and was seen by thousands of people, these desperate business owners raised a valid point: The large department stores, which marketed some items which were deemed essential, were allowed to open and sell all their products, while the small business owners were forced to remain shuttered, and watch the establishments, which they spent years building up and which they rely on to support their families, teeter on the verge of bankruptcy.

Sarah Brafman, owner of Gymies Gym, spoke about how when the coronavirus originally hit the city, it was understandable that we had to close down in order to flatten the curve. “Now, we have flattened the curve. The devastation happening now for small businesses is avoidable and we must open our doors,” she said. “It’s time to safely and responsibly reopen our city in a way that mitigates risk, but also in a way that does not leave devastation in its wake.”

“Our businesses are essential to our families, and to our communities,” Simcha Minkowitz, the owner of a jewelry store in Boro Park stated. “We pledge to keep our stores sanitized. We will follow whatever reasonable guidelines need to be put in place.”

Isaac Bernstein, a chef at a restaurant which was forced to close, asserted that he can have 10 feet between each table. “Why can’t I open?” he asked. “All over the world restaurants are open, but no one is giving us a chance. It’s not just restaurants, it’s everybody. It’s time to reopen safely, but it’s time to just reopen!”

Ron Coleman, counsel for Reopen New York, decried the fact that the storeowners were being denied basic human rights. “We are talking about a basic, fundamental human right; everyone is entitled to make a living,” he said emphatically.

On Sunday, May 24, many stores across the city opened their doors in an act of civil disobedience, in an attempt to highlight the need for the reopening of the small retail businesses. As lines formed in front of the stores, the proprietors showed extra caution to limit the amount of people allowed in the store at any given time, and the customers, respectful of this, waited patiently for their turn to arrive. Many stores displayed the Reopen New York signs in their window to show their solidarity with the hard hit retailers as they valiantly tried to keep their businesses afloat.

“The large corporate department stores like Target and Walmart, while being allowed to open to sell food, sanitizing supplies and the like, are also permitted to sell toys, clothing and a whole host of other items,” a customer said while waiting patiently. “As a resident of the community, we want to show our solidarity with our local shops. It’s far easier, as you can see, for these small stores to control the crowd and to keep the place sanitized. So, I although the authorities are attempting to stop it, I will wait my turn and make my purchases here, because I feel supporting them is the moral thing to do.”