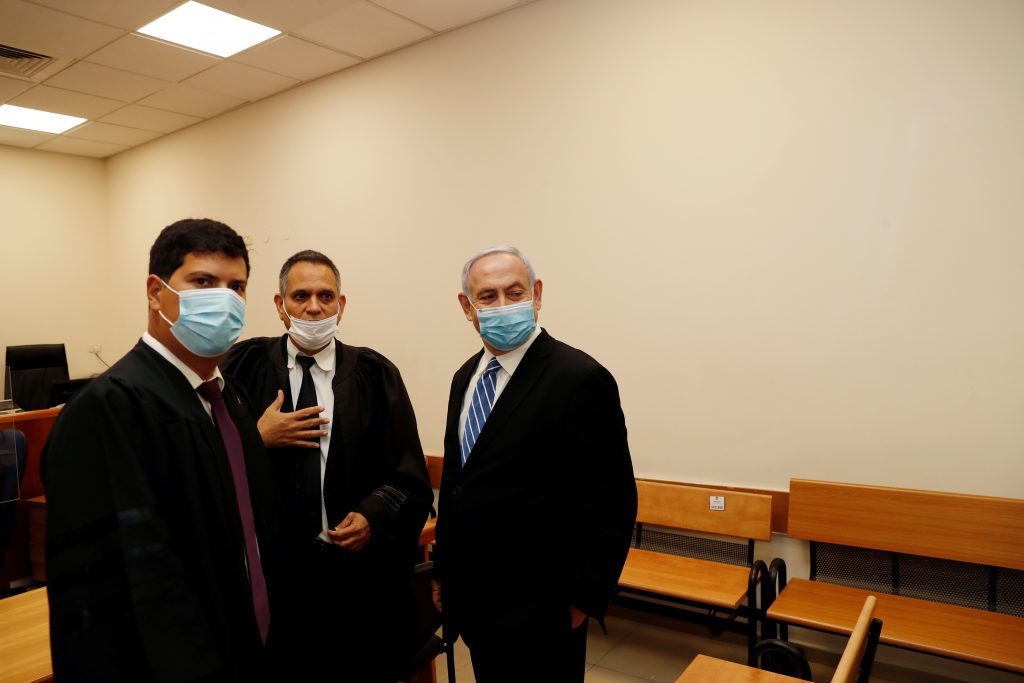 History was made Sunday at 3 p.m., as for the first time in Israel, a sitting prime minister appeared in court. At long last, the trial of Prime Minister Binyamin Netanyahu finally opened.

Additional defendants in the case are Yediot Acharonot publisher Arnon Mozes, and controlling shareholder in the Bezeq corporation Shaul Elovitch, as well as Iris Elovitch.

Sunday’s hearing was mainly technical and lasted under an hour, with the arraignment of the prime minister.

The second court hearing in Netanyahu’s trial is scheduled for July 19.

A panel of three judges will preside over the trial: Rivka Friedman-Feldman, who is serving as head of the panel; Moshe Bar Am, and Oded Shacham.

The trial was supposed to begin on March 17 – two weeks after the elections – but the coronavirus outbreak caused it to be postponed.

Last week Netanyahu had asked the Yerushalayim District Court to be excused from his arraignment, deeming the event a formality and arguing that bringing his bodyguards would be a waste of public funds and a strain on coronavirus rules against congregations. The court denied his request.

However, at the end of the opening session, deputy state attorney Liat Ben Ari said she does not have an issue with the defendants not being present at the next session on preliminary requests.

Netanyahu will appear in court only when his testimony is necessary or to be present for cross-examination.

The second stage of the trial, Yisrael Hayom says, is expected to last several months, and will include preliminary arguments by the defense, which will have 60 days to present its arguments. The prosecution will then have 60 days to respond. Only then will a date be determined for the court to deliberate and deliver a ruling.

CASE 1000, in which Netanyahu has been charged with fraud and breach of trust, centers on allegations that he and wife wrongfully received almost 700,000 shekels ($200,000) worth of gifts from Arnon Milchan, a documentary producer and Israeli citizen, and Australian billionaire businessman James Packer.

Prosecutors said gifts included champagne and cigars and that Netanyahu helped Milchan with his business interests. Neither Packer nor Milchan face charges.

CASE 2000 alleges that Netanyahu negotiated a deal with Arnon Mozes, owner of Yediot Acharonot, for better coverage. In return, the prime minister allegedly offered legislation that would slow the growth of Yisrael Hayom, a rival newspaper. Netanyahu has been charged with fraud and breach of trust. Mozes has been charged with offering a bribe, and denies wrongdoing.

In return, prosecutors say, he sought positive coverage of himself and his wife on a news website controlled by the company’s former chairman, Shaul Elovitch.

The prosecution wants the court to meet three to four times a week on the Netanyahu cases, but Netanyahu’s associates want to limit the number of hearings to one per week.

In the third, and main, stage of the trial, when evidence is presented, a total of 333 witnesses are on the roster to appear for the prosecution and the state.

In an optional fourth stage, Netanyahu can claim that there is no need of responding to the evidence presented as they have no bearing on the accusations against him, but there is little chance of this happening.

The fifth stage of the trial allows every defendant to present witnesses on his behalf and make their own arguments.

The sixth stage of the trial is devoted to summations.

The seventh stage of the trial is the ruling, in which the judges will determine on which – if any – of the counts they have found Netanyahu guilty. If he is not exonerated, he will then be sentenced.

The trial process is expected to take some three years, not including appeals.

Netanyahu could also seek a plea deal rather than go through the trial process.