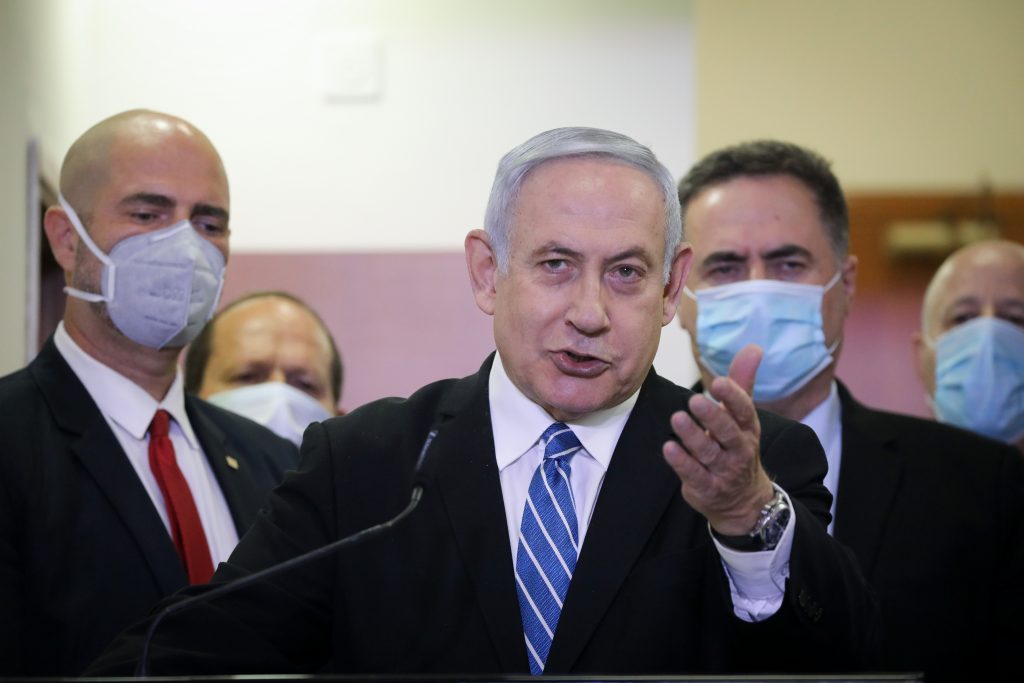 Prime Minister Binyamin Netanyahu professed his innocence at the start of his corruption trial on Sunday, saying he was being framed but “standing tall” in the first criminal prosecution of a serving Israeli prime minister.

Flanked by a clutch of Cabinet ministers from his Likud Party, and speaking forcefully, Netanyahu appealed to public opinion, addressing the media cameras in the courthouse hallway before taking his seat on the defendants’ bench.

“These investigations were tainted and stitched-up from the first moment,” Netanyahu said about charges of bribery, breach of trust and fraud at the center of three graft cases against him.

Outside the courthouse, and separated by metal barriers and police, hundreds of his supporters and opponents held noisy demonstrations. Chants of “Bibi, king of Israel” from Netanyahu faithful using his nickname echoed through the court building.

Netanyahu was indicted in November in cases involving gifts from millionaire friends and for allegedly seeking regulatory favors for media tycoons in return for favorable coverage.

He drove in a motorcade to court after attending the first working session of his new Cabinet.

In his hallway appearance, Netanyahu dubbed prosecutors and police the “Just Not Bibi Gang,” reasserting that he was a victim of a political witch-hunt abetted by the left-wing media to drive him from office.

“I am appearing here today, as your prime minister, standing tall and with head high,” Netanyahu said, vowing to beat the charges and continue to lead Israel in his current fifth term.

“The objective is to depose a strong, right-wing prime minister, and thus remove the nationalist camp from the leadership of the country for many years,” he said.

He said police and prosecutors had conspired to “tailor” a case against him, and said the evidence was “contaminated” and exaggerated. He called for the court proceedings to be broadcast live to ensure “full transparency.”

“While the media continues to deal with nonsense, with these false, trumped up cases, I will continue to lead the State of Israel and deal with issues that really matter to you,” he said, including to resuscitate the economy, and “continue to save the lives of thousands of Israelis ahead of the possibility of a second wave of coronavirus.”

Across town, several hundred anti-Netanyahu demonstrators gathered outside his residence wearing face masks and shirts with the words “crime minister” and bearing posters calling for his resignation. They faced off across police barricades with the prime minister’s backers.

Several of Netanyahu’s Likud ministers, including the newly appointed internal security minister who oversees the police, came to the court to back him.

“Crime Minister,” countered a banner draped over a barrier in the other camp’s protest area.

In the courtroom, one of the judges asked Netanyahu whether he had read and understood the indictment.

The prime minister then stood up and replied: “Yes, your honor.”

Netanyahu refused to take his seat on the defendant’s bench until the press was ushered out of the room.

Ahead of the start of the trial, Defense Minister Benny Gantz, Netanyahu’s coalition partner, said the prime minister is “innocent until proven guilty.”

“Like every citizen, the prime minister also has the presumption of innocence and I am certain the legal system will carry out a just trial,” he wrote on Twitter. “I would like to emphasize that my colleagues and I have full faith in the legal system and law enforcement. At this time, more than ever, as a state and a society, we must seek unity and reconciliation, for the sake of the State of Israel and its people.”

As the trial began, Netanyahu’s attorney Micha Fetman told the judges that he requires a few more months to go over the scope of the case, as the exact makeup of the defense team in the various cases has yet to be finalized.

Deputy State Attorney Liat Ben Ari dismissed the request for extra time to go over the evidence before moving forward with the trial. “If we had started today I would say we need three to four months, but this case was not born today. On February 28, 2019, the attorney general decided to file an indictment subject to the hearing. Since then, a year and four months have passed,” Ben Ari said.

The prime minister’s lawyer also requested that the judge not demand the presence of the defendants at future hearings of the case.

“It would be fitting to make this allowance,” Fetman said. “I think that this would limit the media circus and allow us to focus on what’s relevant.”

Ben Ari agreed that she does not have an issue with the defendants not being present at the next session on preliminary requests.

Lead Judge Rivka Friedman-Feldman said that the court will notify the sides regarding the date of the next hearing.