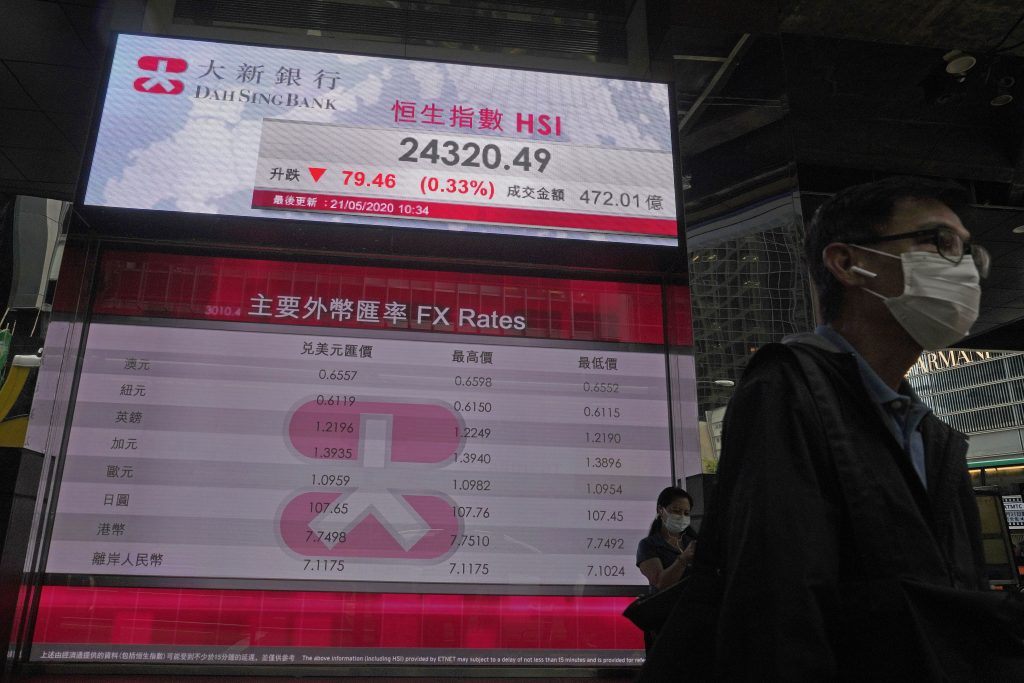 U.S. stock indexes veered broadly lower in afternoon trading Thursday, giving back some of their gains after a solid rally a day earlier.

The S&P 500 was down 0.6% in choppy trading as investors weighed more dismal news about the economic fallout from the coronavirus epidemic and the latest buildup of tensions between the U.S. and China. Bond yields were mixed. Oil prices rose.

The Labor Department said more than 2.4 million people applied for U.S. unemployment benefits last week in the latest wave of layoffs from the outbreak. That brings the running total of Americans who have lost their jobs in the two months since the coronavirus led to a near shutdown of the economy to 38.6 million.

Meanwhile, investors had an eye on the latest flareup in tensions between Washington and Beijing. The White House issued a report attacking China’s economic and military policies, and its human rights violations. The report expands on President Donald Trump’s get-tough rhetoric that he hopes will resonate with voters angry about China’s handling of the disease outbreak.

Technology and health care stocks took some of the heaviest losses. Only industrial sector companies held onto gains. Homebuilders were broadly higher.

“It really looks like a little bit of weakness ahead of the long holiday weekend,” said Ryan Detrick, senior market strategist for LPL Financial. U.S. markets will be closed Monday for Memorial Day.

Wall Street is on track to recoup its losses from last week amid fresh hopes for a U.S. economic recovery in the second half of the year and optimism about a potential vaccine for COVID-19. A strong rally on Monday reversed all of the market’s losses for the month. The index is still down about 11.5% from its all-time high in February.

Investors are betting that the economy and corporate profits will begin to recover from the coronavirus pandemic as the U.S. and countries around the world slowly open up again. However, concerns remain that the relaxing of stay-at-home mandates and the reopening of businesses could lead to another surge in infections, potentially ushering in another wave of shutdowns.

“Clearly we’re all going to be anticipating how things slowly start to open up to see exactly what happens with cases over the next several weeks,” Detrick said.

The National Association of Realtors said sales of previously occupied U.S. homes plunged 17.8% in April as the housing market remained hobbled by the coronavirus shutdowns. The downbeat report didn’t hurt homebuilder stocks, which climbed broadly. The pullback in sales came as the inventory of properties on the market fell to a record low last month. A drop in homes for sale favors builders because it represents less competition. Meanwhile, Freddie Mac said mortgage rates eased this week, another favorable trend for builders. KB Home led the sector, gaining 6.6%.

Crude oil started the year at about $60 a barrel, but plummeted earlier this year as demand sank due to widespread travel and business shutdowns related to the coronavirus. The price has risen this month as oil producing nations cut back on output and the gradual reopening of economies around the globe have driven up demand.

Bonds yields were mixed. The yield on the 10-year Treasury note, a benchmark for interest rates on many consumer loans, fell to 0.67% from 0.68% late Wednesday.