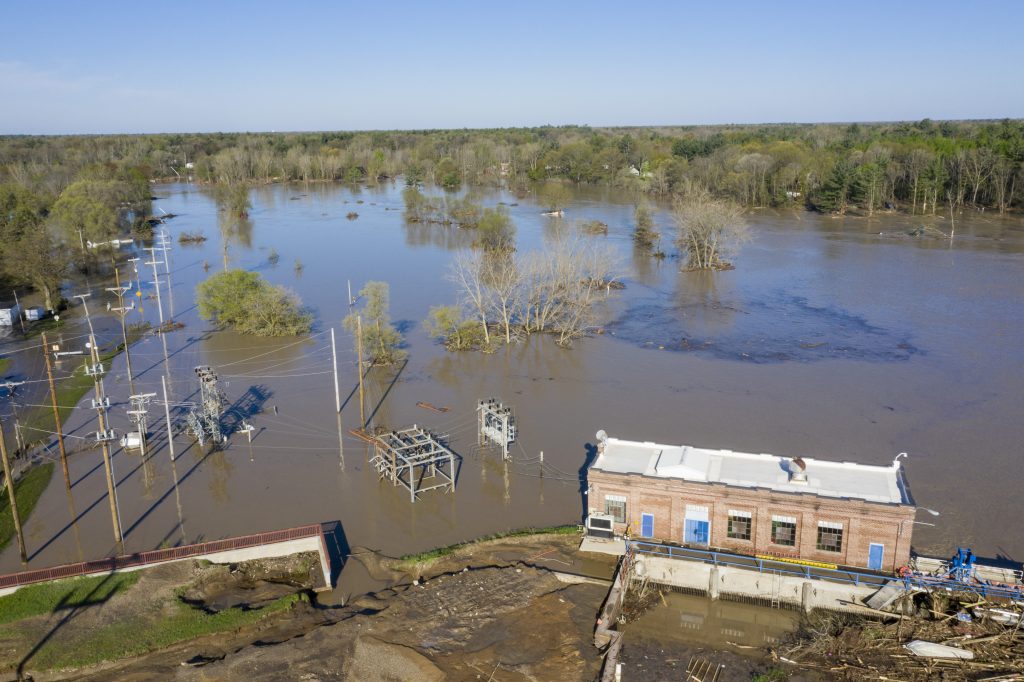 Many Central Michigan residents remained cut off from their homes Thursday even as floodwaters receded, with senior citizens among the scores of displaced people staying in shelters after flooding overwhelmed two dams, submerged homes and washed out roads.

President Donald Trump, who was in Michigan to visit a Ford production plant, signed an emergency declaration authorizing the Department of Homeland Security and the Federal Emergency Management Agency to coordinate disaster relief efforts.

At Midland High School, 90% of people who slept in the school’s gym were senior citizens, said shelter coordinator Jerry Wasserman. He said extra precautions were in place due to the combination of the guests’ ages and the coronavirus pandemic.

“We had to deal with COVID and then deal with their angst of what’s happened to their house and their pets and all this” Wasserman said Thursday.

In Midland, 61 people spent Wednesday night and Thursday morning in temporary shelters, according to city spokeswoman Selina Tisdale. That number — mostly the elderly and families — dwindled throughout Thursday as floodwaters receded and some residents were able to return home, she said.

Dan Roberts, who was a Midland High student more than a half-century ago, spent a few nights at the shelter and said “anyone else who had a place to go went to elsewhere.” He planned to go stay with his sister in the Flint area.

“They’ve been watching after us carefully. It’s been a little hectic, but I would not complain at all,” said Roberts, a 70-year-old who lives at the Riverside Place senior living community that was overcome with floodwater.

Much of the area remained underwater, including in Midland, the headquarters of Dow Chemical Co. And floodwaters continued to threaten downstream communities.

It could be days before the full scope of damage can be assessed, officials said. No flood-related deaths or injuries have been reported.

“The damage is truly devastating to see how high the water levels are, to see roofs barely visible in parts of Midland, and to see a lake that has been drained in another part,” said Gov. Gretchen Whitmer, who toured Midland County on Wednesday.

The floodwaters mixed with containment ponds at a Dow Chemical Co. plant and could displace sediment from a downstream Superfund site, though the company said there was no risk to people or the environment.

Wasserman said the uncertainty among those staying at the shelter is “pretty heavy,” but he’s heartened by the outpouring of support from the community.

“This community just absolutely responded. Overwhelming response,” Wasserman said. “And my hat’s off to Midland.”

Other area residents returned to their homes to find heavy damage. And around Wixom Lake in Midland County’s Hope Township, which lost most of its water when the Edenville Dam failed, residents wondered Thursday when, or if, it will be refilled.

“I’m sick about it. You know, I mean, it’s just sickening,” said resident Glenn Hart, 66, who surveyed the lake with his grandson.

“Usually, that’s 21 feet deep out there in the cut,” Hart said, pointing from his backyard to the muddy ground that used to be the lake bottom. “Good fishing area. Well, there’s no fish now. And we don’t know when we’ll get water again.”

Mark Musselman’s home is a total loss. He planned to fly to Florida later Thursday, then drive his motor home back, set it up in the driveway and oversee the tearing down of his house.

“Well, everything’s destroyed pretty much,” Musselman said. “You know, we had no way of knowing. We had plenty of time. We could have got everything out.

“But we just thought that, you know, it was just going to come up. It wouldn’t be any big deal,” he said.

The nearly century-old Edenville Dam has been the target of lengthy investigations by federal regulators, who revoked the facility’s license two years ago due to non-compliance issues that included spillway capacity and the inability to handle the most severe flood reasonably possible. That year, the state rated the dam, built in 1924, in unsatisfactory condition.

Officials have said the Sanford Dam, built in 1925, was overflowing but the extent of structural damage isn’t yet known. It most recently received a fair condition rating.

Both are in the process of being sold.

Whitmer said Wednesday that the state would investigate the operators of the dams and “pursue every line of legal recourse we have.”

Midland City Manager Brad Kaye said it was fortunate that the Tittabawassee River crested at just over 35 feet, about 3 feet below the forecast level.

Kaye warned that it could take four or five days for the floodwaters to recede, and asked residents to use caution when traveling or returning to their homes.

“Don’t rush out thinking that you can just rush back to your homes, because the water is still there … this is not over,” Kaye said.

The National Weather Service said communities farther downstream should brace for flooding in the coming days. A flood warning was in effect Thursday along the Tittabawassee River from Midland downstream into Saginaw, and flooding in that area was possible through the weekend.

The flooding washed away some roadways, and left others impassable. Tisdale said roads must be inspected for damage that could make traveling hazardous.

“We’re working to get information to folks on when they can return to their houses, but stress that a lot of infrastructure gets compromised,” Tisdale said.