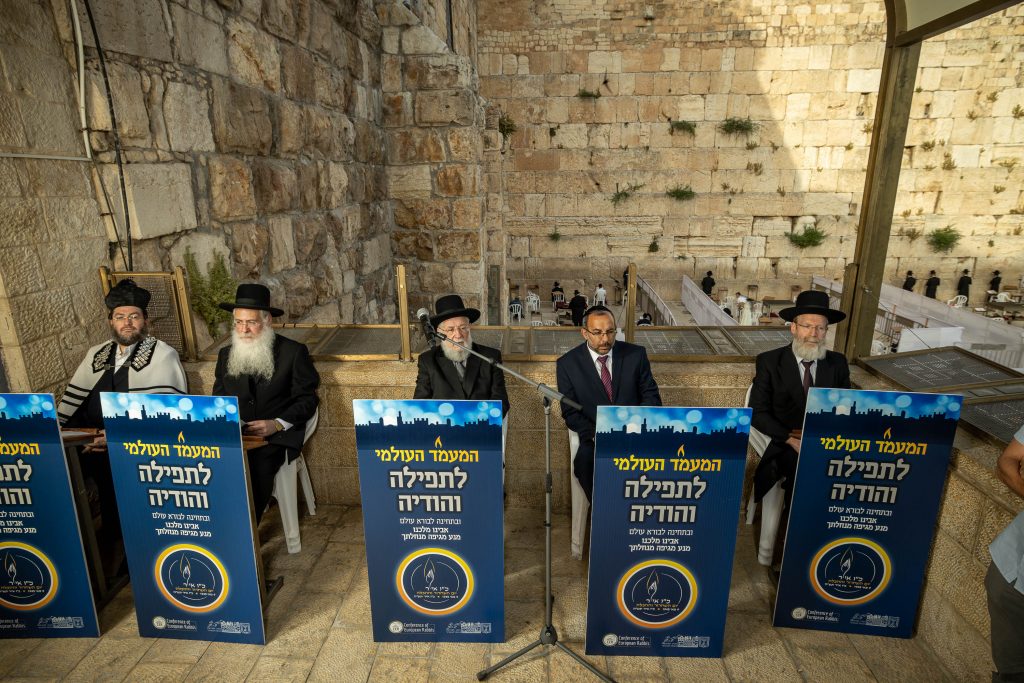 The Day of Salvation and Liberation of European Jews from the Nazis (26 Iyar) established in honor of the surrender of Nazi Germany and the liberation of European Jewry, as well as in memory of the soldiers who fell in the fight against the Nazis, has been celebrated for the seventh time in Israel and around the world under the guidance of the Council of Rabbis of Europe.

By tradition, commemorative events dedicated to the Day of Salvation and Liberation began with a collective prayer at the Kosel, which was led by the Chief Rabbi of Tel Aviv Harav Yisrael Meir Lau, who also told his own story. Other Rabbanim, the Israeli ambassadors to the U.N. and Russia and the heads of Jewish organizations around the world also took part in the event. The prayer participants thanked Hashem, “who saved us from the hands of the enemy.”

Earlier that morning, Rabbi Haim Corsia held a prayer marking the “Day of Liberation and Rescue” with the participation of about 100 French Rabbis.

The ceremony at the Kosel was opened by Harav Yisrael Meir Lau, who thanked Hashem for saving us, and blessed the initiative of Mr. German Zakharyayev to celebrate the miracle of salvation. “Even after 75 years I remember well how I was rescued in the Buchenwald camp. And I want the world to remember and understand. About 80 years ago the world was divided into four groups. The first one were humiliated killers and collaborators with the Nazi beast. The second were Jews, victims. The third, the world that knew about the “Final Solution” and did not do anything to prevent it. And the forth group were those who opposed the Nazi plans.

“We will never forget the soldiers of the Allied armies and the Red Army, which released Auschwitz, as well as about a quarter of a million soldiers, our brothers, Jewish people, who went out and did not return.”

In his greeting to the participants of the rally, Sephardic Chief Rabbi of Israel Harav Yitzchak Yosef said that he welcomes and encourages the initiative to organize an annual prayer rally on May 26, to mark the triumph of the spirit over the material. “The Nazis wanted to destroy and kill and lo and behold, the world of the Torah rose to its feet and in Israel, all the postcards gathered a world of Torah flourishing and thousands of wise students sitting and thinking in the Torah. Everything that those beasts summoned did not succeed. Although one-third of our people had been brutally annihilated, Hashem showed pity on the rest of his people.”

The Rav thanked Mr. German Zakharyayev for his initiative and said that the strength of Jewish people is in the Torah. “Keeping Shabbos and observing commandments is a real victory over the Nazis.”

Rabbi Haim Corsia said in his blessing that “the surrender agreement of Nazi Germany with the Allies was signed in the school in Reims, France. It was some kind of a message to the world that education is a priority. We must educate our child to study the Holy Torah ‘to learn and teach to keep and to do and to sustain’.” Rabbi Corsia said that every year he tries to meet with one of the Buchenwald death camp’s survivors. My friend told me that the opposite of love is not hatred but indifference. The secret of life is not to remain indifferent. To build and help between man and friend in terms of “and your brother will live with you.”

White House Representative and the Chairman of the U.S. Heritage Preservation Committee Mr. Paul Packer said President Trump sends a warm greeting to European Rabbis and to the initiator of this commemoration day, whom he called “Angel Gabriel.” “You are working to strengthen everything the Nazis wanted to destroy, to prevent the rise of anti-Semitism and to remind the world of what they did to us and those who rose up against them and subdued them. The United States is the best friend of the Jewish people and we greatly appreciate the Rabbis who do not forget and also remember where we are going.”

The initiative to celebrate Iyar 26 as the Day of Salvation and Liberation of the Jewish People was put forward by German Zakharyaev, vice president of the Russian Jewish Congress and President of the STMEGI International Fund. The number of communities celebrating this memorable date is growing every year.

In his address to the participants in the prayer, Mr. Zakharyaev thanked the Rabbis of Europe for their support of this initiative and called to remember everyone’s duty to constantly praise the Almighty, to remember his mercy and to increase his glory by prayers, charity, the introduction of the Torah scrolls and the study of its provisions, which corresponds to a centuries-old Jewish tradition.

It is noted that this initiative was blessed by many respected Rabbis. In particular, on this day, the ceremony of introducing the sefer Torah into the shul near the Kosel and into one of the yeshivos, the students of which learn six million mishnayos to commemorate the six million killed, Hy”d.

Sergei Novikov, a representative of the Office of the President of Russia, read out congratulations from Vladimir Putin addressed to all Russian Jewry. The congratulatory letter says: “Like the Day of Great Victory, the Day of Salvation and Liberation is a tribute to the unprecedented feat of the soldiers and officers of the Red Army and the armies of the Allied countries, who crushed Nazism, saved the Jewish and other peoples from total extermination. The Russian leader concluded his congratulation in such a way: “I am convinced that both we and future generations must carefully preserve the truth about the war and understand the consequences of any connivance to nationalism, anti-Semitism, racism and xenophobia.”