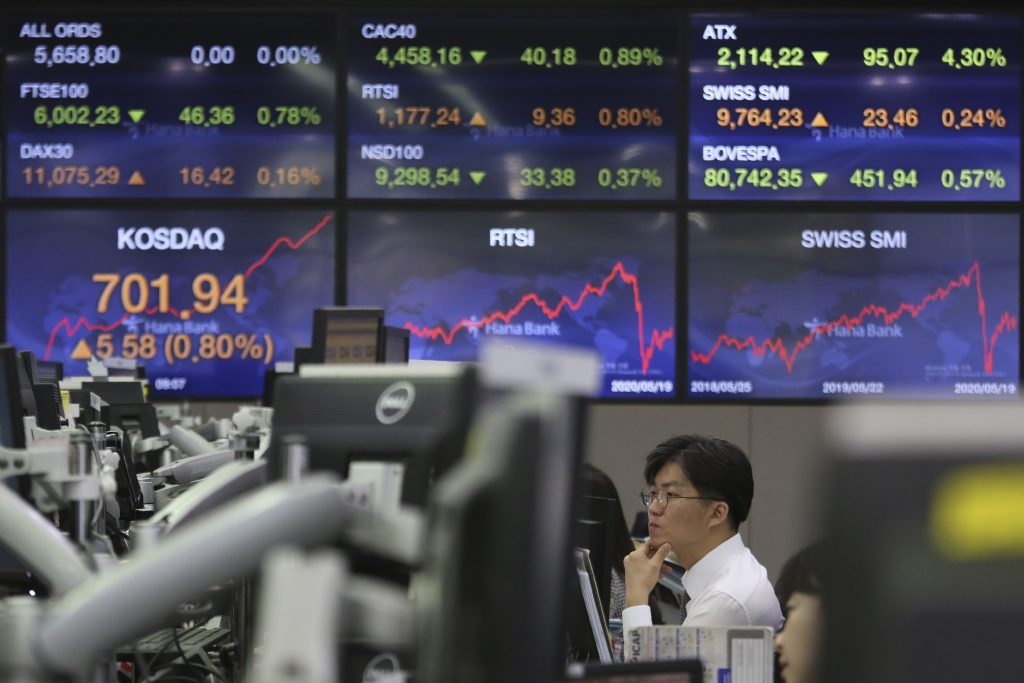 Stocks moved broadly higher on Wall Street in afternoon trading Wednesday as the market bounced back from a sudden drop a day earlier.

The S&P 500 was up 1.6%, more than it lost on Tuesday, when the index snapped a three-day winning streak. Crude oil prices headed for their fifth gain in a row.

Technology, the only sector that’s holding on to a gain for the year, accounted for much of the market’s upward move. Communication services companies and banks also helped drive the market higher. Markets in Europe and Asia also rose.

The Dow Jones Industrial Average gained 321 points, or 1.3%, to 24,529. The Nasdaq composite, which is heavily weighted with technology stocks, rose 1.9%. Small-company stocks led the rest of the market, another bullish signal, sending the Russell 2000 index up 2.6%.

“It’s a broad-based rally,” said Willie Delwiche, investment strategist at Baird. “Maybe that’s the market starting to say, ‘Okay, what does the economy look like post-lockdown?'”

Despite Tuesday’s stumble, Wall Street is on track to recoup its losses from last week amid fresh hopes for a U.S. economic recovery in the second half of the year and optimism about a potential vaccine for COVID-19. A strong rally on Monday reversed all of the market’s losses for the month. The index is still down about 12% from its all-time high in February, however.

Investors are betting that the economy and corporate profits will begin to recover from the coronavirus pandemic as the U.S. and countries around the world slowly open up again. However, concerns remain that the relaxing of stay-at-home mandates and the reopening of businesses could lead to another surge in infections, potentially ushering in another wave of shutdowns.

The market is getting some insight into how companies are navigating the economic fallout from the coronavirus this week as several retailers report quarterly results. Lowe’s and Target reported quarterly results that topped Wall Street’s forecasts, but also a sharp increase in costs related to the pandemic. That appeared to weigh on the stocks. After rising initially, Lowe’s shares were down 1%. Target fell 2.8%.

Wall Street also hammered Royal Caribbean after the cruise line operator said it booked a $1.4 billion first-quarter loss as it was forced to suspend operations due to the pandemic. Its stock briefly climbed after the company said bookings for 2021 are within historical ranges. It was down 3%.

The price of oil has made a comeback this month as oil producing nations cut back on output and the gradual reopening of economies around the globe have driven up demand. Crude oil started the year at about $60 a barrel, but plummeted earlier this year as demand sank due to widespread travel and business shutdowns related to the coronavirus.

Bonds yields were mostly lower. The yield on the 10-year Treasury note, a benchmark for interest rates on many consumer loans, fell to 0.69% from 0.71% late Tuesday.