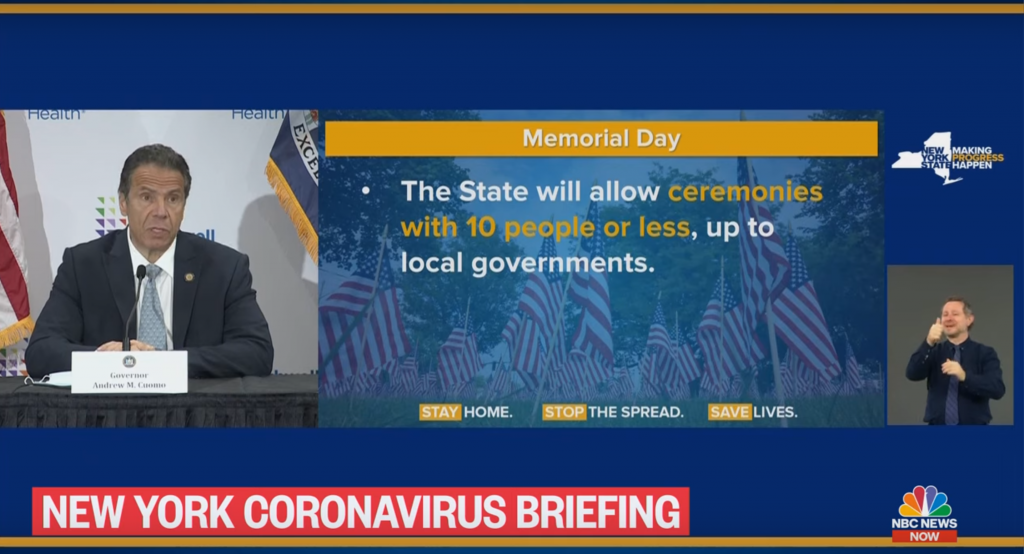 New Yorkers will be able to hold small Memorial Day ceremonies. Online schooling will continue through the summer for some 177,700 New York City public school students. And New York City Mayor Bill de Blasio said he wants to create a city without racial and economic disparities like those uncovered by new data on the impacts of the coronavirus in the city.

Here are the latest coronavirus-related developments in New York:

Ceremonies marking the Monday holiday with 10 or fewer people will be allowed by the state, but at the discretion of local governments, Cuomo said. Nonessential gatherings have been barred in New York since March, but the governor said honoring the sacrifices of military members is an “important tradition.”

Localities can also stage vehicle parades, which have become more popular during the pandemic.

Cuomo didn’t immediately explain details of what types of ceremonies or events might qualify for the exemption.

New York officials have been gradually relaxing lockdown rules as COVID-19-related hospitalizations and deaths decline. There are an average of 335 new hospitals admissions a day.

There were 105 new deaths recorded Monday.

SCHOOL YEAR STRETCHES INTO SUMMER FOR 1 IN 6 NYC STUDENTS

New York City’s virus-disrupted school year will extend into the summer for 177,700 youngsters, or about one in six students in the public school system, Mayor Bill de Blasio said Tuesday.

“We see this as a summer where unprecedented learning can happen,” de Blasio said at his daily coronavirus briefing.

School buildings have been closed since March 16 in New York City, the epicenter of the coronavirus pandemic in the United States, and efforts to move instruction online were hampered by the fact that many students lacked devices for connecting to their virtual classrooms. De Blasio said 284,000 Internet-enabled devices have been delivered to students who needed them.

Instruction will be online in the summer as well, but de Blasio has said he hopes students will be able to return to school buildings in September.

Summer school will be five days a week for high school students and four days for children in grades 3 through 8, Schools Chancellor Richard Carranza said. It will include virtual field trips and one-on-one check-ins with guidance counselors and social workers.

The six-week summer session will be either required or suggested for students at risk of being held back, Carranza said.

“We need to take this weight off the shoulders of the families of these valiant New Yorkers,” said de Blasio, who said 270 city employees have died of the virus so far.

Unions representing city workers and local elected officials have been pushing for the death benefit.

“We are glad that Mayor de Blasio has finally come around to recognizing the heroes of this crisis.,” Police Benevolent Association President Patrick Lynch said in a statement. “But it’s a long way from a press conference to legislation, so we will hold our applause until we see something in writing.”

De Blasio said the benefits should go to the survivors of all city employees, not just uniformed service members. The city employees lost to COVID-19 include dozens of teachers and school paraprofessionals.

De Blasio said he did not know how much it would cost to provide the benefit.

Racial and economic disparities in the coronavirus pandemic’s impact in New York City present a challenge for an administration that has sought to fight inequality, de Blasio acknowledged Tuesday.

“There’s a lot we’re going to do right now but the big question is going forward: how do you create a city where these disparities don’t exist?” de Blasio said on WPIX.

Data released by the city Monday showed that the coronavirus has hit hardest in low-income neighborhoods outside of Manhattan. The data showed that black and Hispanic New Yorkers were more than twice as likely to be killed by the virus as white people.

De Blasio, a Democrat who first ran for mayor in 2013 vowing to end the “Tale of Two Cities,” said the city is meeting the coronavirus threat in severely affected communities through beefed-up testing for the virus as well as outreach “to make sure people have the information they need to protect themselves and their families.”